A Quick Overview of Molecular Cloning

Molecular cloning is a basic technique in molecular biology and biotechnology laboratories. It is a useful tool to study a gene, modify the gene, reintroduce the modified gene into the natural host or another host, or to produce protein. You can perform molecular cloning by incorporating a piece of DNA into a plasmid (a recombinant DNA) to make more identical recombinant DNA in a living host. Things to consider before you clone are the availability of your cloning materials, the goal of your research (such as to sequence a DNA fragment or to produce a protein), and the difficulty level to perform your protocol.

To begin with, you have to prepare some important materials for cloning:

A vector is a DNA molecule which can carry a DNA insert to generate a recombinant DNA and replicate in a particular host.

Some examples of vectors are:

Elements in a plasmid vector:

After a DNA fragment is incorporated into the plasmid vector, the next cloning step is to perform a transformation step. In this transformation step, the recombinant DNA is introduced into the competent cell by chemical reaction or electroporation. Competent cells are cells which are temporarily permeable to extracellular DNA.The host organisms which are commonly used in the laboratories are Escherichia coli and Saccharomyces cerevisiae.

Selective medium is a growth medium containing a selective agent to grow the transformed host. When you choose antibiotic selection for cloning, your growth medium must contain antibiotics. The most common antibiotics used for selection are Ampicillin, Kanamycin, and Chloramphenicol.

There are several different approaches to clone and you will need to find the right approach for your research. Below are some examples of popular cloning methods to generate a recombinant DNA construct:

PCR cloning relies on a process called ligation, which is a method of inserting a DNA fragment into a vector using DNA ligase. The reason ligation is important for this step is because it is responsible for inserting the PCR product into a ‘T-tailed’ plasmid.

PCR amplified inserts contain an adenine residue at the 3’ end of the DNA fragments (‘A-tailed’ ends). A ‘T-tailed’ plasmid vector has a single 3’ deoxythymidine (T) at each end of the arms of a linearized plasmid. Therefore, these PCR products can be ligated into ‘T-tailed’ vectors by using DNA ligase, and this step is followed by transformation.

One disadvantage of this method is you will need a specific ‘T-tailed’ vector to perform PCR cloning. But ‘T-tailed’ vectors may not have supportive elements for your protein research, such as promoter region or protein tag.

PCR Cloning. 1. PCR Product with A-tailed ends is combined with T-tailed vector. 2. During ligation, PCR product is inserted into the vector.

Ligation independent cloning (LIC) is performed by generating short sequences at the end of a DNA insert that match to the short sequences of a plasmid vector. Enzymes with 3’ to 5’ exonuclease activity chew 3’ ends and generate cohesive ends between the DNA fragment and the linearized vector. The two materials are then combined for annealing step. During transformation, the host organism repairs the nicks on the recombinant DNA.

The advantage of this method is it won’t create any new restriction sites or unwanted sequences in the final DNA construct. 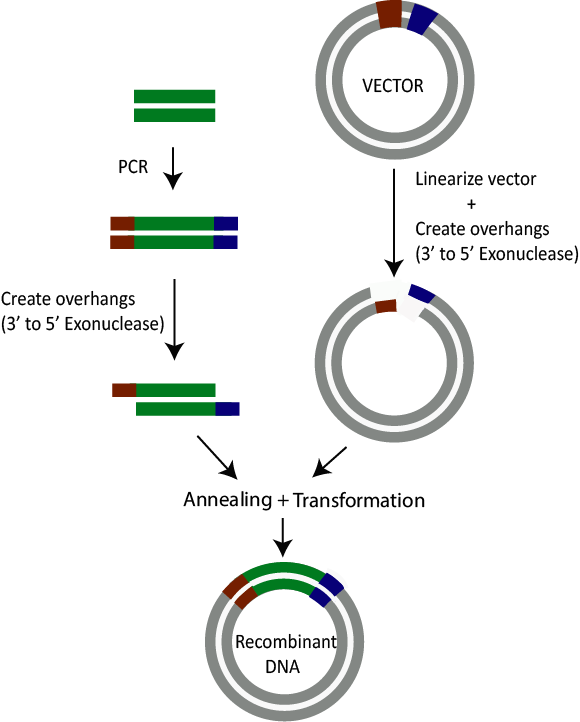 LIC Cloning. 1. Short sequences which matches with sequences on the plasmid are added into the 5’ ends of primers for DNA amplification by PCR. 2. Plasmid is linearized by using restriction enzyme. 3. Both DNA insert and vector are treated with 3’ to 5’ exonuclease to create cohesive overhangs. 4. Both DNA and vector are annealed. 5. After transformation, the host cell repairs the nicks on the recombinant DNA.

The seamless cloning (SC) technique (similar to LIC) depends on matching short sequences at the ends of a DNA fragment to the short sequences on a plasmid vector. SC method requires an enzyme with 5’ to 3’ exonuclease activity to create 3’ overhangs, a DNA polymerase to fill in gaps, and a DNA ligase to seal the nicks.

Seamless Cloning. 1. Short sequences are added into the 5’ ends of primers for DNA amplification by PCR. 2. Vector is digested by a restriction enzyme. 3. Both DNA fragment and vector are treated with an enzyme with 5’ to 3’ exonuclease activity to create cohesive overhangs. 4. During ligation, the DNA fragment is inserted into the vector.

After creating an entry clone, the next step is to swap and recombine the entry clone into a destination clone. The benefit of this approach is it can be used to place more than five elements into a single vector. It is commonly used to identify protein-binding interactions or to optimize protein expression, purification and solubility. To perform this method, you will need a particular plasmid which has recombination sites.

Recombinational Cloning. 1. DNA fragment is inserted into an entry vector to create an entry clone. 2. Entry clone and destination vector are combined by a recombinase enzyme to create a destination clone.

In this article, we briefly explained about five molecular cloning methods which are commonly used by researchers. Molecular cloning has been used for many different purposes in a variety of research fields. In agriculture, cloning can shorten the time required to insert and develop a new beneficial trait in crops, such as a drought tolerant trait or a pest resistant trait. On the other hand, molecular cloning can be used to produce therapeutic proteins, such as a clot dissolving protein and interferon, or to synthesize other useful proteins, such as insulin, growth hormones, and monoclonal antibodies. Overall, the application of molecular cloning continues to improve and create more remarkable developments in the fields of agriculture, pharmaceutical industry, and biomedical research.

How to Troubleshoot Restriction Enzyme Based Cloning Problems
Since the early 1970s, restriction enzymes have become an important part of cloning and many other a...
A Quick Overview of Molecular Cloning
Molecular cloning is a basic technique in molecular biology and biotechnology laboratories. It is a...
Molecular Cloning: A Detailed Introduction
Molecular cloning is a primary procedure in contemporary biosciences. This involves introducing a sp...
Overview of T4 DNA Ligase: What it is, how it works, reactions, and more
T4 DNA ligase is an enzyme that fixes broken DNA and seals it – similar to super glue. This particul...