Molecular cloning is a primary procedure in contemporary biosciences. This involves introducing a specific piece of DNA (most often a gene) into a cell where it does not generally belong. Furthermore, this process ensures that this foreign DNA fragment replicates (copies itself) and expresses itself (through transcription) in the new host.

Restriction enzyme digest of the plasmid and fragment of interest

Introducing the recombinant plasmid into the recipient host

Selecting the correct clone from the transformed colonies

Monitoring expression of the cloned transgene

A basic schematic representation of the molecular cloning process is depicted below in Figure 1. 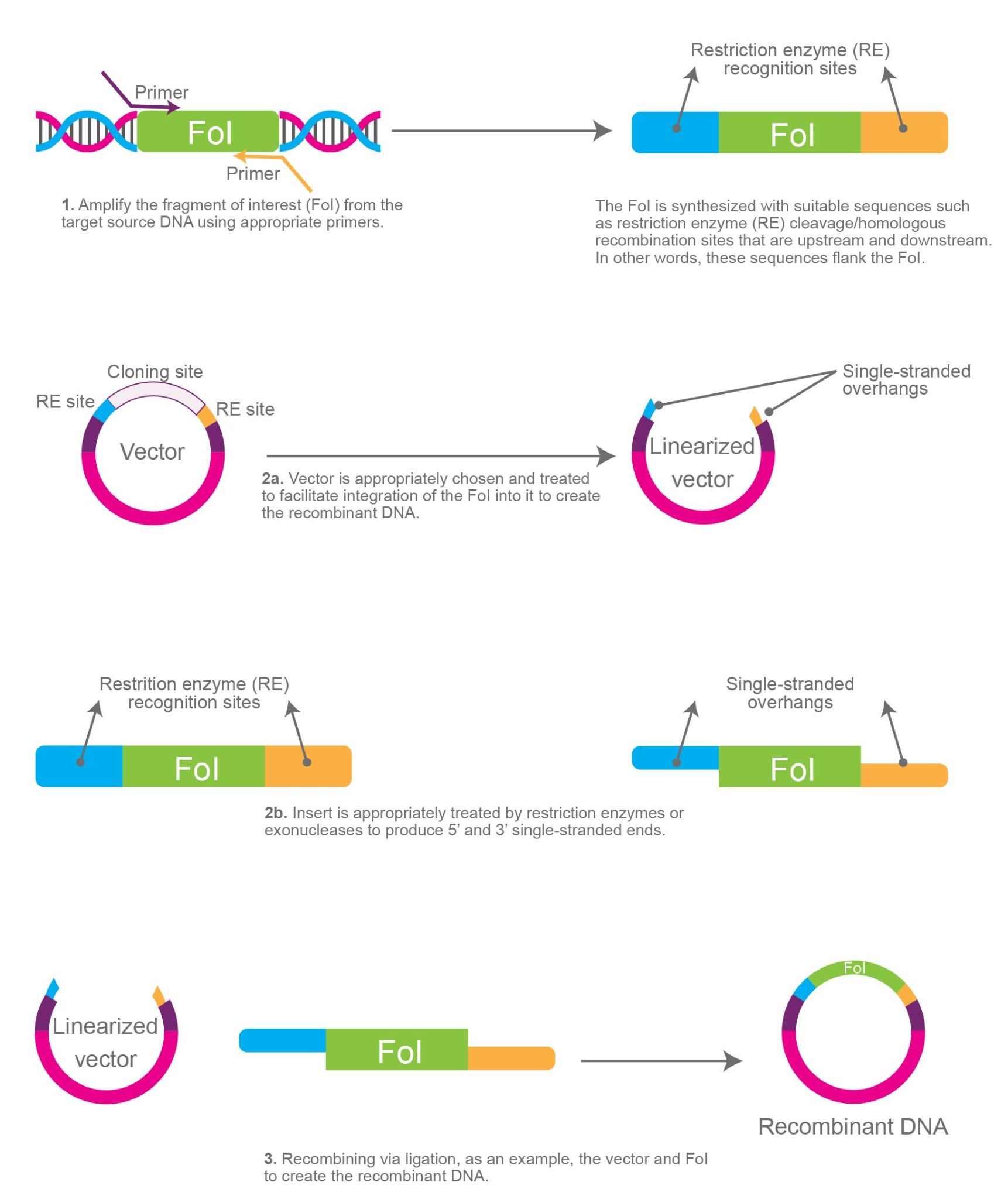 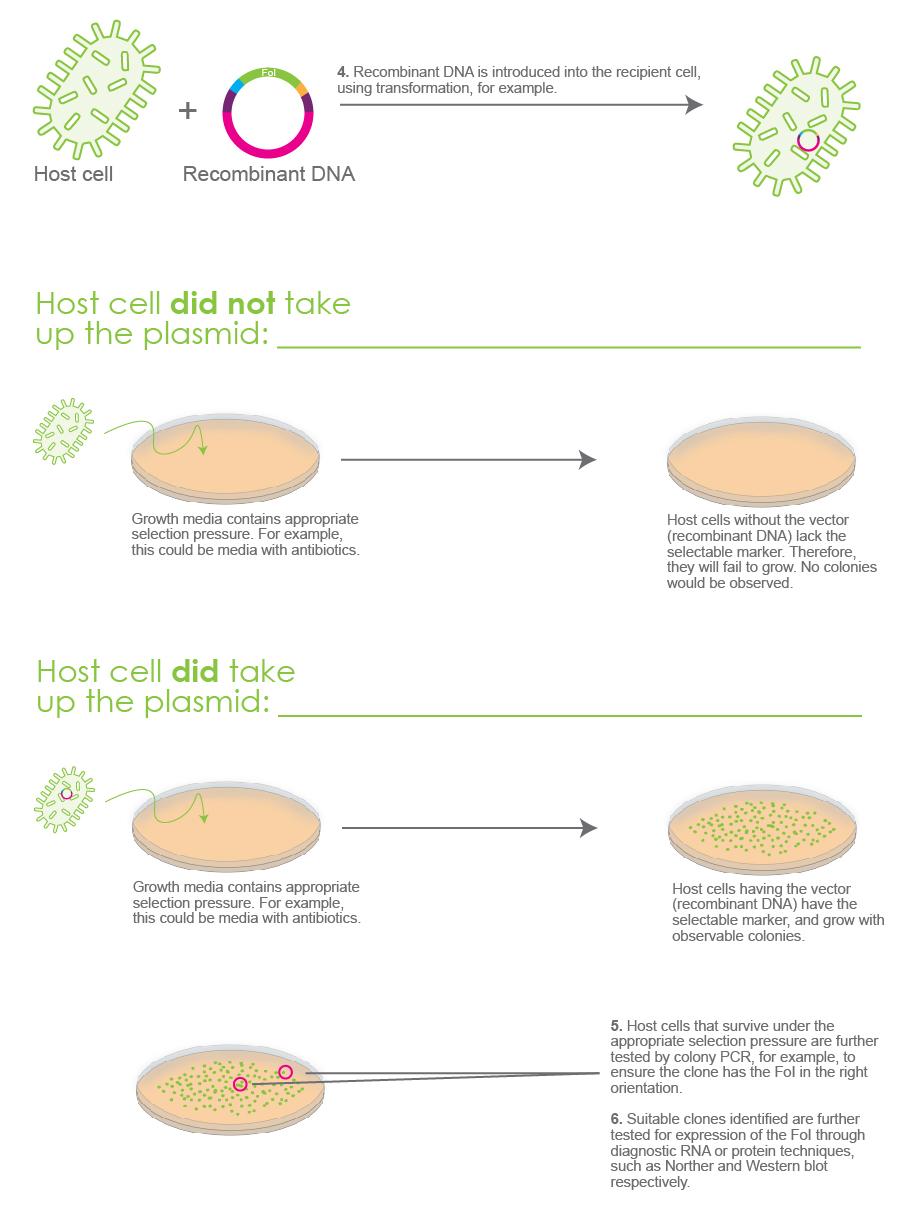 In this article, we provide a brief discussion on the molecular cloning steps using the most common cloning method, the restriction enzymatic digestion of plasmid and fragment of interest, as a prototype example.

This is followed by a small section comparing some specialized cloning techniques.

The first step in molecular cloning is to identify and prepare your DNA fragment of interest (FoI).

Often, the FoI is sought from a source of DNA which may be scarce or contaminated.

Primers can be appropriately designed such that the amplified insert fragment contains specialized sequences such as restriction enzyme sites or homologous recombination sequences at both ends (Figure 1). Fidelity of the fragment of interest to be cloned is generally checked by sequencing prior to cloning into the vector.

Alternatively, the fragment of interest can be purchased from companies that synthesize nucleic acid fragments based on ordered sequences. In this approach, specialized upstream and downstream overhangs are ordered as part of the synthetic DNA sequence.

A “vector” transfers the DNA fragment of interest (FoI) into the host cell just as an insect acts as a vector transmitting diseases.

To understand the structural elements of a vector, and how they are useful in molecular cloning, let us look at a plasmid as a prototype example.

Schematic description of a plasmid

Plasmids are one of the most commonly used vectors in molecular cloning. A plasmid has the following basic features:

Figure 2: Schematic diagram of a plasmid 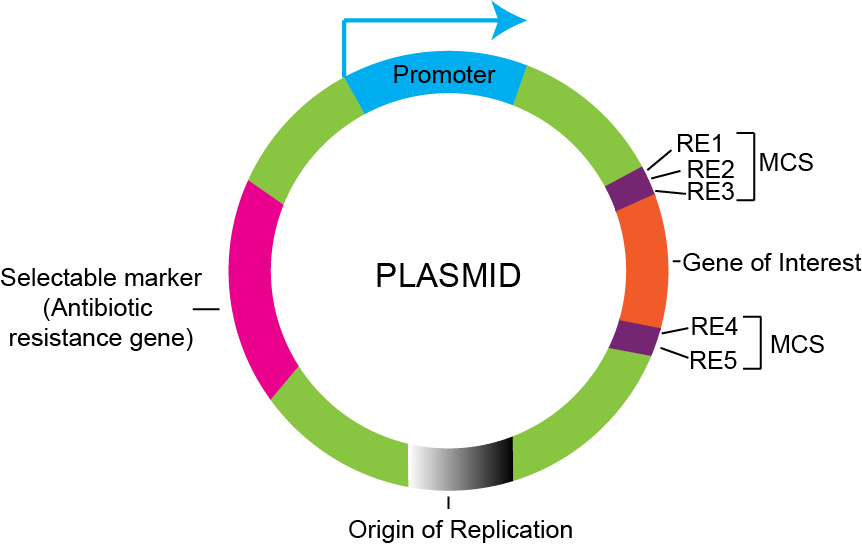 As shown in figure 2, here are the important structural elements of a plasmid:

2. Selectable marker: The plasmid backbone has at least one gene that distinguishes cells having the plasmid from cells that do not have the plasmid. Most commonly, plasmids have genes that confer resistance to antibiotics. Thus, bacteria with the plasmid will grow on a plate with the antibiotic selection pressure, while the ones without the plasmid will die out. Since such genes serve as a ‘marker’ for positive selection, they are termed ‘selectable markers’. How they are critical in molecular cloning is described later.[1]

3. Multiple Cloning Site (MCS): This is the site on a plasmid where the transgene can be cloned. This region has multiple restriction enzyme cleavage sequences, which enables cloning the insert fragment at a defined location on the plasmid and in a specific orientation. For details please see the section below on “Restriction enzyme digest of plasmid and fragment of interest.”

4. Promoter: In this region, the RNA Polymerase enzyme binds and drives expression of the genes downstream. Please note from figure 2, the MCS, where the transgene is cloned, is downstream of the promoter; hence transcription of the cloned fragment is ensured. The promoter can be constitutively active. Alternatively, a conditional promoter drives transcription in response to selective stimuli. Therefore, expression of the transgene can be engineered to be constitutive or highly regulated by choosing a suitable plasmid vector.

Types of vectors in molecular cloning

The primary vectors used in molecular cloning are plasmids, cosmids, viral vectors and artificial chromosomes. Each has important features that determine which is the best for use.

Restriction enzyme digest of the plasmid and fragment of interest

The multiple cloning site (MCS) of the plasmid vector has multiple restriction endonuclease (RE) cleavage sites.

For a specific cloning reaction, the REs are appropriately chosen to produce compatible “sticky ends” between the RE-digested vector and the insert. Typically, the same REs are used to digest both the insert and vector DNA molecules.

Figure 3A schematically depicts the mechanism of RE action, and how that is exploited in a cloning reaction is described in Figure 3B. 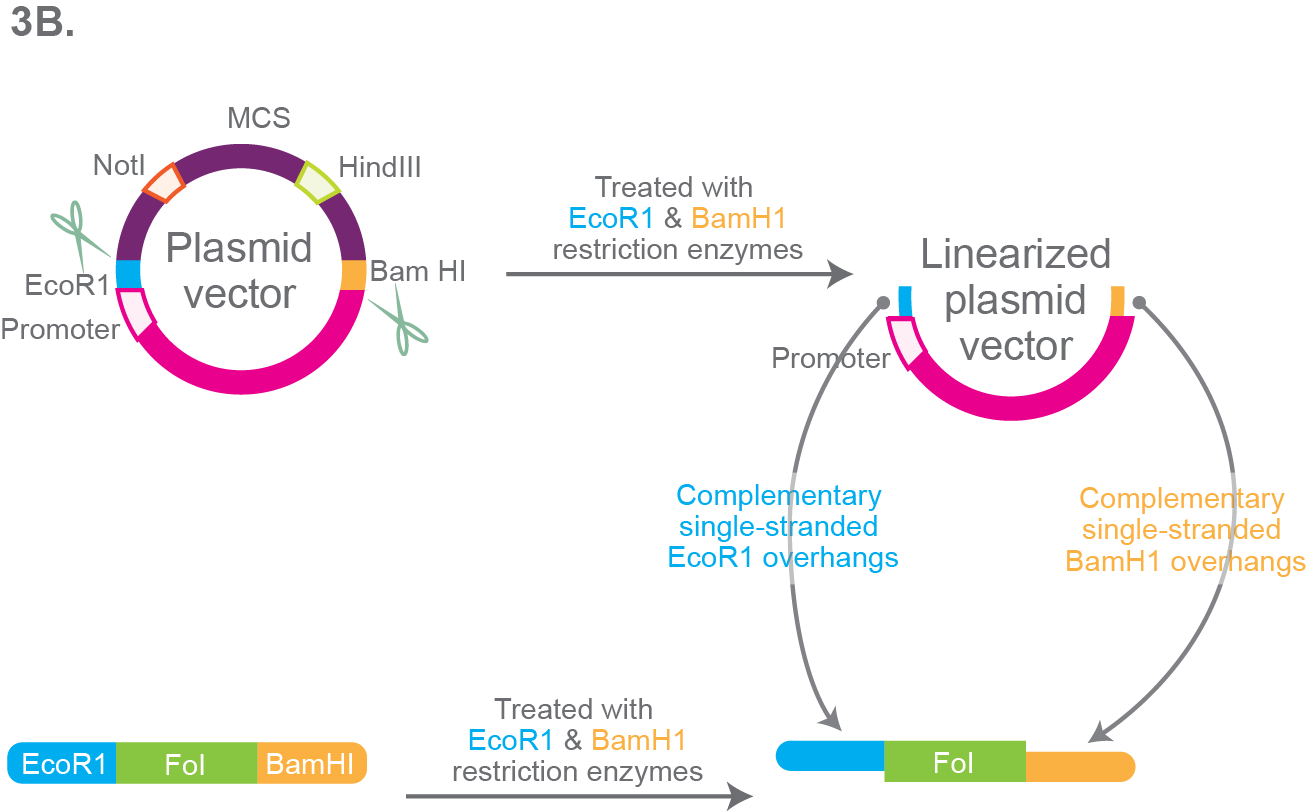 Now that we have restriction enzyme-digested inserts and plasmid molecules, an enzyme called DNA Ligase is used to covalently stitch (ligate) the fragment of interest (FoI) into the plasmid backbone.

DNA ligase catalyzes phosphodiester linkages between adjacent nucleotides of the plasmid and the fragment of interest (FoI), in this case. Further, digestion of the FoI and plasmid by the same restriction enzymes (REs) produces single-stranded overhangs which are complementary to each other and tend to readily “stick” (base pair) with each other. This allows the insert to be chemically sutured to the digested plasmid at both ends resulting in a re-circularized plasmid, but this time harboring the FoI.

At this point, the recombinant plasmid molecule has been constructed. Figure 4A schematically describes a ligation reaction. Figure 4B describes how this is used in molecular cloning.

Figure 4. Schematic representation of a DNA ligation reaction during cloning 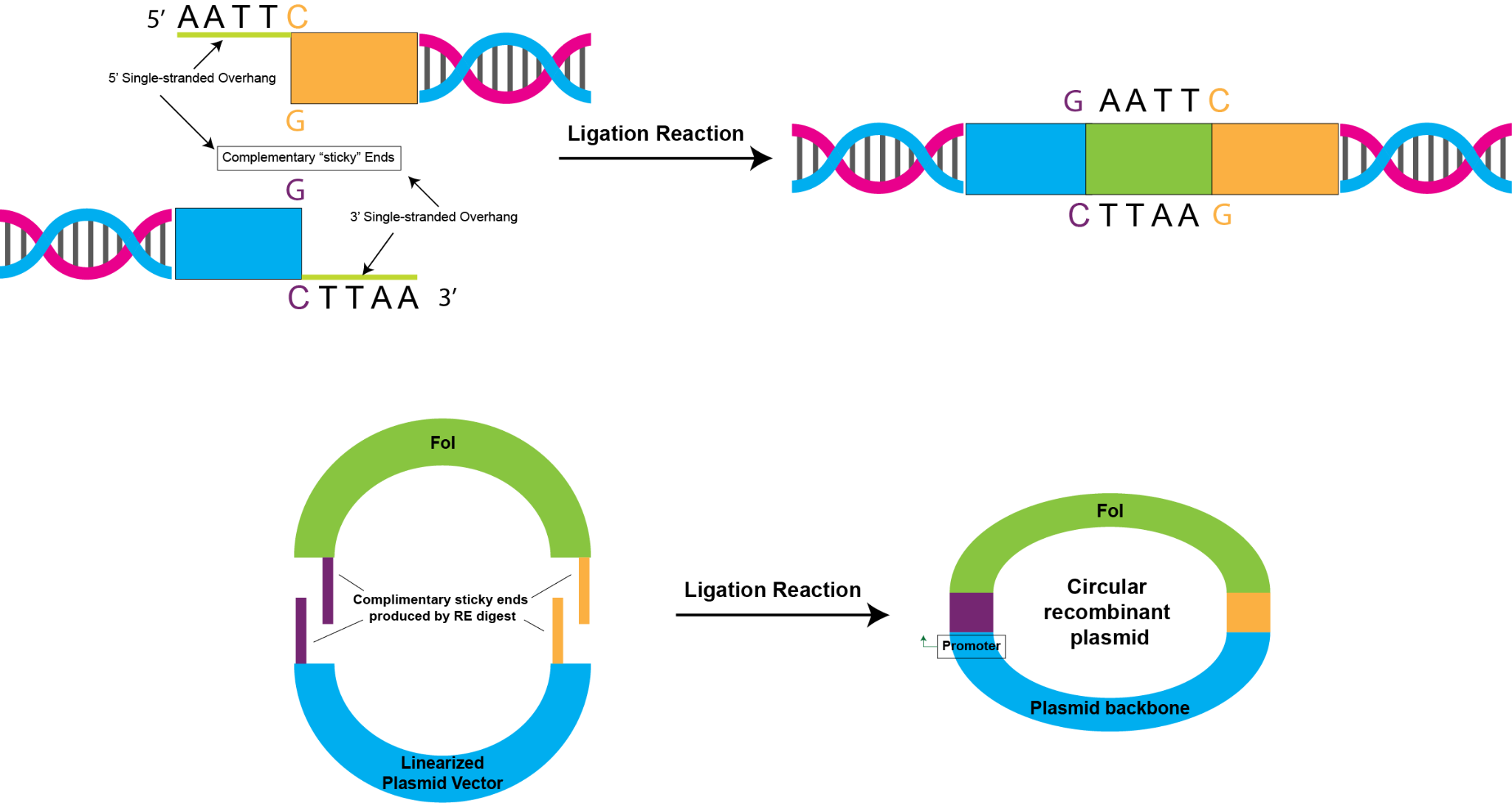 Introducing the recombinant plasmid into the recipient host

Bacterial cells are treated appropriately, which make them “competent,” or able to take up the recombinant plasmid prepared in the previous step.

To learn more about competent cells, their importance, how they work and how they’re made, we have two really useful articles with more detail.

Once these “competent cells” indeed take up the plasmid construct, they are phenotypically “transformed” owing to the genes encoded by the plasmid, most notably the antibiotic resistance selectable marker.

Hence this procedure is called “bacterial transformation.” After this step when the host bacterial cells are plated onto solid media containing the appropriate antibiotic (selection pressure), only those that indeed have taken up the plasmid survive as colonies and are thus selected over the non-transformed cells.

Selecting the correct clone from the transformed colonies

While colonies obtained in the last step have the plasmid, it still needs to be determined whether the plasmid is indeed the recombinant construct harboring the fragment of interest (FoI) or if it is merely the blank vector that has self-ligated (and thus, recircularized) at the ligation step.

Many sophisticated short-cuts, such as the blue-white screening method, are now available to visually screen correct recombinant clones versus those with the blank plasmid.

In the diagnostic RE-digest method, the recombinant construct gives a different band pattern on the agarose gel than the blank plasmid.

Monitoring expression of the cloned transgene

Most commonly, molecular cloning is performed to overexpress a transgene (gene of interest from an organism), or to study the phenotype conferred by it.

So it is critical to ensure that the FoI is indeed getting expressed in the target host cell. For this, Northern blot or quantitative Real-time PCR is employed to monitor transcript expression of the FoI. If the FoI is a protein coding gene, Western blot may be utilized to detect expression of the final transgene product.

As evident from Figure 1 and described in detail using the restriction endonuclease (RE) digestion mediated cloning as an example (Figures 3-4), the basic underlying principle in molecular cloning involves:

The various cloning techniques basically vary in the machinery they use at either of these two steps.

As shown in table 1, instead of RE-mediated single-strand overhang production, other techniques may use specialized exonucleases for this purpose of generating overhangs.

Similarly, instead of ligation, bacterial cellular machinery (see LIC in table 1) may be harnessed to seal the nicks between nucleotides of adjacent fragments that are getting stitched together in the cloning reaction. A brief comparison between common techniques, including their methodology, advantages and disadvantages is listed in table 1.

Molecular Cloning: A Detailed Introduction
Molecular cloning is a primary procedure in contemporary biosciences. This involves introducing a sp...
Bacterial Transformation Deep Dive: What it is, its importance & workflow
Bacterial transformation is a genetic process where bacterial cells take up foreign DNA from the ext...
Lambda Red Mediated Recombineering
Over the years, scientists learned to exploit many aspects of genetic engineering using bacteriophag...
Overview of T4 DNA Ligase: What it is, how it works, reactions, and more
T4 DNA ligase is an enzyme that fixes broken DNA and seals it – similar to super glue. This particul...