Art and Science: An Eternal Relationship

How is science involved with art? Neither seems to have much directly in common. But one of art’s intimate connections with science is based on protection and creation.

Every human-crafted artifact that accumulates chronicles our history, ideals, culture – it satisfies our need to leave a footprint behind that says, “the human race was here, and it was special.”

We value our legacy, talent and the tangible pieces that define humanity so much that saving it was even an effort during World War II. In 1943, the American Commission for the Protection and Salvage of Art and Historic Monuments in War Areas was established to recover stolen art from Nazis. And the group’s heroes were later recognized in books, and in the more recent film “Monuments Men.”

Unfortunately, time makes mortals of everything, and does its work rapidly. Soon after the ceiling of the Sistine Chapel was finished, the artwork faced usual water damage and other environmental punishment. The earliest conservation techniques involved linseed oil and walnut oil. However, this only minimized the effects of salt buildup on the frescoes. During the 17th century, bread was rubbed on Michelangelo’s famed religious depictions in a restoration effort. And later, several glues and varnishes were applied to brighten colors. But these methods were not lasting.

Our desire to immortalize masterpieces has driven us to dream up more effective methods of protection. Now, with a greater understanding of chemistry and physics, the discipline of conservation science has become more and more refined. Various acids, surfactants and enzymes such as trypsin and pepsin are used for preservation and restoration procedures.

A more recent innovation, however, included some real biology. Frescoes in the Church of Santos Juanes in Valencia, Spain suffered major fire damage during the Spanish Civil War. And restoration attempts in the 1960s were not long-term. One of the primary issues that modern conservators faced was removing the buildup of glue and salt efflorescence without causing damage.

To solve this problem, biologist Pilar Bosch looked to the bacterium Pseudomonas stutzeri. This gram-negative species has been known for its denitrification abilities and uses a number of carbon compounds for nutrition. But Bosch came up with a more tailored approach to nourish the bacterial strains, which would be mutually beneficial. She developed P. stutzeri strains that were essentially trained to eat through the salt buildup. Bosch and her team did this by growing strains in culture with the substrate conservators wanted to remove.

This process offered a more specific tactic that was also less toxic. Typically, modern conservators use various chemicals and machines to restore frescoes and other works of art. But chemicals can be less targeted and unsafe for workers.

Though this project happened in 2011, it’s a unique example of blending multiple disciplines to keep art alive, and attests to our deep need to fortify fragments of our existence.

Of course, we would have no fragments to protect if it weren’t for science because science is also the gatekeeper of art creation. 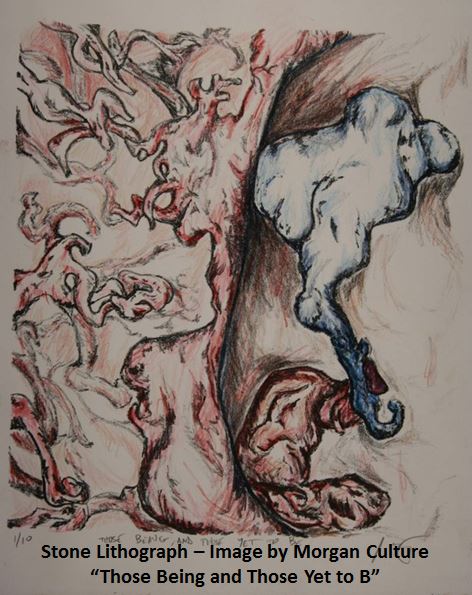 If you stood back and thought about the reaction between oil paint and canvas in the presence of oxygen, you would notice that painting is truly a scientific process, but it’s one example that is justifiably overlooked. However, lithography better illustrates an artistic technique based on science - the science of oil and water.

Stone lithography involves very smooth limestone that artists and printmakers draw on using a grease pencil. The stone with the drawing is treated with gum arabic and acid, leading to micro-etches into the thick, smooth sheet. The tiny pores left in the stone are filled with an oil-based ink that is ready for printing. It’s these known, chemical love-hate relationships that have allowed us to develop new crafts and new techniques, enabling us to share more knowledge and inspiration.

Lithography is only one example of how science plays a role in the creation of art. Photography, textile production, ceramics, metal sculpture and other artistic methods all require science to create and science to protect.

Art and Science: An Eternal Relationship
How is science involved with art? Neither seems to have much directly in common. But one of art’s...
Unconventional Uses of Microbes: How Bacteria Becomes Art
You don’t usually hear the word “beautiful” when discussin...

The Importance of Not Getting Scooped - You Only Think You Have Time
“David, you do realize that she is in Boston and it is 12 p.m. there, don’t you? She is trying to...
Behind Honey's Healing Power
For a few millennia, mankind has used honey as food and a healing agent without knowing how it worke...