In biotechnology and biology, a gelling agent is a reagent added to liquid media to make cell culture media solid or semi-solid. Gelling agents are important in cell and tissue culture because they provide a structured support for growth.

Gelatin was the first gelling agent discovered, and it paved the way for agar, phytagel, and other gelling agents with properties well suited for biotechnology.

Outside of general molecular biology, gelling agents are also used in food and cosmetics.

What is a gelling agent?

How a gelling agent influences the culture process

What is a gelling agent?

Gelling agent is a reagent made of polysaccharides, which are large molecules made of simple sugars like glucose that form gels through a three-dimensional structural network providing a semi-solid or solid surface (Das et al., 2015).

Gelling agents can come from microbial or plant origins, such as the bacteria Xanthomonas campestris and seaweeds.

These different origins also mean gelling agents will differ in their gelling properties.

Gelling agents are used in food and cosmetic to give thick or creamy textures. But gelling agents also have superior uses in other fields like molecular biology, microbiology and tissue culture.

In microbiology, a solid medium is used for bacterial and cellular growth and isolation. For plant tissue culture, gelling agents offer plants support and direct physical contact with nutrients to promote their growth.

Gelling agents are also used in plant transformation to facilitate the separation of positively transformed plants.

Each differs in their origin, level of impurities, and composition.

Below is a table with the commonly used gelling agents.

Table 1. Gelling agents along with their origin, properties and applications

Other gelling agents being explored include cellulose, carbomer, potato, and cassava starch.

How gelling agents influence the cell and tissue culture process

Gelling agents affect gel strength and diffusion in the culture media. Consequently, these characteristics influence the growth of the tissue or bacteria in the culture.

Gel strength refers to the force that must be applied to cause a gel to break. Each gelling agent has a different level of gel strength. This gel strength influences cell and tissue culture performance.

For instance, in plant tissue culture, a high gel strength (or a hard solid media) may favor some plants' root formation or enhance somatic embryo development.

However, a very hard solid media may make diffusion of nutrients to the microorganisms more difficult, which will affect growth and isolation.

The gel strength is also an intrinsic property of each gelling agent.

For instance, agar has a higher gel strength than GelRite and carrageenan, which could be due to the chemical composition and level of impurities.

The diffusion rate refers to the change in the amount of molecules/nutrients moving through the medium.

The diffusion rate is determined by medium viscosity, which depends on the gelling agents' chemical properties.

Therefore, this parameter determines the availability of oxygen, water, and nutrients to the explants in plant tissue culture and microbiological applications.

Furthermore, more opaque gelling agents (such as those derived from seaweed) contain more impurities which could affect the diffusion of the nutrients and make contamination detection difficult. 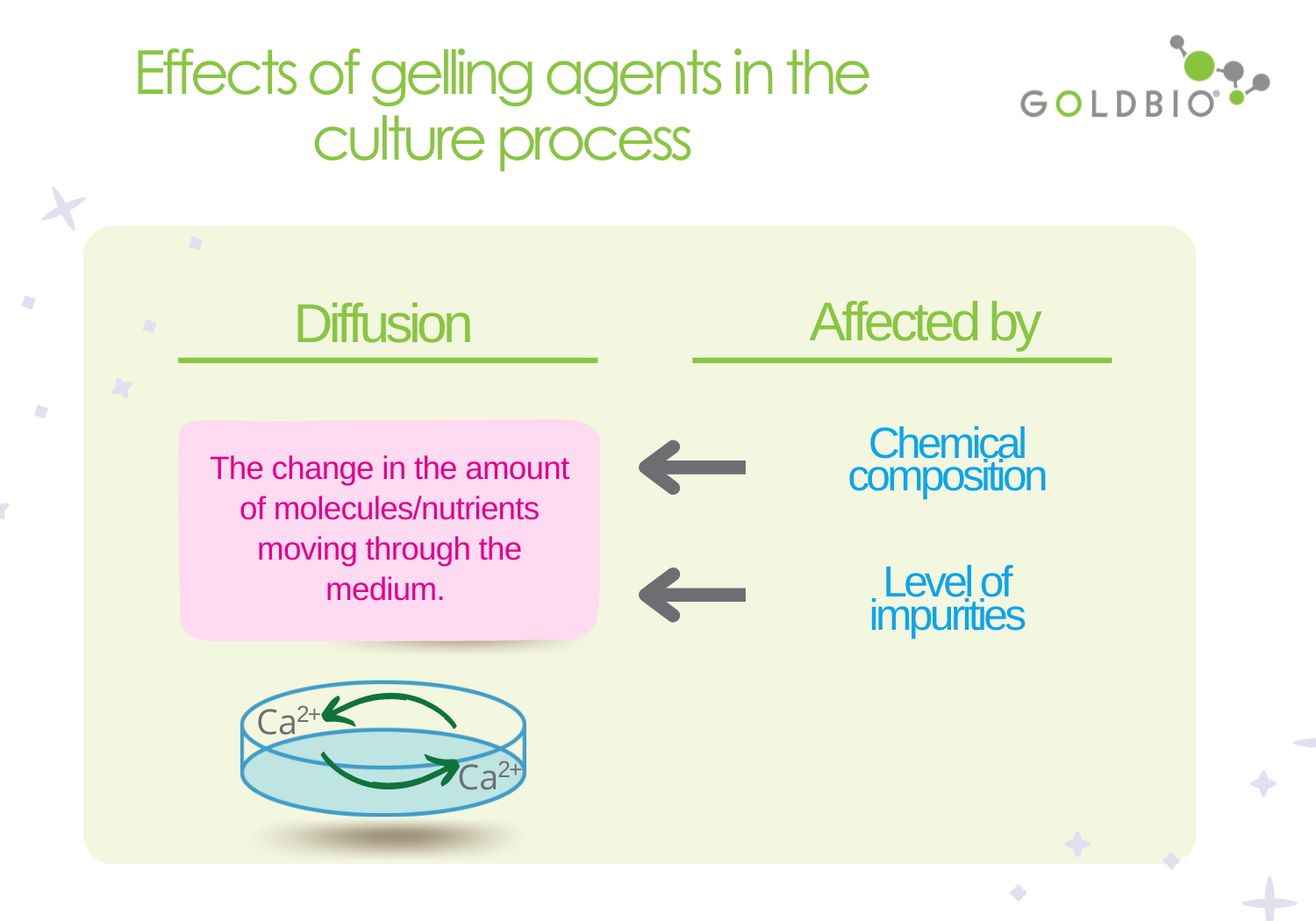 Media Gelling Agents Overview
In biotechnology and biology, a gelling agent is a reagent added to liquid media to make cell cultur...
How To Choose A Gelling Agent For Your Experiment
Choosing a gelling agent depends on your needs for your in vitro culture medium. Factors to consider...
Troubleshooting Culture Media Clumping and Vitrification
Researchers usually encounter two problems when working with gelling agents. They are clumping, and...
Reducing Agents (part 1 of 4) - Dithiothreitol
There are a number of reducing agents that are available at Gold Bio: DTT (dithiothreitol), DTE (dit...