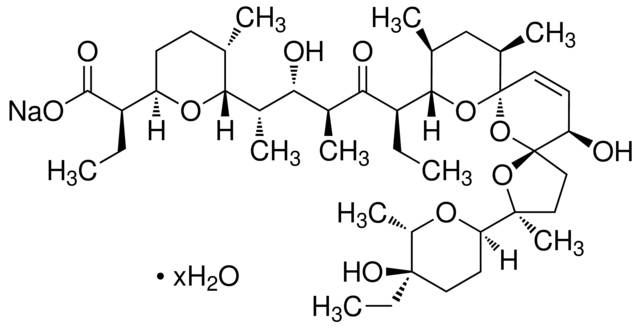 Salinomycin is a coccidiostat ionophore antibiotic isolated from Streptomyces albus. It increases cation movement across cell membranes through exchange-diffusion, resulting in altered gradients due to a lack of control of ion permeability. This effect allows ions (K+, Na+, Ca+, Mg2+) to accumulate inside the cell, reaching toxic levels. Salinomycin sodium is freely soluble in aqueous solution.

Salinomycin targets gram-positive bacteria; however, gram-negative bacteria is not susceptible to salinomycin due to its additional outer membrane. Salinomycin has been shown to induce apoptosis in a variety of cancer cell lines and to inhibit multidrug resistance protein 1.