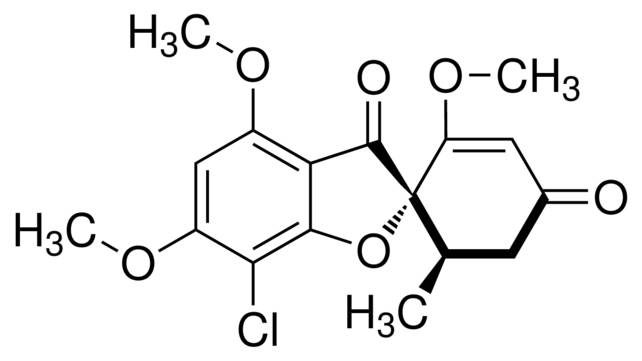 Griseofulvin is a fungistatic antifungal that targets microtubules. Isolated from Penicillium griseofulvum, Griseofulvin binds tubulin and interferes with mitosis and nucleic acid synthesis. It is effective against fungi causing tinea such as Microsporum, Epidermophyton, and Trichophyton. It has also been shown to promote apoptosis in in vitro studies of human tumor cell lines.

Griseofulvin is often used in clinical in vitro tests known as antimicrobial susceptibility tests or ASTs to determine their efficacy against certain bacterial species. They are tested against gram-negative and gram-positive bacteria using panels, discs, and MIC strips by medical microbiologists. ASTs decrease the risk of using an antibiotic against bacteria exhibiting resistance to it, and the results are used in clinical settings to determine which antibiotic(s) to prescribe for various infections.

Storage/Handling: Store at 4°C.
This product is soluble in water (8.6 µg/ml).