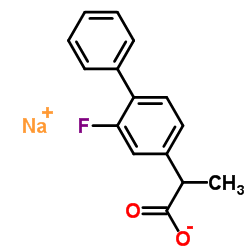 Flurbiprofen sodium is the salt form of a phenylalkanoic acid that is part of the non-steroid anti-inflammatory drug (NSAID) family. It functions as a cyclooxygenase (COX) inhibitor and as an antimiotic. Flurbiprofen sodium has also been used to investigate in vivo novel drug delivery systems.

Flurbiprofen sodium strongly inhibits two forms of the human COX enzyme: COX-1 and COX-2. Both enzymes catalyze the synthesis of prostaglandin, a pro-inflammatory lipid, from arachidonic acid. COX-1 however has been found to influence other physiological processes such as mucus and acid secretion in the stomach. Antimiotic effects observed with flurbiprofen sodium use is due to decreased prostaglandin levels.