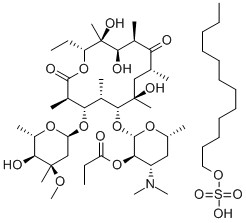 Erythromycin is a macrolide antibiotic isolated from Streptomyces erythreus. It displays strong efficacy against gram-positive cocci and bacilli and some mycobacteria, mycoplasma, and spirochetes. In addition to its antimicrobial properties, erythromycin is a motilin receptor agonist that has been shown to inhibit respiratory glycoconjugate secretion in vitro. Erythromycin estolate is freely soluble in organic solvents.

Storage/Handling: Store at 2-8°C.  This product is light sensitive.