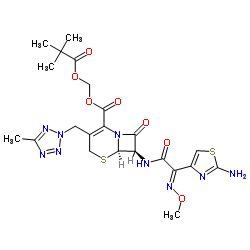 Cefteram pivoxil is a semi-synthetic third generation cephalosporin antibacterial that is a prodrug ester of cefteram. It has been seen to express greater bactericidal predominantly against gram-negative bacteria. Cefteram pivoxil has also induced IgE antibody immune responses during in vivo immunology studies.