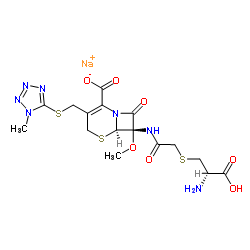 Cefminox sodium is a second generation β-lactam cephalosporin antibiotic that also a sodium salt. Additionally, cefminox sodium has exhibited a high degree of activity towards gram-negative and anaerobic bacteria. Cefminox has also been used to observe the effects of antibiotics on immunosuppressor and human serum albumin complexes.