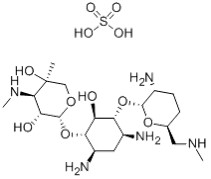 Micronomicin sulfate is an aminoglycoside antibiotic effective against gram-negative bacteria. It is freely soluble in water.