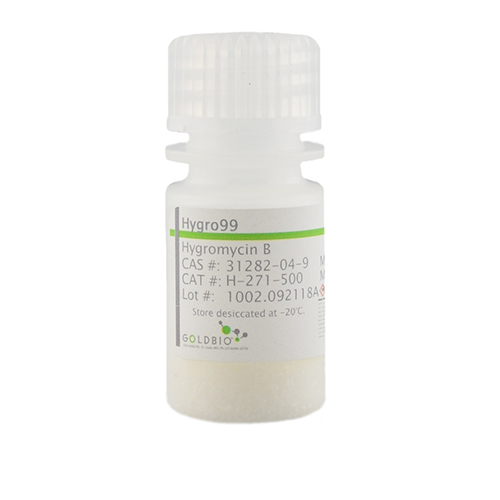 Hygro99 is the purest form of Hygromycin B available. It is over 99% pure and should be used for the most sensitive applications and on the most sensitive cell lines. All impurities that might cause inhibition of resistant cell lines have been removed. In general, our Molecular Grade Hygromycin B (which is still ≥92 % pure and less expensive) will not adversely affect your cells and is suitable for most experiments.

Both Hygro99 and Molecular Grade Hygromycin B appear equal in the concentration of their functional units per mg of material as measured in our GoldBio hygromycin unit assay. However, this apparent anomaly is most likely due to the level of sensitivity of the hygromycin assay.

Hygromycin B is an aminoglycoside antibiotic isolated from Streptomyces hygroscopicus. It is commonly used to study protein synthesis. Aside from its efficacy against bacteria, fungi, and higher eukaryotic cells, hygromycin B is also an antiviral agent inhibiting translation upon selectively entering cells made permeable due to viral infection. It works as a standard selection antibiotic in gene experiments, especially for selection of hygromycin resistance gene transformed cells.

This product has been tested against both sensitive and resistant cells at Gold Biotechnology Labs.

ONLY AVAILABLE IN CONTINENTAL UNITED STATES

N.B.
International shipments MUST be shipped by air (including Canada and Mexico). Shipments of 25 g, 50 g and 100 g will be shipped as multiples of 25 g units to qualify for the small quantity exception. 500 g pack sizes are a hazardous shipment and will incur a hazmat fee, which we estimate to be $65.

Developing a Titration Kill Curve for cell cultures with G418, Hygromycin and Puromycin