GoldBio's HEPES is tested in GoldBio's labs for consistent quality and high purity.

Order now, and join the other researchers who depend on GoldBio's high-quality, highly published HEPES and save 20%* when you enter code:

*This offer cannot be combined with other discounts or quotes. This offer is not valid for distributors or third parties. Offer only applies to products and pack sizes listed below.

Listing below represents pricing if the coupon code is applied. 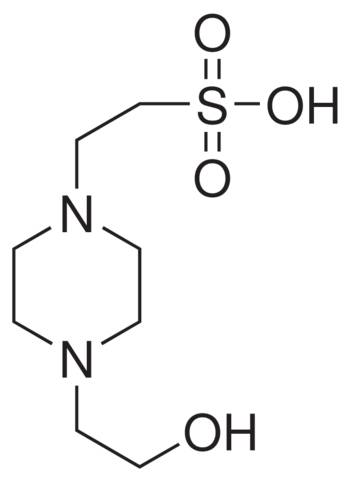 HEPES is a buffering agent used in biochemistry and molecular biology that was selected and described by Good et al. It is a zwitterionic, piperazinic buffer that is useful for a pH range of 6.8 – 8.2. HEPES lacks the ability to form a significant complex with most metal ions and is recommended for use as a non-coordinating buffer in solutions with metal ions.

HEPES is one of Good's Buffers and is used in biochemistry and molecular biology. HEPES lacks the ability to form a significant complex with most metal ions and is recommended for use as a non-coordinating buffer in solutions with metal ions. It is commonly used in cell culture media for various types of organisms and for protein studies that use it as a binding buffer and an eluent during cation exchange chromatography. HEPES is also used in DNA studies as a buffer solution to form precipitates of calcium phosphate and DNA and as a buffer in electroporation.

HEPES interferes with reactions between DNA and restriction enzymes to a lesser extent than similar buffers with less substituted amine groups, such as Tris. This lack of interference occurs because steric hindrance of the protonated tertiary amine in HEPES shields the negative charge of DNA to a lesser extent than less substituted buffers. It has been demonstrated that HEPES can be used to buffer mammalian cell cultures in closed systems of high and low density cultures, as well as open systems of high density culture and has shown usefulness as a buffer for in vitro fertilization and embryo culture. In combination with the traditional Tris buffer, HEPES has also been shown to provide lower background levels and and expanded dynamic range in quantitative real-time PCR (qPCR).