Parkinson’s disease is a neurodegenerative disorder, leading to tremors or trembling, stiffness, and many problems with movements (such as walking, balance, and coordination). Although not considered a deadly disease, people with Parkinson’s disease are at high risk of two major causes of death: pneumonia and falling.

In the U.S., Parkinson’s affects nearly 1 million people and more than 6 million people worldwide. Unfortunately, similar to other neurodegenerative disorders, there have been no disease-curing treatment options for Parkinson’s disease.

However, a new hope to finding an effective cure for this disease has risen, after a research team at University of California San Diego accidentally reprogrammed connective tissue cells (fibroblasts) into neurons by making a particular protein go away.

After this breakthrough, the team took a huge step forward and performed a study in mice to develop a unique approach to treat Parkinson’s disease—by generating new neurons in the damaged brain and rejuvenating the loss of neurons.

Numerous problems with movements in Parkinson’s disease result from neurodegeneration (when neurons stop working or die) in the brain, mainly from the loss of neurons.

Abnormal and toxic clumps of a misfolded alpha-synuclein protein develop inside neurons of patients with Parkinson’s disease, usually located at the tip of neurons or a synapse. These toxic clumps affect the release of dopamine between neurons, critical to control the start and stop of movements. Eventually, these clumps kill neurons.

Not only dopaminergic neurons, but patients with Parkinson’s also lose another type of neuron that produces norepinephrine. In a healthy brain, norepinephrine is responsible for supporting the proper release of dopamine and controlling many automatic functions of the body, such as heart rate and blood pressure.

Unfortunately, many current treatments are unable to treat patients with advance stages of this disease, particularly when most dopaminergic neurons are dead. Once lost, these neurons won’t recover or regenerate. Consequently, many patients at the later stages of this disease need their wheelchairs and entirely depend on their caregivers around-the-clock.

For patients with early stages of Parkinson’s disease, current treatments can help to control the symptoms, so they are comfortable to move around and able to perform their daily tasks.

To ease the symptoms and help with the movement problems, some approaches for treating patients with early stages of Parkinson’s disease are:

In addition to treating the symptoms, another possible approach to treat the patient’s brain is by targeting a pathological protein or a disease-causing protein by using antisense oligonucleotides. By doing so, this treatment will slow down or protect dopaminergic neurons from dying.

Another preclinical study in mice by Dr. Xiang-Dong Fu’s team at UC San Diego developed a completely different approach to cure Parkinson’s disease using antisense oligonucleotides. The goal for this approach is to replace the loss of dopaminergic neurons by repopulating functional neurons in the damaged brain.

In order to generate new neurons in the brain, researchers reprogrammed astrocytes to become functional neurons (Qian et al. 2020). Astrocytes are star-shape cells surrounding neurons that outnumber neurons by over fivefold. Unlike neurons, astrocytes are unable to fire electrical signals to communicate with each other.

Reprogramming astrocytes into neurons is only possible by reducing the levels of polypyrimidine tract-binding protein (PTB). PTB is a protein that binds RNA, important for turning genes on and off. This protein is also important in reprograming a cell into a functional neuron ( Xue et al. 2013). By forcing PTB to disappear, the cell receives a signal to turn on the genes to produce neurons. 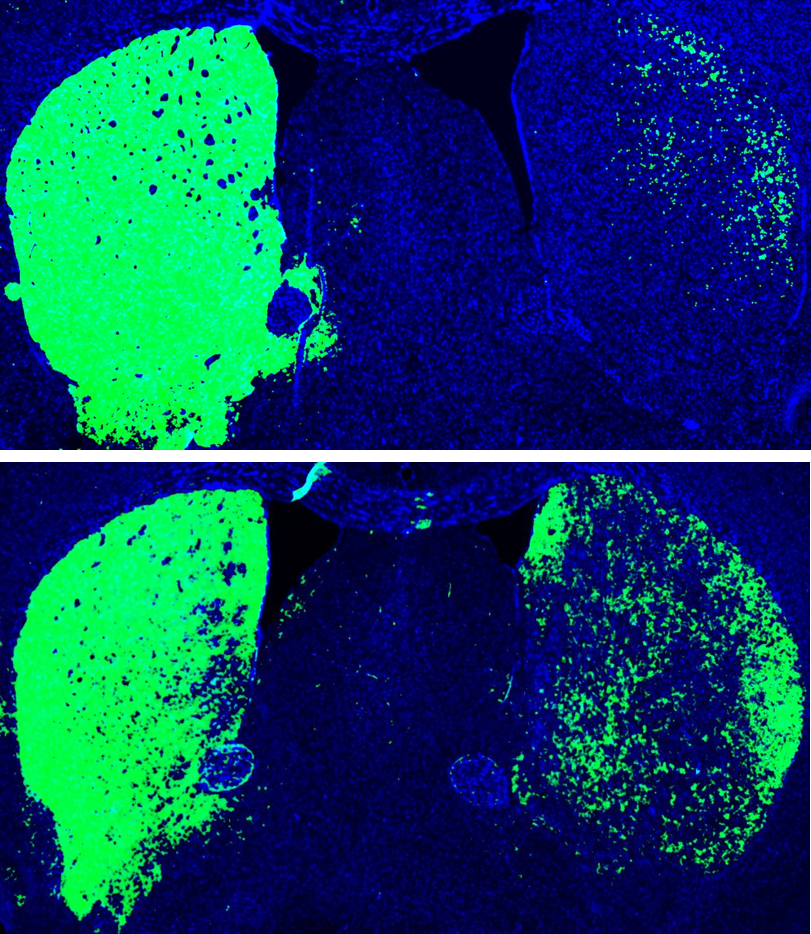 The team observed that a single antisense oligonucleotide treatment in those treated mice successfully reprogrammed a small number of astrocytes into functional neurons and restored a level of dopamine similar to that in normal mice.

Although this study using mice as a model is still preliminary, the idea of using antisense oligonucleotides to repopulate neurons in the brain could pave the way to find a better treatment for patients with Parkinson’s disease.

This new approach for treating Parkinson’s disease appears promising and it might help cure patients in advanced stages of this disease. What’s more exciting is this treatment could potentially be useful to treat patients with other neurodegenerative diseases, such as Alzheimer's and Huntington's diseases, by rejuvenating the loss of neurons.

One-time Treatment to Generate New Neurons and Cure Parkinson’s Disease in Mice
Parkinson’s disease is a neurodegenerative disorder, leading to tremors or trembling, stiffness, and...
Can Fatigue and Cytokines Be Markers of A Chronic Illness?
Fatigue is among the earliest and common symptoms of an illness. In fact, most patients complain abo...
Neurotrophins
It is a still a commonly held belief that nerve damage can never be healed or repaired sufficiently...
Overview: Types of PCR Probes
When performing a qPCR or RT-qPCR, a PCR probe is usually used to detect the target sequence using f...