The traveling salesman, 45 and otherwise healthy, had been hospitalized several times already. 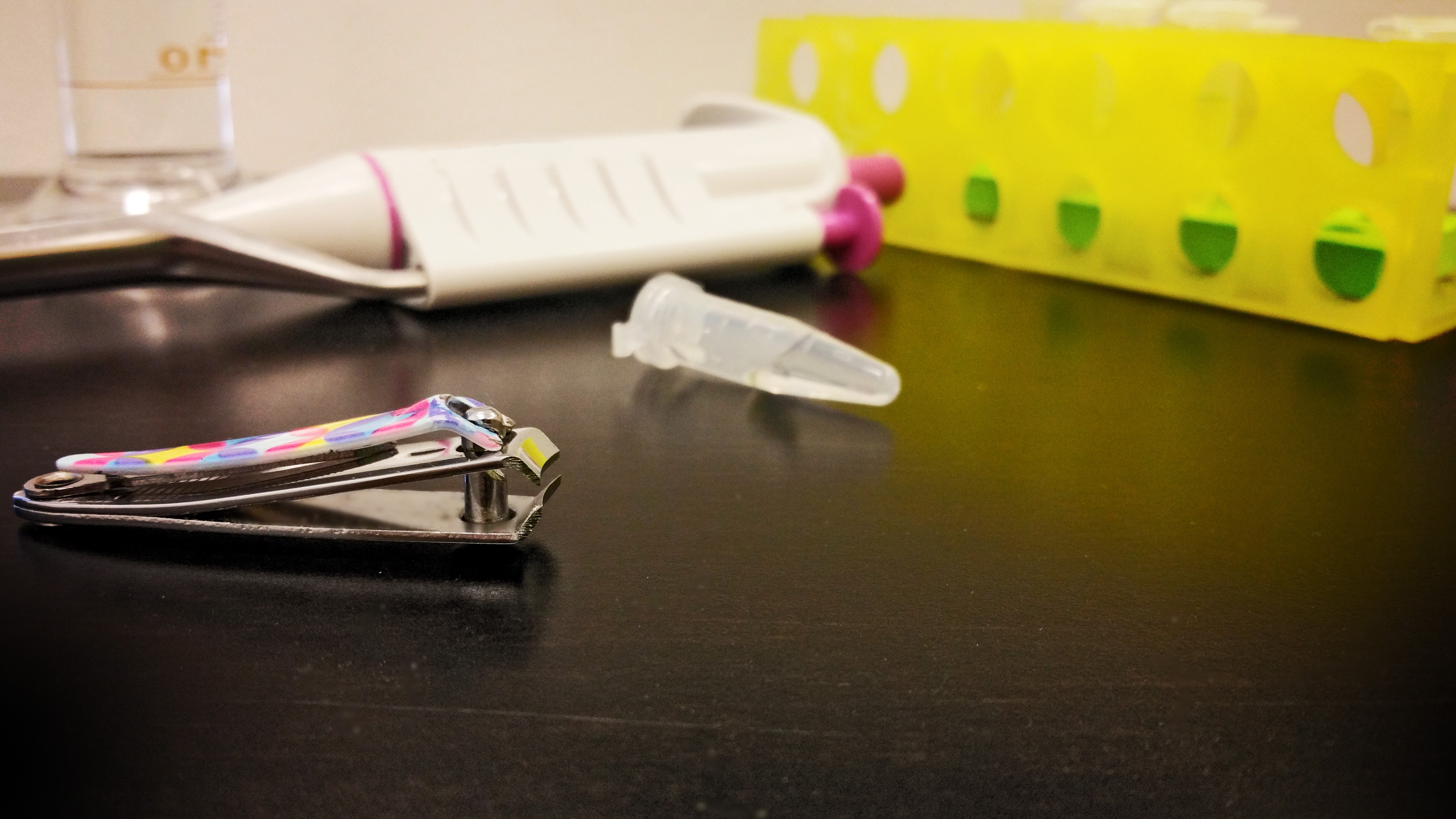 Based on a real homicide case.

The traveling salesman, 45 and otherwise healthy, had been hospitalized several times already. He complained of fatigue and weight loss, a condition that had persisted for half a year. Doctors hadn’t come to any diagnosis; they weren’t even sure if he had a disease, because no tests they’d conducted offered conclusive results. His main physician referred the salesman – we’ll call him Frank – to a pathologist, a doctor who often performs disease analysis in a forensic context. That pathologist, Dr. Daniel, asked for a sample from the patient that Frank’s physician may have thought unusual: fingernail clippings.

This story might be resemble the beginning of a medical or crime drama many of us are familiar with. However, much of the forensic science presented in crime shows is actually conducted in real labs. When a crime like robbery or murder is committed, scientists are consulted to help identify a perpetrator, and they often rely on DNA evidence from body fluids like blood. But if there is no biological evidence left behind by a criminal – as in the case of poisoning – forensics experts have alternate methods of discerning what substance may have been responsible.

This situation usually requires a toxicologist, an expert on chemical analysis and substance reactions, whose knowledge can identify what poisons are present in a body or tissue. The sources they collect may be blood or vitreous fluid from the eyes; they also sample nails or hair. Toxicological analysis can improve law enforcement’s chance of solving a crime if one exists, providing investigators with biochemical and DNA profiles. While Frank’s identity was known, his fingernail samples still carried supplementary evidence pivotal to diagnosing his mysterious ailment.

Dr. Daniel understood the forensic value inherit to this man’s nails and their cellular composition. As a medical professional, he knew the dynamics of tissue growth: cells rely on and grow in the matrix of the body, but they incorporate environmental chemicals and substances as well. These molecules accumulate in the cellular complex, and they can be stored in the body for years. Such chemicals can be detected much later through biochemical tests. Nails in particular have a slow rate of growth, offering retrospective insight to the past year’s growth depending on the individual and length of the nail. Substances can be detected, identified and quantified through techniques developed by forensic specialists.

Frank’s nail clippings were easily packaged and transferred for additional analysis; only a small portion would be necessary for the process. Though Dr. Daniel had already made a confident visual analysis on the nails, he wanted a second opinion, and the added confirmation would hold weight in a court system he was now certain the case was destined for. Ancillary tests had to be conducted by the toxicologist who next received Frank’s fingernail clippings along with the chain of custody, a document passed between investigators to conserve the legitimacy of evidence. The toxicologist signed the form and started planning the best tests for her examination of the nails.

Nails and hair have special advantages in the forensics laboratory. The process of collecting these samples is simple, noninvasive and negligible in the physical integrity of a victim or perpetrator. Both sources are also robust in their resistance to chemical change – the durability and slower decomposition rate of keratin preserves nails and hair, even at room temperature. There are specialized chemicals used to counteract these properties, and these would be employed by the toxicologist.

A study published in the Journal of Analytical Toxicology confirmed certain substances, incorporated into the keratin fibers themselves, can be detected in nails for 3–6 months. This study of over 10,000 samples also indicated nails provide a longer potential timeline of exposure than hair does, raising their value for the forensic scientist. The toxicologist had to consider the options of tests she would prioritize to develop her results and the most valuable conclusions. There were a few different theories she could make based on what tests she performed. Nails as a substrate can diagnose general or environmental pathologies, indicating health concerns like infectious disease or trace elements from chemical exposure.

Initial tests performed include enzyme-linked immunosorbent assay and liquid chromatography–tandem mass spectrometry (LC–MS-MS). Samples that test as presumptive positive then go through additional confirmatory tests. In preparation, they are washed, pulverized and chemically digested. This process is another familiar method to biochemical laboratories, employing many of the same techniques and materials. Depending on the extraction performed, tests can provide scientists with the sample’s DNA profile or a summary of incorporated chemical components.

The priority of this case, the extraction of unknown substances from biological samples, is an important duty of forensic specialists and medical examiners. Chemical extraction was performed by the toxicologist analyzing Frank’s nails. A similar process is used by forensic scientists conducting DNA identification using the extraction of exogenous DNA.

Protocol by the Office of the Chief Medical Examiner in New York City entails the processing of these samples, applied when nails contain DNA or chemical information to medicolegal cases. Their keratin composition is first degraded by a digestion buffer; organic extraction involves a digestion buffer of Tris (pH 7.5), EDTA, 0.1% SDS and proteinase K. The proteinase K is directly accountable for breaking down the tough keratin and thus freeing other molecules for inspection. Once the nails are digested, they’re incubated and centrifuged. Subsequently recovered substances (DNA, trace element, toxin or biochemical) are purified, concentrated and extracted for identification. Regardless of whether nail samples are processed individually or as a group, soaking clippings in digestion buffer results in the highest recovery rates of significant biomolecules.

Biochemical extraction is used in cases of assaults with direct contact between victim and assailant. DNA from the victim can be separated from that of the perpetrator for positive identification. It can also identify the person from whom the nail originated. One nail clipping constitutes a robust sample for DNA, and medical examiners have confirmed the sources can remain viable for upwards to twelve years after removal from live or deceased individuals. In a 2005 research project by medical examiners in Italy, nail samples from exhumed and skeletonized individuals (deceased within the last twelve years) were processed with another proteinase K, SDS and DTT buffer. The extracted DNA was then amplified with polymerase chain reaction to help produce a successful sequence. Their procedures yielded DNA sufficient to identify each individual when soft and bone tissue were inconclusive as compared sources, proving just one clipping can provide the identity of a person.

Just one clipping also – in Frank’s mystery illness – increased the toxicologist’s success rate for detecting other biochemical substances. She used the same technique a medical examiner might when isolating DNA, using a similar proteinase K buffer. Extraction was optimized by the forensic toxicologist to indicate and classify any toxins. This technique, usually used for drug detection, was recommended by Dr. Daniel to identify something more sinister: poisons.

The nails were analyzed for metals, including mercury, arsenic and lead; arsenic was detected in all samples. Dr. Daniel confirmed these findings with his own – multiple bands of transverse true leukonychia or “Mee’s lines.” These transverse white bands on the nails are a physiological presentation indicative of arsenic poisoning, and they were present on Frank’s nails upon Dr. Daniel’s initial visual analysis.

The diagnoses of both toxicologist and pathologist had an unpredicted result: Frank’s primary physician recalled a similar patient. Another traveling salesman, of the same age and sales territory, had also reported weakness and weight loss before dying of unexplained causes. The cases were too similar to ignore, and Dr. Daniel asked for a comparative study between the two salesmen. When the first individual was exhumed again, arsenic was also detected in his samples. Consequently, a criminal investigation was launched under suspicion of deliberate poisoning.

Similar cases of attempted and successful poisoning have occurred for centuries, with arsenic becoming less popular once detection tests were developed in the 1830s. They do, however, resurface occasionally, as in the 1995 murder attempted by St. Louis native Jim Boley against his wife, a case that garnered national coverage. More recently, a Chesterfield, Mo. case of domestic homicide involved mineral water laced with arsenic – refer to the baffling 2004 death of John Mullen. This later crime was months in the casebook before arsenic was identified. The forensic technique is more refined in today’s laboratories, with regulated procedures and quantities of reagents like the instrumental keratin-cutter, proteinase K.

Outside the lab, investigators discovered both salesmen (now regarded as victims of poisoning) regularly ate at the same department store lunch counter while they traveled. They were also consistently served by the same waitress. Based on the average daily growth rate of nails (0.1-0.15 mm), law enforcement approximated the dates during which the salesmen had consumed arsenic. The Mee’s lines of the undigested nail samples were measured, and an estimate of distance between incidents was made to prove multiple arsenic-related events. Based on the quantity of Mee’s lines formed, Frank’s exposure was substantial, perhaps over half a dozen meals laced with the poison. They aligned with logs from his traveling schedules; the Mee’s lines from both men corresponded to dates when they’d dined at the lunch counter. Investigators had new reason to pursue this waitress as a suspect.

In the interim of their analysis, Frank died of health complications directly associated to the arsenic poisoning. The case had once again ascended in criminal court, now to murder. With the laboratory’s instrumental results and testimony from Dr. Daniel, the waitress was arrested and convicted of murder. The conviction of the salesmen’s murderer prevented any more unknowing victims from dining on what would be their last meal. It also reassured the forensic community that nails are essential sources of evidence for such cases.

All this pseudo-noir drama and real-life crime, resolved with the help of a buffer that has been a useful tool in biochemical research.

Buffers Through Time: How Buffers Progress Alongside Research
Buffers are a class of solution-stabilizing molecules which existed long before contemporary lab t...
Ancient Family Reunion: PCR Reunites Humans to Ancestors
America’s inhabitation by humans is a discussion among archaeologists with new, compelling and con...
Death of a Salesman – How Proteinase K Unlocked the Secret in a Criminal Case
The traveling salesman, 45 and otherwise healthy, had been hospitalized several times already....
How to choose the right Agrobacterium vector for plant transformation
One of the key factors influencing an Agrobacterium-mediated gene transformation is the vector sel...