All about Probe-Based Real-Time qPCR Assays

In molecular biology, the real-time quantitative PCR (qPCR) method is a favorite research tool for many scientists. This method is relatively easy to prepare, fast, accurate, and sensitive enough to amplify even one single copy of a particular sequence. Real-time qPCR method is also useful if you have many samples in your experiment and you need to quantify, compare, and analyze those samples.

To prepare a qPCR reaction, you will need:

How Does a Fluorescent Signal Work in Real-Time qPCR?

Real-Time qPCR requires a fluorescence reporter in the reaction. The signal given by the fluorescent reporter molecule is directly proportional to the number of PCR products produced.

There are four stages of qPCR, and during those four stages, the level of fluorescent signal may change.

The Four Stages of qPCR

There are many types of fluorescent reporter molecules, such as a fluorescent dye, a labeled oligonucleotide primer, and a probe (such as TaqMan® Probe).

A fluorescent dye (such as SYBR Green®) binds to double-stranded oligonucleotides non-specifically. When this dye binds to DNA, their fluorescent signal increases 20-100 fold. The disadvantage of this assay is the dye can bind to non-target DNA, such as primer dimers or concatamer. A concatamer is a long DNA molecule consisting of repeated sequences.

This method uses one labeled PCR primer, whereas the other primer is unlabeled. As an example, a primer has a fluorescent label next to one or more adjacent cytosine residues at the 5’-end. During PCR, the labeled primer is annealed and extended. It then becomes a part of the template. During this amplification, guanosine residues act as a quencher and decreases the fluorescent signal. A quencher is a molecule that absorbs and suppresses fluorescent signal.

A probe is synthesized based on a specific sequence on the DNA template. Therefore, labeled primers or probes only binds to target regions of the DNA. The probe based qPCR assay is more sensitive and specific than the qPCR assay using a fluorescent dye.

What is a Taqman® probe?

Probe-based qPCR relies on Taq DNA polymerase 5’-->3’ exonuclease activity and a probe. A probe is a sequence specific oligonucleotide with a reporter dye and a quencher. The chemical reaction behind its mechanism is hydrolysis of a probe (cleavage of the reporter from the quencher), causing the emission of a fluorescent signal. Sometimes, we use the terminology of ‘TaqMan®’ for this type of probe.

- A dual-labeled probe consists of:

How Does a Probe-Based qPCR Work?

During DNA amplification, the probe binds to the template and Taq DNA Polymerase with its 5’-->3’ exonuclease activity cleaves the probe.

A single nucleotide polymorphism (SNP) is a site containing a small genetic variation, such as a single base substitution, in the DNA sequence. SNPs may play an important role in the genetic basis of an allele or a disease because their location is usually near or within a gene associated with the allele or the disease. 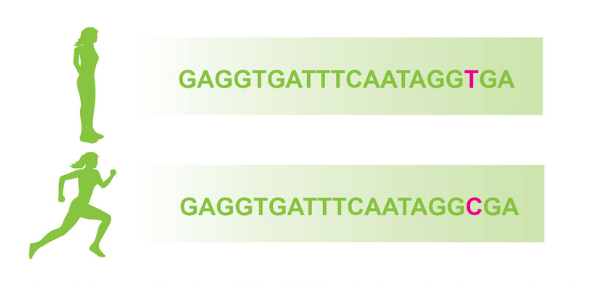 Conceptual illustration of SNP rs1815739, related to muscle performance. The T allele (top) codes for a stop codon, while the C allele (bottom) codes for an arginine. The study for the ACTN3 (rs1815739) polymorphism showed that carriers of the T allele compared to carriers of the C allele were significantly weaker in muscle performance. In addition, the study indicated athletes having the homozygote TT genotype compared to homozygote CC allele were less likely to become a power athlete.

One approach to study the function of SNPs is by comparing the SNP patterns of a group affected by the disease and a group without the disease and by measuring the genetic variations of SNPs between those two groups (or genotyping).Probe-based qPCR is a powerful tool for a genotyping study involving a small number of SNPs in a large population. This assay is accurate, high-throughput, time-efficient, and relatively cheap.

During amplification, the probe binds to the target and the DNA Polymerase with a 5-->3 exonuclease activity cleaves the reporter dye from a probe emitting fluorescence. 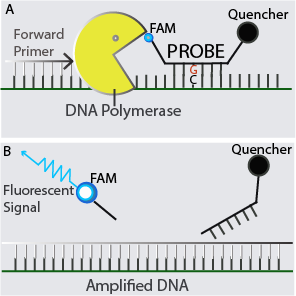 The binding of the probe to the target is unstable when there is a single base variation. There is no emission of light, because the probe is intact. 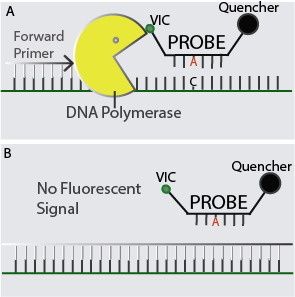 DNA methylation is the addition of a methyl group to DNA. Methylated DNA at cytosine bases of eukaryotic DNA turns off the gene transcription and sometimes it causes a gene silencing.

In mammals, DNA methylation occurs at the fifth atom position of cytosine in CG dinucleotide repeated sequences (or CpG islands).

DNA methylation plays an important role in biological processes and diseases, such as cancer and neurodegenerative disorders. Probe-based qPCR is useful in finding DNA methylation status in specific regions. This technology uses two primers, a reference gene for normalization, and a dual labeled Taqman® probe to bind the specific methylated allele.

The first step in this method requires the treatment of DNA template with sodium bisulfite to convert the unmethylated cytosine bases to uracil bases.

Taqman® probe only detects the target with the methylated cytosine during amplification.

Primers and probes can’t bind to unmethylated cytosine bases that are converted into uracil bases, thus there is no fluorescence signal.

MicroRNAs (miRNAs) are small, 18-28 nucleotide-long, noncoding RNA molecules. These small RNA molecules bind to mRNA to regulate protein expression. These molecules are important in cellular functions, including cell proliferation and cell death. Using probe-based qPCR offers many advantages over other methods to detect miRNA. This method is useful to quantify miRNA and detect only mature miRNA. Quantifying miRNA in different tissues and different physiological or pathological conditions is an important step to study its functions. 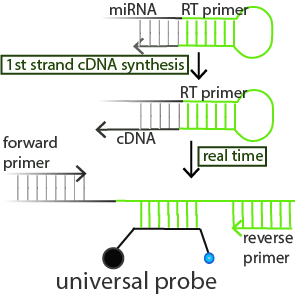 After RNA extraction from samples, reverse transcription is performed to synthesize the first strand of cDNA. The first- and second-strand cDNA synthesis uses a specific 3’ stem-loop primer (RT primer) and linear 5’ primer. The use of the 3’ stem-loop primer traps and anneals to 3’ end of mature miRNA. Then, the probe binds to the sequence of the stem-loop primer.

Real Time qPCR has many advantages over other methods to quantify gene expression. It detects as little as a single copy of transcript. It is more sensitive than the RNAse protection assay and dot blot hybridization. Due to its sensitivity, this method helps detect tiny differences in gene expression between samples and mRNA from homologous sequences.

After extraction from samples, RNA is converted into cDNA using a reverse transcriptase enzyme. The cDNA template is then aliquoted into each well with master mix containing Taq DNA Polymerase with a 5-->3 exonuclease activity, gene-specific primers, Taqman® probe, and buffer.

SARS-CoV-2 is a single-stranded RNA virus. Its genome consists of several typical coronavirus genes, including spike (S), envelope (E), membrane (M), and nucleocapsid (N). At the end of 2019 and into 2020, this virus caused pneumonia outbreaks worldwide, called COVID-19 disease.

To help researchers and public health interventions during disease outbreaks, viral detection has to be reliable. Typically, real-time qPCR diagnostic assay is useful to detect causative viruses of a disease.

The detection assay starts with collection of samples from the upper and lower respiratory regions of the patient. RNA samples are then extracted and converted into cDNA. To detect SARS-CoV-2, different public health organization use different genes to design primer and probe sets. As an example, Centers for Disease Control and Prevention (CDC) uses N1, N2, N3, and RNAse P genes as targets and Taqman® probe-based Real-Time qPCR.

All about Probe-Based Real-Time qPCR Assays
In molecular biology, the real-time quantitative PCR (qPCR) method is a favorite research tool for m...
Overview: Types of PCR Probes
When performing a qPCR or RT-qPCR, a PCR probe is usually used to detect the target sequence using f...
How to choose a PCR Probe
PCR probes are DNA or RNA sequences labeled with a reporter molecule. The reporter is a molecule tha...
All About Fluorometric Detection Assays
Fluorometry is the technique of measuring any parameter using fluorescent emission. In the context o...