In vitro plant regeneration is the process of growing plants using tissue culture techniques. Plant regeneration can be achieved by culturing explants to form organs (organogenesis), or by developing plant embryos (somatic embryogenesis). Both techniques can lead to regenerating entire plants.

This article summarizes most of the important aspects of plant regeneration using somatic embryogenesis and organogenesis. In this article, you will find information about the differences, types, advantages, and disadvantages between somatic embryogenesis and organogenesis. I also describe the factors influencing each process and some biotech applications for both techniques.

What is Organogenesis and Somatic Embryogenesis?

In plant tissue culture, organogenesis is the formation of organs from the cultured explants (plant material such as roots, leaves and flowers).The organogenesis process is where the plant organs, either shoots or roots, are developed.

Embryogenesis is the process of forming and developing embryos (Bhatia and Bera, 2015). Plant embryos are the area of the seed where the plant’s roots, stem and leaves start their earliest formation.

The in vitro and in vivo plant embryogenic processes are very different from each other. In nature, a mother plant is crossed with a parent plant to produce a seed; this is sexual hybridization.

In tissue culture, sexual hybridation does not occur. Instead bipolar structures that are embryo-like can regenerate from somatic cells (any plant cell other than a gamete or germ cell) (Arnold et al., 2002). Because of the embryo origin in tissue culture, this process is named somatic embryogenesis (SE).

Types of Organogenesis and somatic embryogenesis

The process in which plant organs are derived from a calli mass (tissue formation occurring on a plant wound or at the site of a cut) in the explant is termed indirect organogenesis.

Indirect organogenesis has been used to produce transgenic plants in two ways: 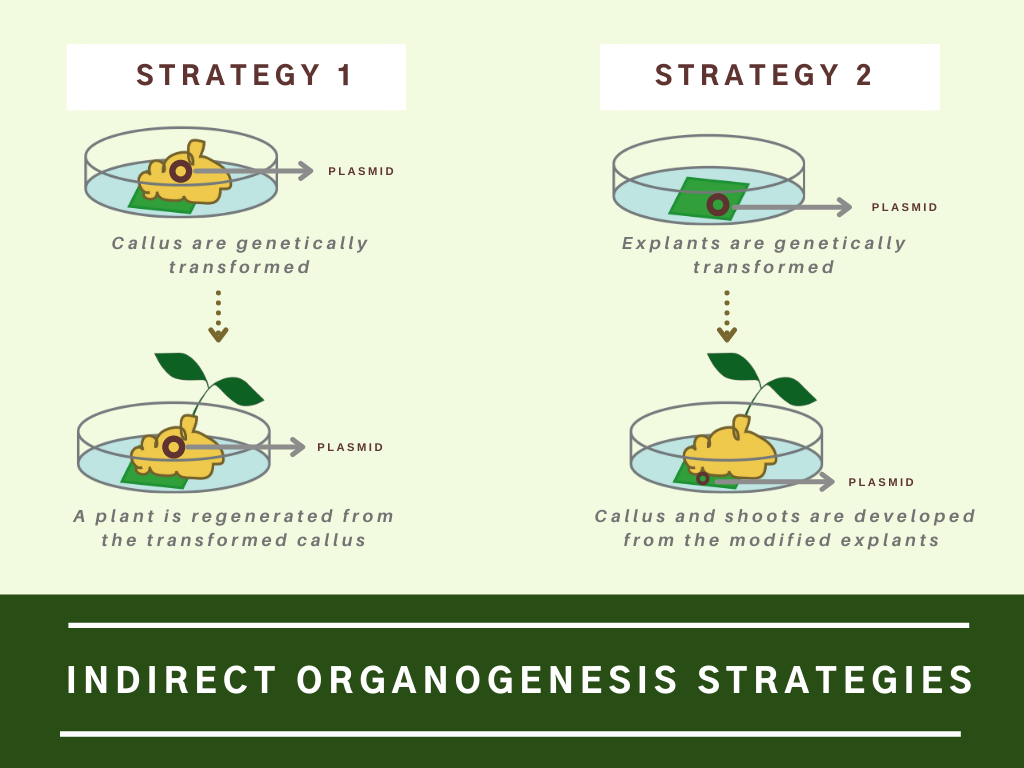 The production of direct buds or shoots from tissue with no intervening callus stage is called direct organogenesis.

Direct organogenesis has been used to propagate plants with improved multiplication rates (high number of plant per explant) thus reducing operational costs. It has also been used to produce more transgenic plants. And, most importantly, it has been used for clonal propagation (genetic multiplication of a cultivar without sexual reproduction) since it ensures the production of uniform planting material without genetic variation.

Indirect somatic embryogenesis is a process where a callus is first produced from the explant, and then embryos are formed from the callus tissue or a cell suspension culture. This technique is commonly used in transgenic experiments. 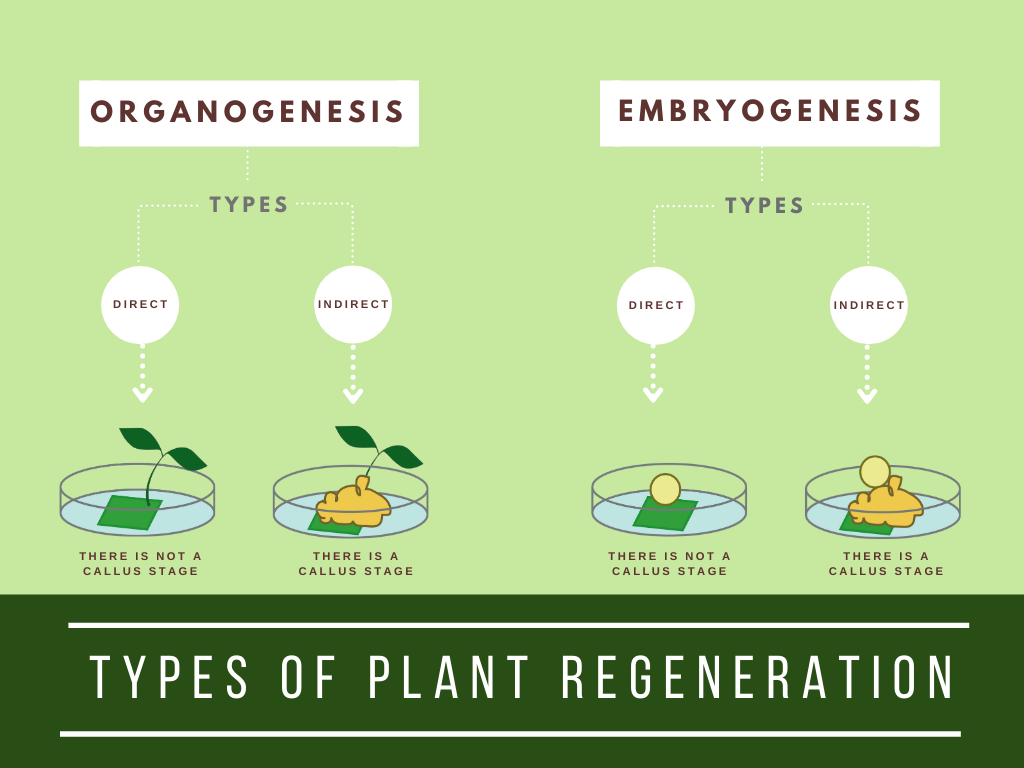 Phases of organogenesis and somatic embryogenesis

Organogenesis can be split into three phases:

SE can be split into four phases: 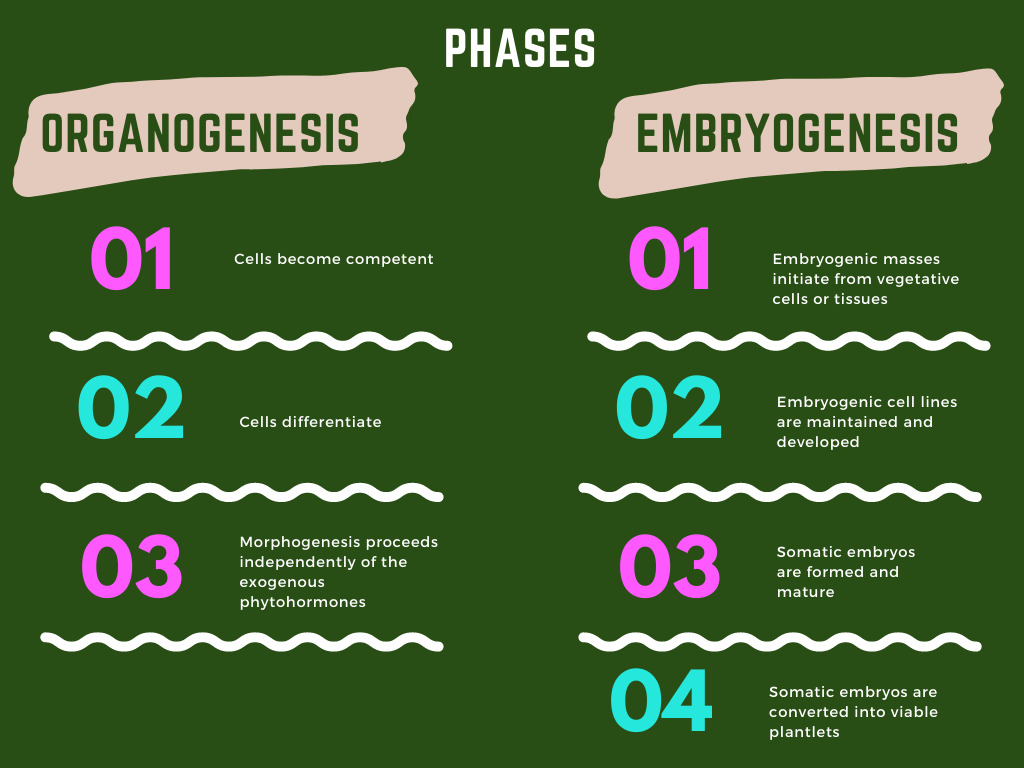 Advantages and disadvantages of organogenesis and somatic embryogenesis

The type of explant and the age of the explant can have an impact on the success of somatic embryogenesis.

Another challenge encountered is that, even when you’re choosing different explant tissue (root, flower, shoots, etc.) from the same mother plant, the embryogenic calli are produced at different frequencies.

Here it is necessary to test different concentrations of growth regulators for the induction of somatic embryos.

Furthermore, explants coming from different cultivars of the same species can present varied responses to SE induction. Again, the evaluation of cultivar-specific explants in similar culture conditions is required to determine those with positive responsiveness to somatic embryo production.

If you supplement your media with auxins, it can help promote callus proliferation and inhibit differentiation.

And if you remove or decrease auxins, this will help the development of somatic embryos. Auxins are also responsible for establishing cell polarity in the embryo (apical and basal axis).

Something else we want to point out is that, although cytokinins are also suitable candidates for induction of somatic embryogenesis, fewer cytokinins are used to stimulate SE.

In general, it has been suggested that the cytokinin thidiazuron-TDZ is more effective than other cytokinins for somatic embryogenesis.

Amino acids like glutamine, proline, tryptophan, polyamines (putrescine, spermidine), and brassinosteroids (e.g., 24-epibrassinolid) have been reported to enhance somatic embryogenesis in some species.

The potential of these compounds has been attributed to their diverse role in cellular processes such as precursor molecules for certain growth regulators and induce embryogenic pathways through cell reprogramming processes.

Light condition is a critical aspect when working with SE. For instance, white light enhances growth but at the same time increases the production of phenolic compounds and abscisic acid levels. These substances induce oxidative reactions generating browning of the tissues.

One way to mitigate these light-derived effects is by using activated charcoal in the medium. For other plant cultures like larches, darkness has proved to be as efficient for SE as with light (Lelu-Walter and Paques, 2009). Under this scenario, light conditions should be tested for SE, mainly for the maturation stage.

Maturation is regarded as a crucial stage of embryogenesis. Maturation is a preliminary stage for embryo development, which is essentially required for effective germination.

One critical factor in embryo maturation is water loss. Most of the tissue culture treatments promoting the maturation of the embryo use osmoticums (osmotic stress inducers) like sugars.

For instance, apart from being an energy resource, sucrose reduces the water potential of the culture medium, which ultimately leads to water stress, thereby promoting embryo development during in vitro culture.

In this sense, desiccation treatments (by drying the embryos in a filter paper) are also intended to favor embryo maturation. 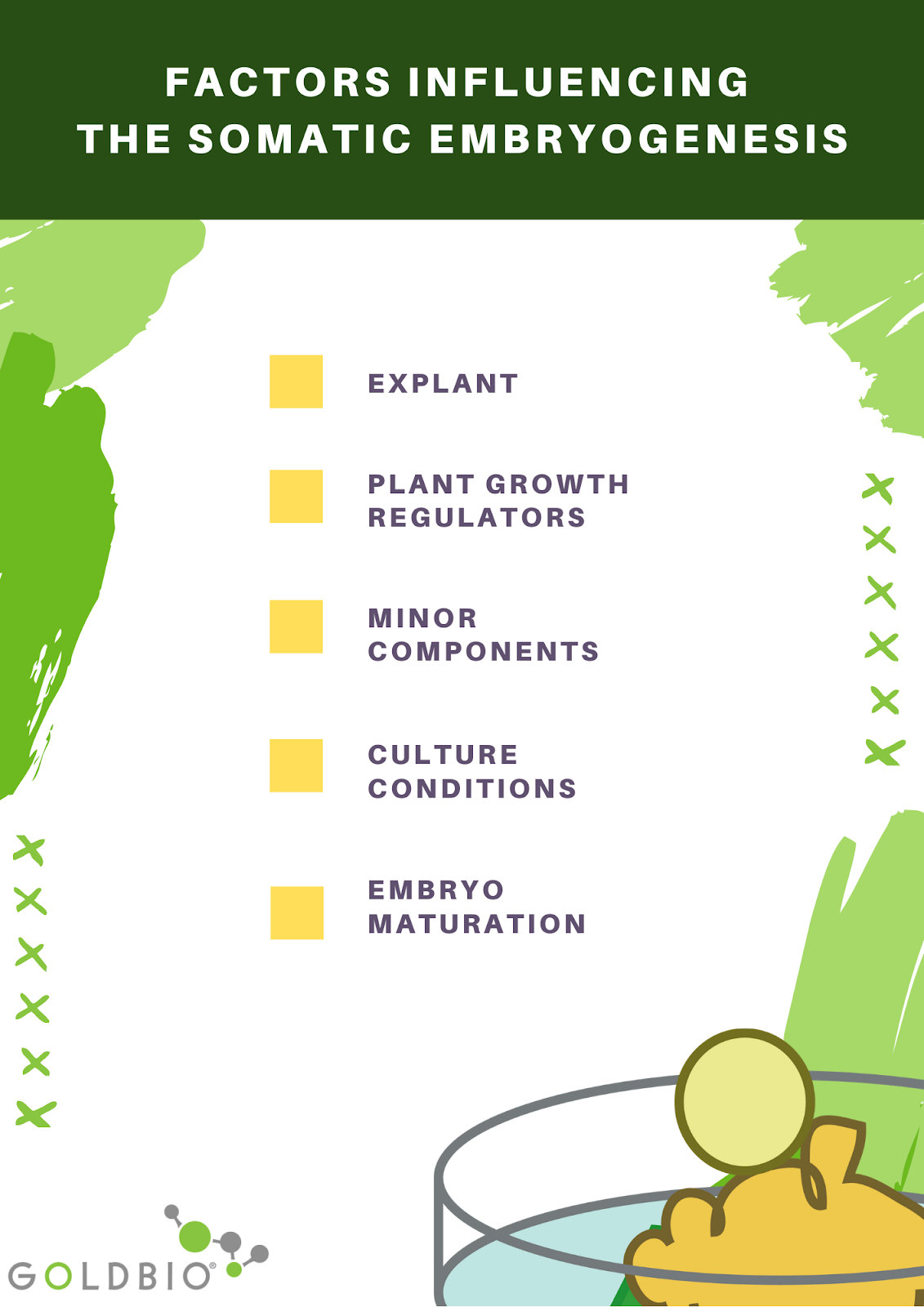 Factors influencing the in vitro organogenesis

There are three primary factors influencing in vitro organogenesis. Among these factors, organogenesis depends mainly on the balance of auxins and cytokinins and the tissue's ability to respond to phytohormones during specific culture conditions.

The kind of plant growth regulators (PGRs) and the amount used for plant regeneration varies considerably. In general, a combination of auxin and cytokinin is necessary for successful regeneration.

In recent years, the potent cytokinin TDZ has been commonly used as a unique PGR in the medium favoring the shoot regeneration.

TDZ, a substituted phenyl urea (N-phenyl-1, 2, 3-thidiazol-5-ylurea), exhibits strong cytokinin-like activity and has been shown to be an efficacious regulator of in vitro morphogenesis of many dicot plant species (Ahmed et al. 2012).

Light is essential in influencing organogenesis, mainly for shoot regeneration. In exceptional cases, darkness favors in vitro organogenesis, as is the case of strawberry shoots (Husaini et al., 2011). 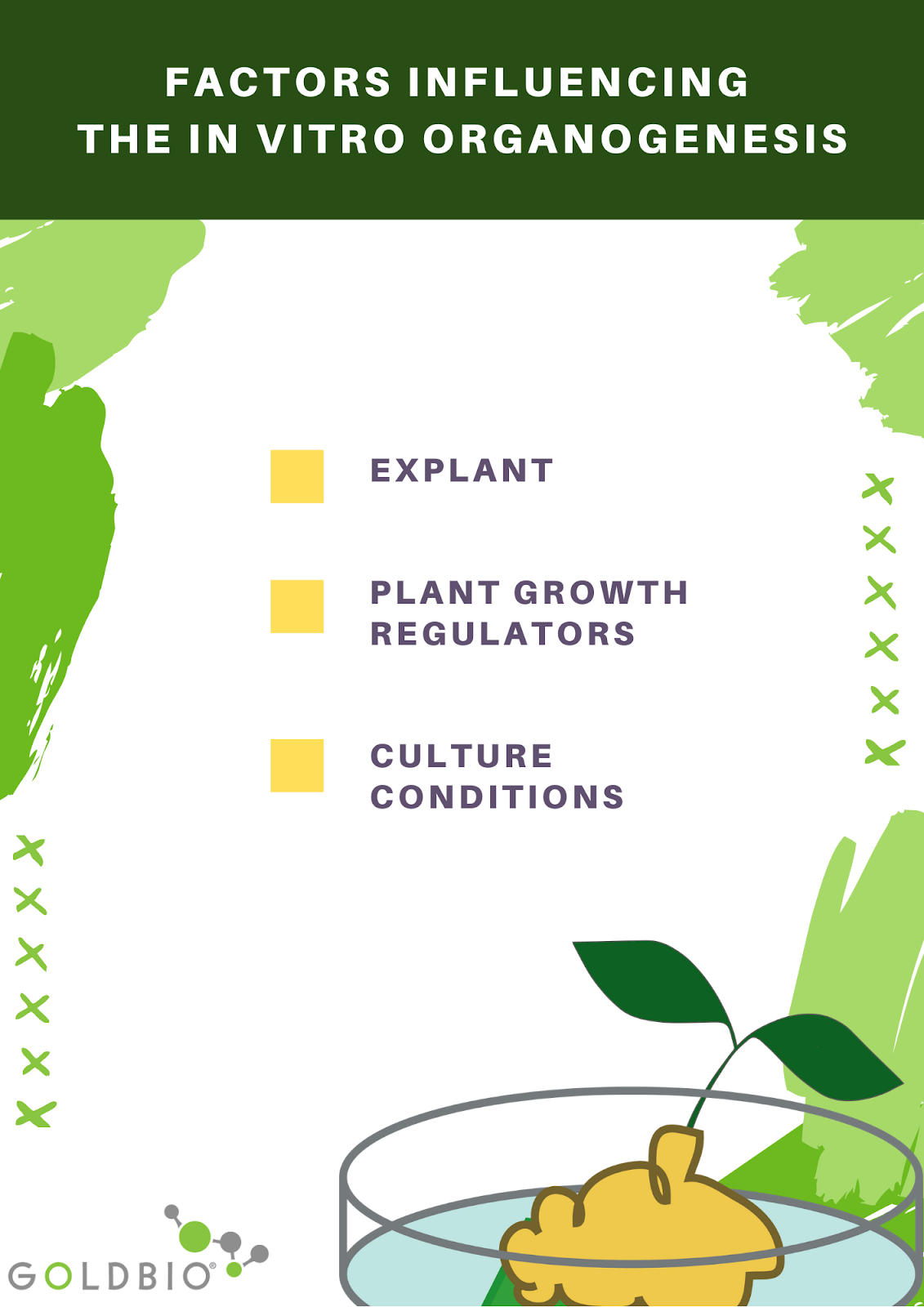 SE has been used in applications such as:

At GoldBio, we help you achieve your plant regeneration goals!

Visit us at https://www.goldbio.com/collection/shop-by-category and shop our catalog.

What Are Plant Growth Regulators - A Detailed Introduction to PGRs
Plant growth regulators are important compounds that impact aspects of plant growth such as root, sh...
The 4 Key factors influencing the in vitro plant regeneration
As a long-term plant scientist, I have discovered four important factors that influence in vitro p...
Four Steps to Design an Effective Medium for Plant Regeneration
When considering a medium for plant regeneration, there are a lot of considerations for optimizing a...