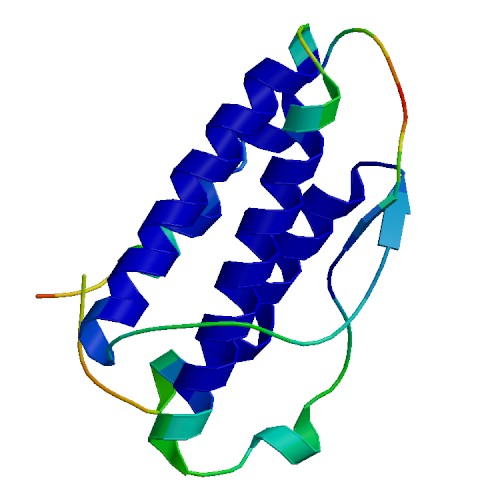 Thrombopoietin (THPO), the ligand for the receptor encoded by the c-Mpl proto-oncogene, is a key regulator of megakaryocytopoiesis and thrombopoiesis in vitro and in vivo. The cDNAs for THPO have recently been cloned from canine, murine and human sources. The proteins from these three species are highly conserved, exhibiting from 69-75% sequence identity at the amino acid level. Two distinct domains, separated by a pair of arginine residues that may be a proteolytic cleavage site, have been identified in THPO: the amino terminal region exhibiting sequence homology to erythropoietin and the carboxy terminal region containing multiple potential N-linked glycosylation sites. Recombinant THPO has been shown to stimulate the maturation, as well as the proliferation, of megakaryocytes and may have important therapeutic applications for the treatment of various clinical conditions associated with thrombocytopenia.

Purity:>95% by SDS-PAGE and HPLC analyses.

Biological Activity: Fully biologically active when compared to standard. The ED50 as determined by a cell proliferation assay using human MO7e cells is less than 1.0 ng/ml, corresponding to a specific activity of >1.0×106 IU/mg.