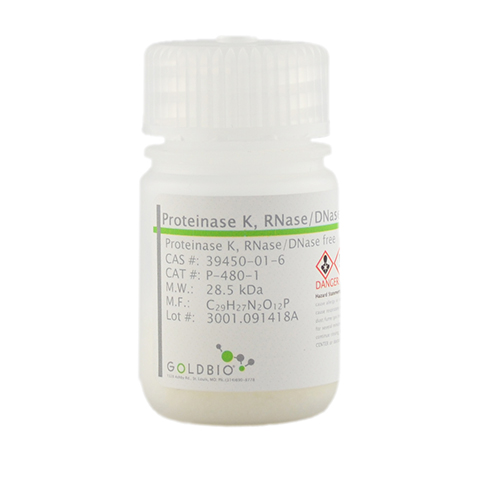 Proteinase K is a highly reactive nonspecific serine protease that belongs to the subtilisin family of proteins. It cleaves at the carboxylic acid side of aliphatic, aromatic, or hydrophobic amino acids. Proteinase K is capable of inactivating RNases and DNases and is used in the isolation or preparation of high molecular weight nucleic acids. Proteinase K is also useful for helping to characterize enzymes, due to its cleavage specificity. This enzyme was designated proteinase K because of its ability to hydrolyze keratin. Proteinase K is stable in a wide variety of detergents and buffer salts and at various temperatures and pH. The isoelectric point of proteinase K is 8.9.

GoldBio's Proteinase K undergoes two sterile filtration steps during the separation and purification processes. The final product is further analyzed by plate culture to ensure the removal of all living organisms was 100% effective.

Unit Definition: One unit is defined as the amount of enzyme that will liberate 1.0 μmol tyrosine (Folin-positive amino acid) from casein per minute at 37°C, pH 7.5.

How do you inactivate proteinase K?

What is the best temperature for proteinase K activation?

What is proteinase K used for?

How do you store proteinase K?

Aliquot proteinase K stock solution and store at -20 ˚C for up to 1 year.

Store lyophilized proteinase K powder desiccated at -20 ˚C for up to 2 years.

How do you dissolve proteinase K?

Proteinase K is water soluble and it can also be dissolved in Tris or PBS. Dissolving proteinase K with PBS is a little challenging, which may be due to pH. It's best to add proteinase K a little bit at a time while mixing into solution.

What is the optimal pH when working with proteinase K?

The optimal pH when working with proteinase K is between 7.5 - 12.0

Your free, printable guide to proteinase K, with general info, usage details and how to activate and optimize.

This handbook is packed with information about proteinase K, its applications, protocols, troubleshooting, FAQs and more. If you're working with proteinase K, you don't want to not have this handbook. 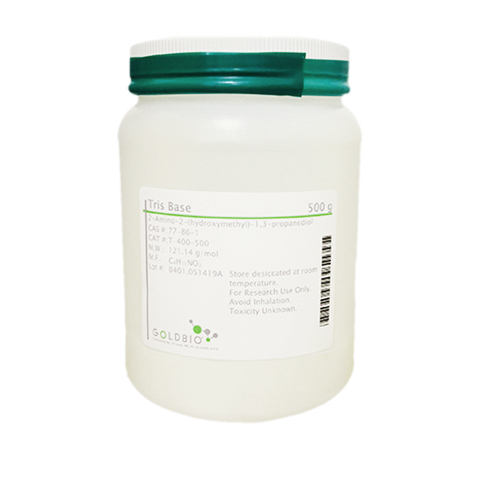 The Ultimate Guide to Proteinase K Activity & Concentration (u/ml)
From time to time, we have received questions about whether knowing proteinase K activity (u/ml) w...
20 Answers to Important Proteinase K Questions – Plus Free Printable Fact Sheet
A lot of questions pop up when it comes to using proteinase K, such as how to inactivate proteinase...
Death of a Salesman – How Proteinase K Unlocked the Secret in a Criminal Case
The traveling salesman, 45 and otherwise healthy, had been hospitalized several times already....