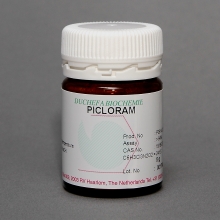 Picloram is a synthetic auxin that is often used in the control of woody plants and broadleaf plants. Auxins typically act in concert with, or in opposition to, other plant hormones. For example, the ratio of auxin to cytokinin in certain plant tissues determines initiation of root versus shoot buds.

The plant hormones cytokinins (CKs) comprise a class of growth regulators involved in the stress response, senescence, photosynthesis, nutrient assimilation and mobilization, as well as modulation of a plant tissue’s ability to act as a sink or source of metabolites.

CKs are recognized by a subset of sensor histidine kinases (HKs) and the signal is transmitted to the nucleus via a multistep phosphorelay (MSP), thus activating the expression of target genes.

A brief overview of these molecules.

This is an excellent review of the work that is being done towards a comprehensive understanding of Cytokinin signaling networks by Hwang, Sheen and Müller (2012).