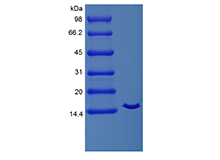 IL2 is a powerful immunoregulatory lymphokine produced by T-cells in response to antigenic or mitogenic stimulation. It is expressed by CD4+ and CD8+ T-cells, γδ T-cells, B-cells, dendritic cells, and eosinophils. The receptor for IL2 consists of three subunits that are present on the cell surface in varying preformed complexes. The 55 kDa IL2 Rα is specific for IL2 and binds with low affinity. The 75 kDa IL2 Rβ, which is also a component of the IL15 receptor, binds IL2 with intermediate affinity. The 64 kDa common gamma chain γc/IL2 Rγ, which is shared with the receptors for IL4, IL7, IL9, IL15 and IL21, does not interact independently with IL2. Upon ligand binding, signal transduction is performed by both IL2 Rβ and γc. It drives resting T-cells to proliferate and induces IL2 and IL2 Rα synthesis. It contributes to T-cell homeostasis by promoting the Fas-induced death of naive CD4+ T-cells but not activated CD4+ memory lymphocytes. IL2 plays a central role in the expansion and maintenance of regulatory T-cells, although it inhibits the development of Th17 polarized cells. This recombinant IL2 has been modified by substituting a serine for cysteine at position 141 of the original sequence.

Biological Activity: Fully biologically active when compared to standard. The ED50 as determined by a cell proliferation assay using murine CTLL-2 cells is less than 1.0 μg/ml, corresponding to a specific activity of >1000 IU/mg.