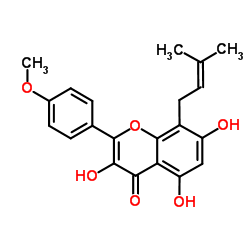 Icaritin is a prenylflavonoid derivative of icariin (Goldbio # I-215) and has been used for oncology research, to influence bone formation and displays neuroprotective effects. Applications in oncology and neurology research have been related to the activity of icaritin on estrogen receptors.

Within the field of cancer research, icaritin has been shown to act as an agonist and antagonist on estrogen receptors in vivo which was based upon concentration in different cancer lines. Icaritin was shown in vitro to sustain extracellular signal–regulated kinase (ERK) activity through stimulating estrogen receptors. Prolonged ERK activation arrested the cell cycle in the G2 stage and subsequently triggered apoptosis. Anti-cancer activity of icaritin has also been observed to occur in estrogen receptor negative cancer cells, showing an estrogen receptor independent pathway.

For Alzheimer’s research, icaritin has been investigated for attenuating cytotoxic effects caused by β-Amyloid proteins. While the mechanism for neuroprotection has not been elucidated, icaritin was shown to possibly exert these effects through mitogen-protein kinase (MAPK)/ERK cell signaling pathways.

NOT FOR HUMAN CONSUMPTION! 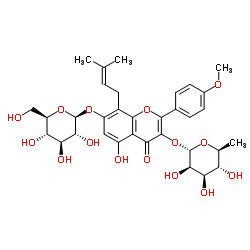