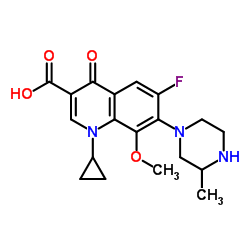 Gatifloxacin is a fourth generation fluoroquinolone antibiotic with a significant degree of activity towards gram-negative bacteria and enhanced activity toward gram-positive bacteria. It is also potent in vivo against Staphylococcus aureus, Clostridium and many other anaerobic bacteria. Gatifloxacin has also exhibited strong bactericidal efficiency in penicillin resistant and sensitive Streptococcus pneumoniae and S. aureus.