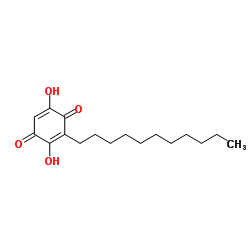 Embelin is a benzoquinone derivative found in Ardisia japonica which is a plant native to eastern Asia. It is used as an anti-cancer compound as well as an anti-inflammatory. Embelin has also been exhibited anthelminthic properties against cestode parasites.