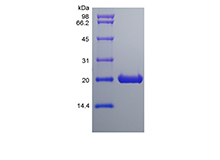 Ciliary neurotrophic factor (CNTF) is a polypeptide hormone whose actions appear to be restricted to the nervous system where it promotes neurotransmitter synthesis and neurite outgrowth in certain neuronal populations. It was initially identified as a trophic factor for embryonic chick ciliary parasympathetic neurons in culture. The protein is also a potent survival factor for neurons and oligodendrocytes and may be relevant in reducing tissue destruction during inflammatory attacks. In addition, CNTF is useful for treatment of motor neuron disease and it could reduce food intake without causing hunger or stress. CNTF is structurally related to IL6, IL11, LIF, and OSM. All of these four helix bundle cytokines share gp130 as a signal-transducing subunit in their receptor complexes.

Biological Activity: Fully biologically active when compared to standard. The ED50 as determined by a cell proliferation assay using human TF-1 cells is less than 30 ng/ml, corresponding to a specific activity of > 3.3 × 104 IU/mg.

Neurotrophins
It is a still a commonly held belief that nerve damage can never be healed or repaired sufficiently...