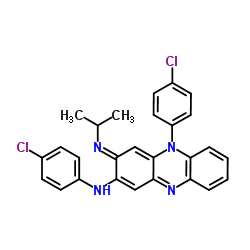 Clofazimine is an active phenazine composed of an imino group and aromatic tricyclic heterocycles that is used as an antimycobacterial, anti-inflammatory and anti-cancer compound. It has been shown to be a potent in vivo antimycobacterial agent toward Mycobacterium leprae and in vitro to Mycobacterium avium.

Clofazimine has been studied thoroughly, but its exact mechanism of action has not been elucidated. It has been shown to preferentially bind mycobacterial DNA, preventing bacterial replication and proliferation. Clofazimine has also been proposed to stimulate phospholipase A2 activity, which inhibits potassium transport. Other studies have found data that suggests clofazimine disrupts bacterial membranes, similar to cationic peptides.