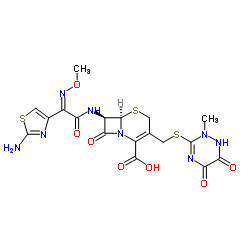 Ceftriaxone free acid is a β-lactam cephalosporin compound known for its potent antibiotic activity against gram negative and gram positive bacteria. It also has been observed to cross the blood brain barrier and has been used for both antibiotic and investigative purposes for the central nervous system (CNS).

Ceftriaxone has also been used in vivo for suppressing addictive behavior in rats. Researchers had shown ceftriaxone to upregulate glutamate transporter 1 (GLT1) expression, which diminishes glutamate concentration in synaptic clefts of the CNS. Ceftriaxone has been shown to effectively decrease glutamate levels which prevents hyper-stimulation of glutamic receptors and concurrently withdrawal symptoms.