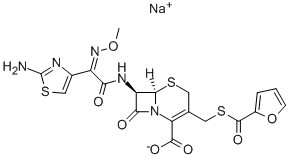 Ceftiofur sodium is a third generation cephalosporin antibiotic effective against gram-positive and gram-negative bacteria. Although ceftiofur is resistant to β-lactamase degradation, there are several strains of E. coli known to be unaffected by this antibiotic. It is soluble in aqueous solution.