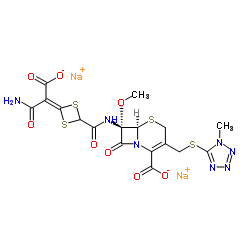 Cefotetan disodium is a semi-synthetic β-lactam antibiotic that is classified as a second generation cephalosporin. Cefotetan disodium effects a broad range of gram positive and gram negative bacteria. It has also displayed a significant degree of bactericidal activity towards aerobic and anaerobic bacteria.