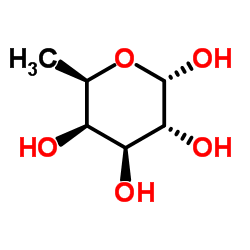 α-D-fucose inhibits the eukaryotic enzyme Lysine-specific demethylase 1 (LSD1A), thereby causing gene repression. α-D-fucose is being explored in treatments for neurodegenerative diseases because of its effect on gene repression. Seen upregulated in many cancers, LSD1A overexpression pushes the cell cycle of otherwise non-transformed cells so α-D-fucose is being explored in cancers treatments as well.