Dithiothreitol (DTT) is the common name for a reducing reagent also known as Cleland's reagent. DTT is a particularly strong reducer because once in its oxidized state, it forms a very stable ring structure with an internal disulfide bond, which makes it harder to oxidize back to its reduced state again. DTT can also be used for reducing the disulfide bridge of the cross-linker N,N′-bis(acryloyl) cystamine to break apart the matrix of a polyacrylamide gel. DTT is a nearly 7-fold stronger reduction agent than βME (β-mercaptoethanol) and does not have the repulsive smell or toxicity of βME. GoldBio’s DTT is the purest DTT on the market and is Proven and Published™ to ensure a quality reagent with optimal potential.
Showing 1-1 of 1 item. 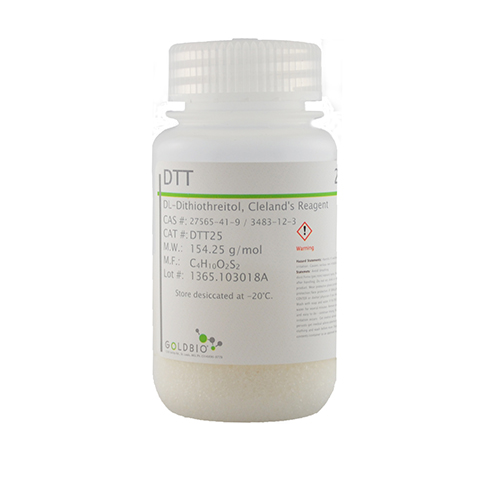