The Science and History of Glow Sticks

https://goldbio.com/documents/3916/Glow Stick ...It was August when thousands of bicyclers assembled in a city street, the dark evening ignited by streetlamps and wheels aglow with hues of red, green, blue and purple. A radiating energy pulsed through the crowd as gears shifted and feet were poised over pedals. The sound grew until a cheer of excitement rumbled, echoing between the buildings and towards the stars above. With a signal given, the bikers all took off at once and carried with them a hypnotic technicolor display of reflectors, string lights, and ever-popular glow sticks. This is the Moonlight Ramble, a semi-annual bike ride through the roads of St. Louis, Mo. Participants cover their bikes in fluorescent rainbows, braiding them through the spokes and adorning their handlebars with vibrant color to match the city. The ghostly kaleidoscope sweeps through St. Louis like wil-o-wisps or clouds of fireflies; the effect is spellbinding and evokes the summer season.

One of the main attractions for events like the Moonlight Ramble is the display of city lights and decorative elements like glow sticks. Glow sticks are popularly used to brighten concert, party, and camping venues, always providing a fascinating source of light and color.

Glow sticks are one example of chemiluminescence. A similar principle, bioluminescence, gives fireflies the power to light up and promotes the glow of some biochemical experiments. Such bioluminescent processes require luciferin or related bioluminescent substances; although glow sticks don’t contain luciferase reactions, they are no more complicated than the simplest radiant assay.

To honor luminescent sciences and end-of-summer festivities, we will illuminate the history behind these mesmerizing party favors and explain their mechanism.

From bike decorations to Halloween accessories, glow sticks have wide recreational use, but they were originally patented as a signaling device. This function is different from molecular chemical signaling – glow sticks were intended as emergency flares minus the open flame. Their reliable light source could be deployed in an emergency or by first responder services. Military personnel, divers, police and fire fighters were equipped with glow sticks to illuminate their fields of operation.

With this original purpose expanded, we now see the same devices being used at concerts and worn by costumed elementary schoolers. Even the inventor of the contemporary glow stick, Dr. Edwin Chandross, was surprised by their recreational popularity. When told about their use in music venues, his response was "Is that so? Maybe my granddaughter will think I'm cool now."

Dr. Chandross was inspired by witnessing luminol chemiluminescence at the Massachusetts Institute of Technology. He learned peroxalate esters are chemiluminescent when reacting with hydrogen peroxide; his discovery of the ideal proportion took one day, but he never patented it. Several years later, glow sticks using his formula were manufactured and sold to the public.

Mass-produced glow sticks were first applied in military activities then repurposed for concert apparel. Vice has published lore from the music community, citing the first instance of this practice at a 1971 Grateful Dead concert in New Haven, Conn. Here, the crowd began throwing activated glow sticks on stage for the performers to hold. This event became a trend that is now a tradition of widely distributing glow sticks at music performances worldwide.

Glow sticks have a high value when it comes to low-cost entertainment: no batteries or electricity necessary, cheap to produce, portability and high functionality as well as resilience. They last for hours and cost dollars for dozens of tubes. They’re the perfect party favor or location marker just as bioluminescent indicators illuminate our experiments and track important molecules.

The shine of these tubes is engendered by chemiluminescence rather than bioluminescence. This reaction is not organic, yet when chemical substances are combined, they produce an equally vibrant glow without additional sources of energy. In chemiluminescence, electrons in chemical compounds are excited, and their return to a normal level releases energy as light.

It only takes the mixing of a few chemicals to produce the hypnotic glow. A base, often sodium salicylate, catalyzes this reaction with a dye to create an exothermic reaction. These chemicals, along with diphenyl oxalate, compose the outer solution within the glow stick tube. An inner glass vial holds hydrogen peroxide, and when this is mixed with the phenyl oxalate ester, phenol and peroxyacid ester are produced.

Peroxyacid spontaneously decomposes to activate the fluorescent glow stick dye with its energy. The dye is then responsible for releasing photons when its electrons are excited. The faster these chemicals mix, the faster and more luminescent the reaction. This is why breaking the glow stick in multiple places and shaking it results in a brighter output. 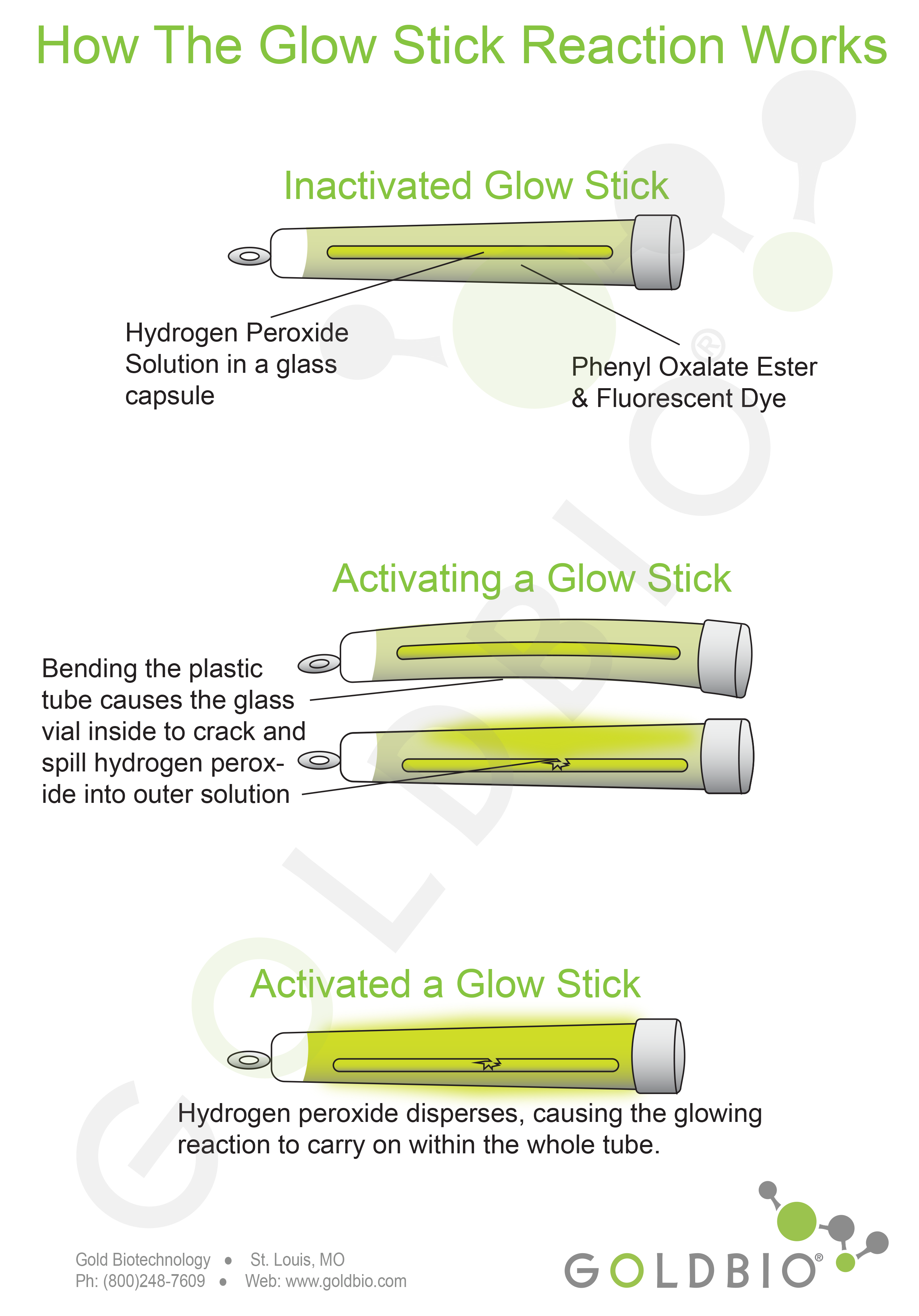 The concentrations of substances in this solution can be adjusted for a shorter, brighter glow or a lasting, dim light. Activation levels of light are the highest in energy and decay exponentially unless specific procedures are undertaken to revise this. By manipulating concentration, certain chemiluminescent recipes can engender brilliant light in a flash rather than glow. High quantities of sodium salicyate or other bases can have this effect.

How do glow sticks generate different colors, then? The incorporated dye determines photon wavelength, visible as the color of light emitted. Light is the most prevalent energy product of the reaction, because chemical transformations occurring within the tube can’t be sustained by a thermal reaction. As such, glow sticks can be specifically designed to function in hot or cold climates. Heating a glow stick – like adding base substances – will encourage a faster, brighter, briefer light omission. Don’t microwave a glow stick or place it in/on any heating device to see it brighten; this is hazardous to you and your appliance because the tube can burst and spill fluid and glass everywhere. Alternatively, cooling extends the reaction with less extreme glow. An activated glow stick frozen or refrigerated will dim but resume glowing when the temperature rises again. The cold augments glow longevity. Glow stick dyes also retain their fluorescence under ultraviolet light – even a spent glow stick may brighten when exposed to black light.

While the chemistry and history of glow sticks is extremely interesting to learn about, it is the experiences we have that lead to vivid memories we can share with each other.

Gaston, B. The Guy Who Invented Glow Sticks Had No Idea They Were So Popular (2013, November 26). Retrieved August 2, 2018, from https://thump.vice.com/en_us/article/4x8gjn/the-guy-who-invented-glow-sticks-had-no-idea-they-were-so-popular.

Nichols, M. How to Make Glow Sticks Yourself — Backed by Science! (2017, January 3). Retrieved August 2, 2018 from https://schooledbyscience.com/make-glow-sticks-backed-science/.

The Science and History of Glow Sticks
https://goldbio.com/documents/3916/Glow Stick ...It was August when thousands of bicyclers assembl...
Illuminating Your Party Food
You’re planning a birthday party, something amazing for someone amazing, and you want it to be mem...
The History of Luciferin and Luciferase
Who discovered luciferin? The history of unraveling the chemical reaction behind bioluminescence sta...
The Secret Codes Embedded In Firefly Flashes
Firefly luciferin is commonly used as a bioluminescent reporter in everything from cancer research t...