The Microbiome of the Litter Box, Cats and Human Health Our increasing awareness of the human microbiome has promoted research on bacteria, fungi, pathogens and other microbes which coexist around and within our bodies. These unseen organisms influence our physiology and behavior. As methods and trajectories of such studies proliferate, scientists have expanded their perspectives to other species’ microbiomes.

Companion species – livestock providing sustenance and domesticated animals we cohabitate with – are of particular interest to researchers. One such species, cats, has validated the model of individualized microbiomes in non-human organisms. From this confirmation, we infer their distinctions originate in varied diet and environment, consequently affecting each cat’s health and behavior.

Recent science confirms that human interaction with cats has impacted their microbiome. Inversely, studies have proved companionship with cats can benefit the human microbiome. Scientists are exploring the relationship, comparing the everyday cat owner to their four-legged friend. Much of this research comes from an unlikely place – the household litterbox.

The "Kittybiome" Project and Feline Health

Donations were crowd-funded by largely cat owners interested in findings which would improve feline health knowledge. Donors sent samples of their cats’ feces and received their sequenced DNA in return. Alternatively, pledges were relegated to sequencing DNA from shelter cats and individuals from wild species of the felidae family, including leopards, pumas, lions and cheetahs.

They hypothesized unique colonies of bacteria impact feline health and behavior as they do in humans. Researchers anticipated a relationship between the concentration of strains and a cat’s individual characteristics: temperament, body condition, digestive patterns, indoor/outdoor living status and antibiotic exposure. Substances produced and consumed by the bacteria determines their interaction with the feline host and promote either favorable or disadvantaged health. In the last two years, Kittybiome has been using advanced DNA sequencing techniques to determine concentrations of bacterial, fungal and other microbial populations in feline digestive systems. The process involves tactics similar to human microbiome testing. DNA is prepared to standard concentrations using PCR, purified, and then sequenced for bacterial identification. As with human microbe sequencing, ultra-high-throughput microbial community analysis is used. Kittybiome’s process features the specialized Illumina MiSeq platform to target specific DNA. Bacterial taxa are identified in a sample by their V4 hypervariable region, a portion of the 16S rRNA.

Kittybiome has also ratified research which diagnoses low microbial diversity as a contributor to feline digestive problems. Digestive systems with low concentrations of beneficial bacteria are more sensitive to the negative effects of stomach pathogens and antibiotic use. This month, an update to Kittybiome’s data provided the statistic that 10% cats in the U.S. and U.K. have such chronic digestive problems.

Medical progress has already resulted from Kittybiome’s data. A new treatment for feline diarrhea is being developed, microbiotic supplements which introduce and increase the presence of anti-inflammatory and digestion-promoting colonies. Trials with pets volunteered by their owners have resulted in improved microbiome representation. The study continues today with more donations – both funds and samples – promoting Kittybiome’s success as a scientific inquiry. Understanding the cat microbiome doesn’t just improve the health of our pets. Past research reveals similar microbiome phylogeny and functional capacity between humans and companion species. Cats rely less on microbes for digestion than we do, but their microbiome is still an important component of general health. The presence or absence of certain strains determines wellbeing in cats and humans; both species are potential vectors for microbes passed to the other. Pet health is therefore relevant to owner health, implicit in the microbe exchange of cohabitation.

Microorganism presence is low in the “indoor microbiome” maintained by modern sanitation. At extreme levels, a hygienic environment can be disadvantageous. Underexposure to innocuous microbes can induce heightened immunological responses (i.e. allergies and asthma) – if certain strains are absent from the diet or environment, health can suffer from conditions like impaired digestion. Microbial groups are necessary for the development of functional immunological and digestive systems, so encountering harmless strains promotes long-term wellbeing.

The indoor microbiome is diversified by the presence of cats which carry different species of bacteria and fungi than humans do. Cats transfer new strains to the human environment, transporting them from outdoors and emitting species from their own dietary microbiome. Felines have been documented to incorporate 24 categories of bacterial species into our homes, indoor cats carrying less diversity.

Further inquiry in a 2013 survey showed infants who lived with companion species did not contract wheezy bronchitis by age two. A 16% reduction was observed in atopic characteristics with perpetual cohabitation. Pathology thus appears to be reduced by the immunological exchange with companion species.

Also recorded by the survey was an increased population of Bifidobacteria longum, complimented by lower occupation of Bifidobacteria breve. Bifidobacteria longum is important for the development of infant GIT microbiomes – results suggested that raised colonization “conferred protection” for the digestive system. Likewise, “Bifidobacterium breve heightened risk of crying and fussing during the first months of life of an infant,” so its comparatively low presence suggests profit for humans. The implication of these discoveries support the physiological gains of cat cohabitation.

Research is still being conducted to quantify the positive influence cat-vectored microbes have on other aspects of human health, digestion and mood. Future research will delve into active samples from the digestive system to visualize metabolic interactions and responsiveness. Relevant phylogeny may also be visualized in immunological systems of microbes from the nose and ears.

Science has led to an increasing appreciation for the invisible organisms of our environment. Now, we have seen the organisms we know and love – our pets – carry additional benefits for us in the form of such microbes. There is potential for future probiotic-like supplements derived from the microbiome of companion species. Until then, you can reward your furry family members with a treat for their contribution to your health. That’s a trick you can’t teach. 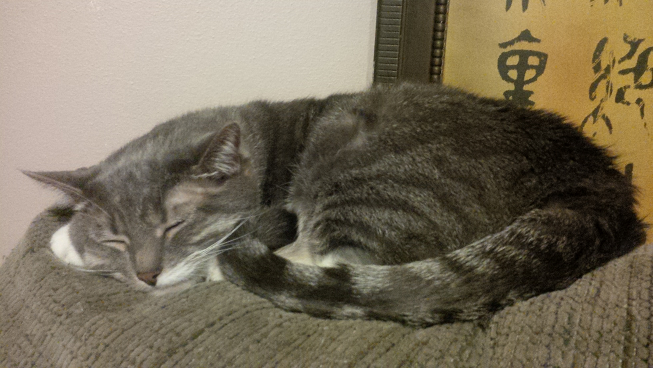 The Microbiome of the Litter Box, Cats and Human Health
Our increasing awareness of the human microbiome has promoted research on bacteria, fungi, pat...
How to Detect Cell Culture Contamination
During tissue culture work, finding unwanted contaminated culture flasks can create many issues, inc...

Sharing with your pets: zoonotic disease and anti-microbial medicines
We normally wouldn’t consider our own pets as risks to our health. When parasites become involved,...