How Predatory Bacteria Could Help Us Defeat Harmful Bacteria

Multidrug resistant bacteria are a serious threat to public health worldwide due to the lack of new antibiotic drug discovery in the pharmaceutical industry.

According to Dr. Daniel Kadouri from Rutgers School of Dental Medicine, antibiotic resistance has become “a perfect storm.”

“For the Gram-positive bacteria, it is an issue as well, but we still have a handful of antibiotics that we can use. But, using antibiotics for Gram-negative bacteria is very challenging because they have two membranes,” he further explained.

To overcome this issue, there has been a growing interest in exploring other options to treat multidrug resistant bacteria. One of the potential options is to use predatory bacteria.

This group of bacteria shares a common characteristic with high-profile predators, such as lions or tigers: They ferociously ‘hunt’ their prey. Instead of using jaws or claws, these bacteria penetrate their prey’s membranes, grow inside, and kill it—eerily similar to the creature in the movie “Alien.”

Interestingly, the preferable prey for some predatory bacteria are Gram-negative bacteria, including those with antibiotic resistance. 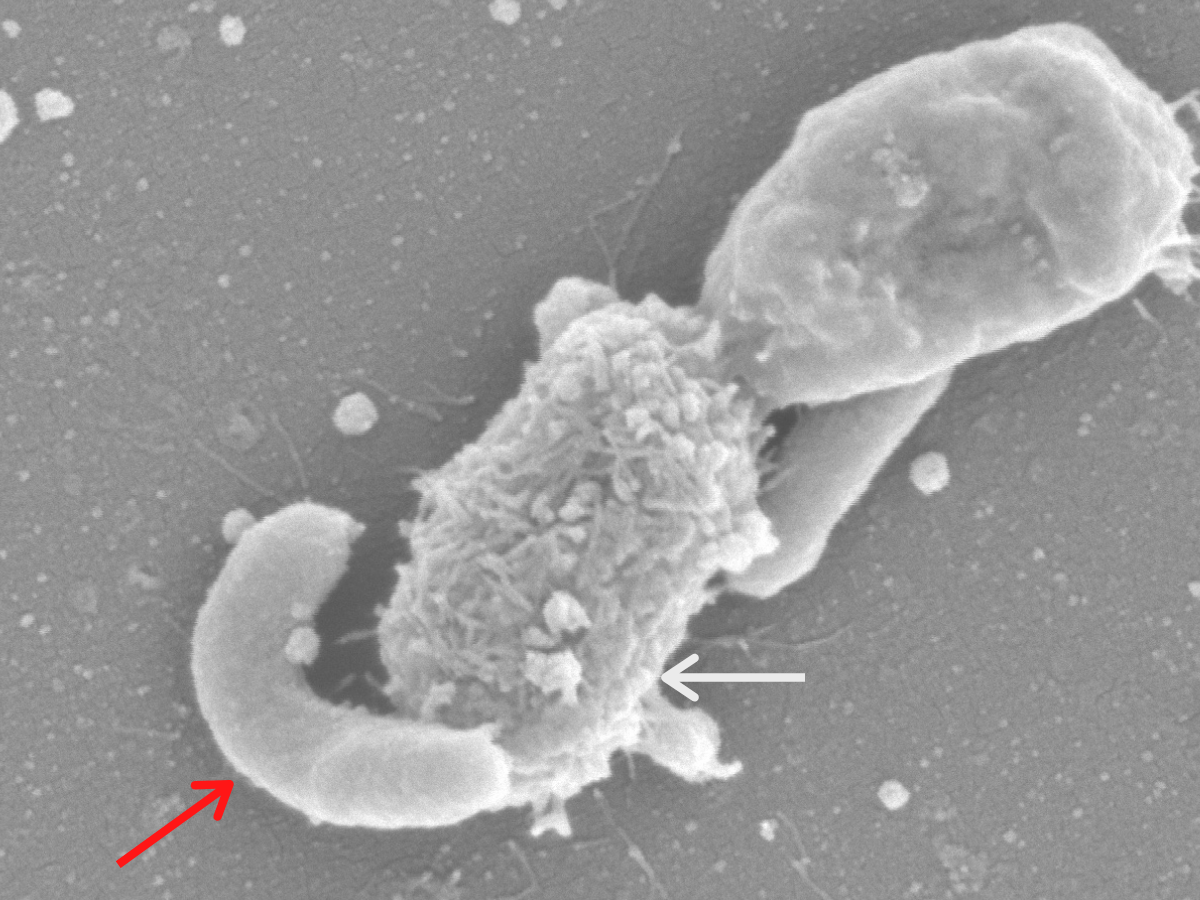 What are Predatory Bacteria?

For predatory bacterium, Bdellovibrio bacteriovorus, this necessity to find a prey forces it to switch from one stage to another stage in its life cycle.

Diagram of the Life Cycle of a Predatory Bacterium, Bdellovibrio bacteriovorus. There are two stages of the life cycle: attack phase (AP) and growth phase (GP). The free-swimming stage of the attack phase is in water or soil. The growth phase inside its prey is also known as a bdelloplast.

Potential Use of Predatory Bacteria

During the last decades, there have been efforts to explore the potential use of predatory bacteria as living antibiotics (Dwiddar et al., 2012). Predatory bacteria, such as B. bacteriovorus and M. aeruginosavorus, are able to prey on human pathogens resistant to multiple antibiotics.

In the study by Kadouri et al. (2013), B. bacteriovorus was able to attack and reduce 117 of the 135 multidrug-resistant bacteria. These include bacteria from the genus Acinetobacter, Burkholderia, Escherichia, Klebsiella, Pseudomonas, Salmonella, Serratia, Shigella, Vibrio, and Yersinia, which are associated with human infections.

M. aeruginosavorus ARL-13 attacked and reduced 145 of the 177 examined bacteria, from 10 different genera (Kadouri et al., 2013). The most profound reduction in prey cell viability was measured for bacteria from the genus Burkholderia, Escherichia, Klebsiella, Shigella and Pseudomonas. 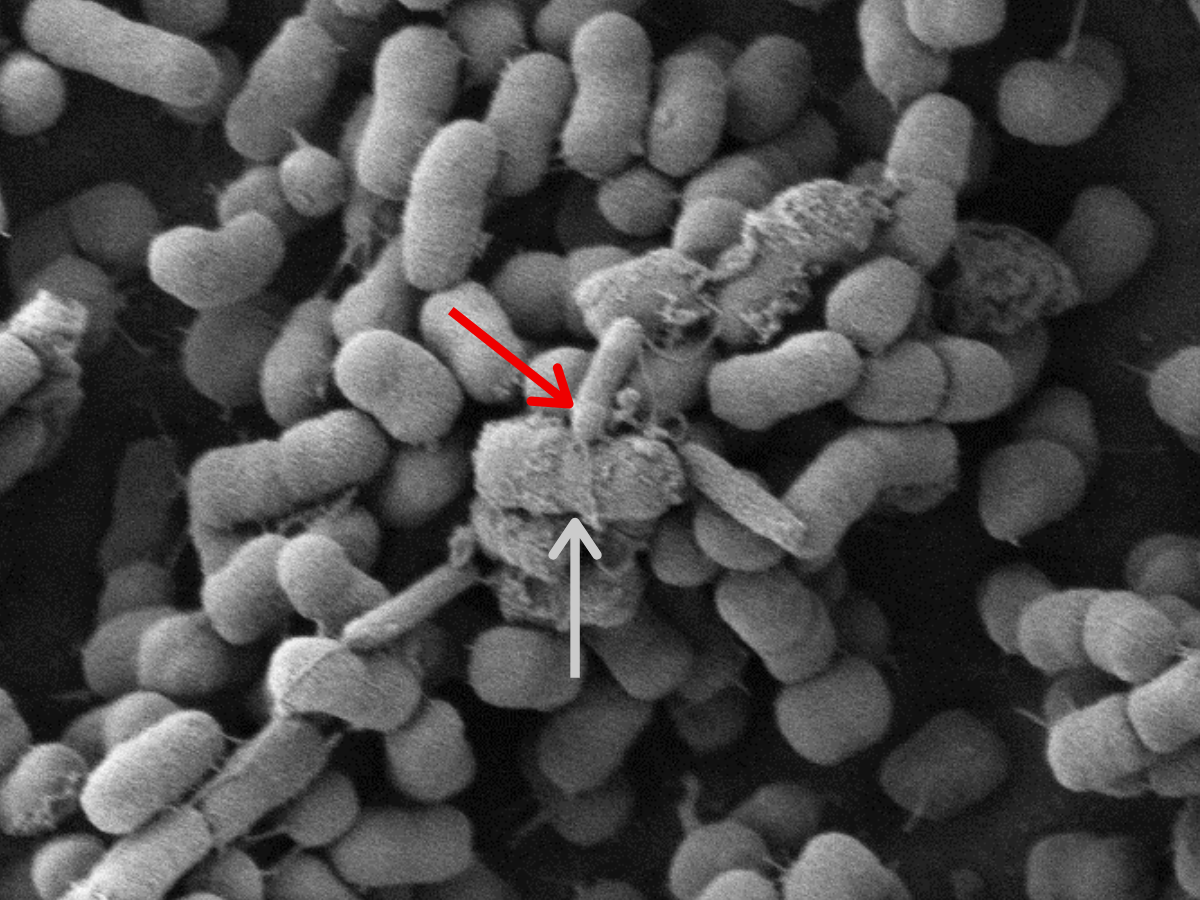 As a therapeutic approach, one possible way to use predatory bacteria is to treat more localized infections, such as wounds or cavities and use them together with antibiotics to treat infections.

Using bacteria for medical treatments definitely raises concerns regarding their safety and efficacy for us. It can cause concern about the risk of disrupting non-target bacterial microbiota inside our body.

A preliminary study in rats showed there were minimal shifts in the gut bacterial populations due to inoculation with B. bacteriovorus (Shatzkes et al., 2017). However, the same study found potential adverse effects in microbiota changes due to M. aeruginosavorus inoculation. In the future, researchers will investigate whether increasing the doses of the predatory bacteria may result in more substantial microbiota changes.

The biofilm structure protects microorganisms as a barrier against antibiotics, which means bacteria in it are most likely to avoid antibiotics until the danger passes by. What causes widespread concern is biofilms have become an ideal place for bacteria to exchange and gain new antibiotic resistance.

One strategy to remove a biofilm is by dispersing and detaching the structure (Hall-Stoodley et al., 2004). B. bacteriovorus can aggressively attack bacteria in biofilms, shifting the population from sessile to motile, which are cells that are capable of moving, and disrupting the biofilm (Wucher et al., 2020; Núñez et al., 2005). The disrupted structure could make these biofilms more vulnerable to other treatments, such as antibiotics.

Therefore, predatory bacteria have great potential as our dependable ally for antibiotics in a more holistic approach to treat biofilms.

Probiotics in the Poultry Industry

In chicken farming, Salmonella coming from chickens is a primary contamination source. One way to take care of this issue is by feeding antibiotics to chickens. Consequently, this approach creates additional concern about antibiotic resistance.

To overcome these issues, scientists have explored using predatory bacteria as probiotics in the poultry industry. According to the study by Atterbury et al. (2011), before exposing Salmonella to young chicks, feeding them predatory bacteria (by using a gavage needle) helped reduce Salmonella in their digestive system.

Wastewater treatment plant reactors are important places where water is recycled in urban areas. Unfortunately, these places become ‘hotspots’ for the emergence and transmission of antibiotic resistant genes among bacteria (Bratanis et al., 2020; Manaia, 2018). Predatory bacteria, thriving in these places, could help us limit the spread of antibiotic resistance and reduce these harmful pathogens (Bratanis et al., 2020). However, more studies are still needed to explore this possibility.

Are Predatory Bacteria Safe for Us?

The next question surrounding the potential use of predatory bacteria would be whether they are safe for us. Luckily, despite their intimidating title, B. bacteriovorus and M. aeruginosavorus still prefer Gram-negative bacteria as their prey, not mammalian cells.

Some studies demonstrated these bacteria were nonpathogenic to mammals and they caused no toxicity to more than 20 mammalian cells lines, including human cell lines (Bratanis et al., 2020; Romanowski et al. 2016). Furthermore, based on research investigating the safety of predatory bacteria for animals, such as mice and rabbits, Dr. Kadouri said, “They don’t cause any kind of negative immune responses to the animals.”

It may take a while until predatory bacteria can be used as a therapeutic agent or used for other purposes. To make this possible, there is still more research to be done, but continuing to explore these potential uses may just be the help we need to solve the growing problem of antibiotic resistance.

A special thanks to Dr. Daniel Kadouri (Rutgers School of Dental Medicine) for taking the time to share his interesting research and the potential applications of predatory bacteria.

World. (2017, February 27). WHO publishes list of bacteria for which new antibiotics are urgently needed. Who.Int; World Health Organization: WHO. https://www.who.int/news-room/detail/27-02-2017-who-publishes-list-of-bacteria-for-which-new-antibiotics-are-urgently-needed.

How Predatory Bacteria Could Help Us Defeat Harmful Bacteria
Multidrug resistant bacteria are a serious threat to public health worldwide due to the lack of new...
Shooting ‘Poison Arrow’ Drug to Kill Superbugs
Antibiotic resistance has become our worst nightmare worldwide. In hospitals around the world, curre...
Becoming a Cell Minimalist - Scientists Synthesize Bare Essential Bacterial Genome
In the Search for the Essentials of a Minimal Life-form - Learn about the obstacles Venter, Smith...
Using Firefly's Light to Find a New Cure
Have you ever caught fireflies in the summer and watched as they crawl over your hands? It’s fascina...