Insects have an established history within folklore and mythology. Butterflies, bees, scarabs and other bugs have become symbolic markers of rebirth, purity, life and death. The firefly, with its enchanting light is no exception. In ancient Amazonian mythology, firefly light came from the gods and provided hope and guidance (Kritsky & Cherry, 2000). And in Japanese legend, two species of firefly, the Genji-hotaru and the Heike-hotaru, are associated with the ghosts of the Minamoto warriors and the Taira warriors. Each year in Japan several viewing festivals start up during the month of June to see the "battle of the fireflies." Fireflies, in ancient times, were also believed to offer universal remedies, counteracting poison and driving away evil (Davis, 2008). 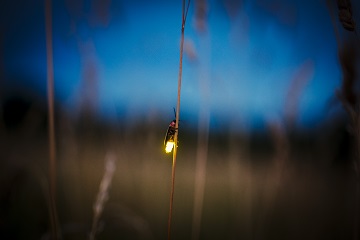 It’s no surprise that in modern times, we still draw from the inspiration and curiosity of the firefly’s flickering radiance. As a result, fireflies continue to fulfill their legendary roles, not quite literally, but they presently hold an important position within guidance in healing. Popularly, luciferin, the magic behind the firefly’s glow, has been used in cancer research. Scientists use the methodology behind the luciferin-luciferase relationship to study cancer metastasis and tumor growth.

But the importance of luciferin is not limited to the study of cancer. Engineers at MIT are using the glowing concept to turn plants into natural lamps. Rather than genetically altering a plant, making it capable of luciferase expression, the researchers at the Strano Lab at MIT are using nanoparticles packed with the chemical components necessary to carry out the luciferin-luciferase reaction. And so far, the team has been successful in adapting this technology in several plant types (Trafton, 2017).

While glowing plants have the potential to benefit the world, relieving us of some aspects of energy dependence, it has also allowed researchers to visualize plant reactions to certain stimulation. Back in 2000 plant geneticist Janet Braam used this iconic chemical relationship to study plants’ reactions to human touch (Riley, 2000).

Braam’s early studies showed evidence that regular human touch could negatively stunt the growth of certain plants. To further her research on this topic, she incorporated the glowing mechanism with plant "touch genes." When a plant was touched, it glowed where it was touched. Further, she observed that over time, other areas of the plant glowed causing her to suspect that the “information” traveled through other areas of the plants switching on those "touch genes" (Riley, 2000).

There are countless studies that have used this marvelous mechanism. The mysticism of these glowing creatures, along with many other bioluminescent organisms continues to inspire our curiosity and guide us on a path of unimaginable discovery.