In part two of our series of blogs highlighting recently published research involving the use of bialaphos and PPT, we now present a summary of exciting research utilizing Gold Biotechnology’s bialaphos and phosphinothricin (PPT) to demonstrate dramatically improved Agrobacterium-mediated ryegrass transformation.

Perennial ryegrass, or Lolium perenne, stands as the preferred cool-weather pasture and forage grass in many regions throughout the world and it serves as an important groundcover. Although perennial ryegrass is suitable for all grazing livestock, it is primarily used as the main source of nutrition for lactating dairy cows, due to the superior quality and digestibility of this species. Ryegrass is also widely utilized as a turf grass and southern state `overseed’, comprising about 40% of the nearly 50 million acres of US lawns, and it is a favorite for use in sporting fields, such as the Kansas City Royals’ Kauffman Stadium, the Seattle Mariners’ Safeco Field and golf courses worldwide.

Despite the broad cultivation of this diploid monocot, it has been quite recalcitrant to genetic modification methods, save traditional breeding, with previous transformation efficiencies reaching only about 1%. In a recent publication, North Carolina State scientists working under a grant from Bayer Crop Science and using GoldBio’s bialaphos and PPT, reported a dramatic improvement in transformation of Lolium perenne. The researchers achieved a level of 20% transformation efficiency via cocultivation of ryegrass callus with an Agrobacterium tumefaciens strain harboring a binary vector. This plasmid contained the bar gene, which provides resistance to bialaphos and PPT, and a gene encoding green fluorescent protein (GFP).

To take this significant step forward, the researchers at North Carolina State developed a variety of modifications to traditional methods of transforming perennial ryegrass. Transformation efficiency during each experiment was measured by counting the number of GFP-expressing callus and dividing this sum by the total number of callus cocultivated with the Agrobacterium strain.

The group first demonstrated a two-fold improvement in transformation efficiency via a change in infection culture medium. The scientists employed a Murashigie and Skoog (MS)-type media, instead of the more traditional YEP infection medium, when culturing the Agrobacterium strain. The strain was then used to infect two-to-six month old ryegrass callus tissue.

Next, the team determined that a three minute 42 °C heating treatment during the initial infection with the Agrobacterium strain allowed them to achieve a four-fold increase in GFP-expressing callus selected on GoldBio’s bialaphos or PPT (Figure 2 below). Further experiments (Figure 3) showed that increasing the maltose concentration from 3% to 6% in the cocultivation medium and switching to NS6 medium (similar to MS) for that step gave an additional four-fold increase in efficiency. 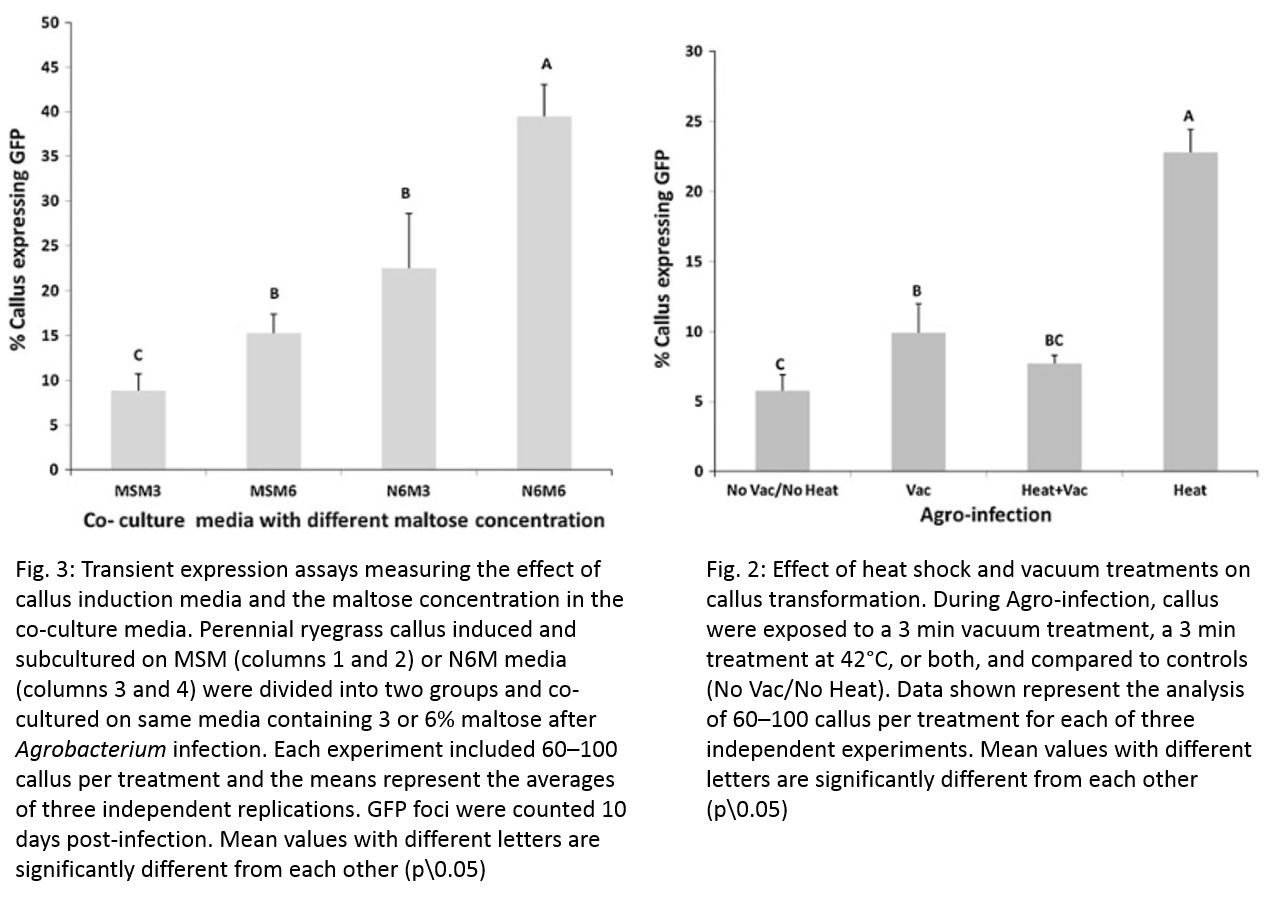 When transgenic bialaphos-resistant GFP-expressing plants were eventually grown from callus tissue transformed using a combination of the medium modifications and heating step described above, the efficiency was shown to be more than 20%, marking a 20-fold improvement over previous efficiency in this agriculturally important plant species. This equates to an average of 20 GFP-expressing plants, like those pictured in Figure 7, per 100 callus transformed. The authors proceeded to apply this learning to transformation of rice, Oryza sativa, and observed significant improvements in efficiency with that critical crop as well. 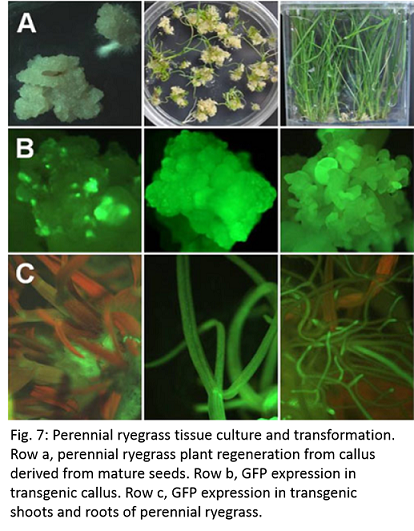 Our third blog entry in this series will discuss the generation of bialaphos-resistant soybean, using GoldBio products, that was developed at Nanjing University. GoldBio is excited to be the choice of researchers seeking to further understanding of the biology of crop plants important to populations throughout the world.

Catching GoldBio’s Bialaphos and PPT 'in the Rye'grass Transformation Protocol of Tomorrow
In part two of our series of blogs highlighting recently published research involving the use of...
GoldBio’s Bialaphos is Used to Raise the Bar (Gene) Even Higher
Farmers are constantly in need of a more diversified herbicide treatment program. Though RoundUp h...
Four Steps to Design an Effective Medium for Plant Regeneration
When considering a medium for plant regeneration, there are a lot of considerations for optimizing a...
How to choose the right Agrobacterium vector for plant transformation
One of the key factors influencing an Agrobacterium-mediated gene transformation is the vector sel...