For today’s blog post, we’re going to shine a spotlight on a widely used technique in the field of molecular biology, Blue-White screening. While this technique has been around for some time, it is still very important to researchers doing genetic engineering because it is a quick and easy way to determine if your gene of interest has been successfully ligated into a host plasmid. In this article, we’ll go over the technology behind Blue-White screening and what’s necessary to make this technique works.

To begin with, we will first need to talk about the β-galactosidase enzyme (or β-gal for short) and some if its properties. β-gal is a naturally occurring enzyme in E. coli cells that’s main function is to cut lactose molecules into glucose and galactose, so the cells can utilize lactose as food source. Typically this enzyme is encoded by a single gene in the bacterial chromosome, the LacZ gene, and in its active form it’s composed of 4 identical sub-units. Later, researchers discovered a mutant form of the LacZ gene in the M15 E. Coli strain that was missing a short string of amino acids from its N-Terminus, and it produced a non-functional β-gal (known as the ω-peptide). However, researchers then found that if they produced the missing fragment (the α-peptide) in another part of the cell, the two fragments would join together and the enzyme functionality would be restored. This technique is known as α-complementation and was published in 1967 by Ullman, Jacob, and Monod in the Journal of Molecular Biology. This may seem like ancient history in the field of molecular biology, but it was a revolutionary new discovery in the way that proteins are made and interact, and we are still utilizing this today.

In order to utilize the α-complementation technique for the purpose of Blue-White screening, you need a few supplies. First you will need an E. coli cell line that contains the mutant LacZ gene for the ω-peptide, typically denoted in the genotype as Δ(lacZ)M15. Next we will need a plasmid that contains the gene for the α-peptide with a Multiple Cloning Site (MCS), and of course your gene of interest. These items are commercially available, and typically both of the genes will be under the control of the lac operon, which means they are inducible with IPTG (Isopropyl-β-D-thiogalactoside, a lactose analog). Next we will need a chromogenic substrate, such as X-Gal (5-bromo-4-chloro-3-indolyl-β-D-galactopyranoside). In a cell line that has a full LacZ gene and produces a functional β-gal, when they are plated on media containing X-Gal the β-gal enzyme will cleave the colorless X-Gal and form an insoluble bright blue precipitate, which will turn the bacterial colony blue. If the β-gal enzyme is not functional the colony will remain white on the plate.

By inserting your gene of interest into the MCS of the host plasmid, you disrupt the coding for the α-peptide. Then once the plasmid is transformed into the bacterial cell, it will not bind to the ω-peptide, and will not form a functional β-gal enzyme. This allows you to quickly screen a transformation plate to determine if your gene of interest was successfully ligated into the host plasmid, because the correct colonies will be white due to the knocked out α-peptide, while the background colonies will be blue due to the functional α-peptide. While this technique isn’t completely foolproof, it can be an incredibly useful tool for genetic engineering, especially when cloning into a blunt-end cut site, or other techniques that show high levels of background recombination.

For more information on the preparation of Blue-White screening media and the necessary chemical reagents, a protocol can be found on our website, or you can contact us any time at techsupport@goldbio.com. Thanks for reading!

Be sure to watch our YouTube video on Blue-White Screening here: 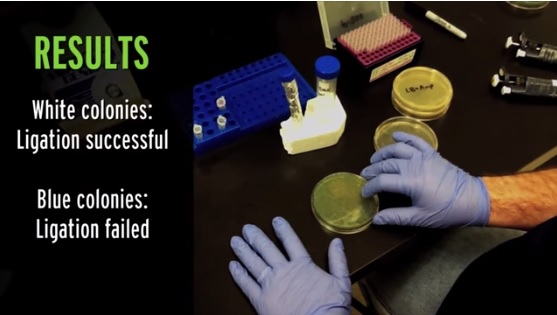 1. Ullmann, A.; Jacob, F.; Monod, J. (1967). "Characterization by in vitro complementation of a peptide corresponding to an operator-proximal segment of the beta-galactosidase structural gene of Escherichia coli". Journal of Molecular Biology 24 (2): 339–343.

How To Interpret RT-qPCR Results
You have just finished your real-time quantitative reverse transcription PCR or RT-qPCR experiment....
Blue-White Screening
For today’s blog post, we’re going to shine a spotlight on a widely used technique in the field of...
Becoming a Cell Minimalist - Scientists Synthesize Bare Essential Bacterial Genome
In the Search for the Essentials of a Minimal Life-form - Learn about the obstacles Venter, Smith...
Why And How Proteins Are Used in Bioscience
Proteins are determinants of cell, tissue and organ structure and physiology. Proteins are a class o...