Picture yourself staying a winter night in the middle of the Arctic or lying in boiling thermal water with no protection or shelter.

It’s not possible – not for us anyway. However, it can be entirely possible for certain microbes to spend their lives in extreme environments.

Microbes have inhabited Earth for millions and millions of years and have evolved even to survive in very inhospitable environments.

An extreme microbiome is composed of microorganisms (extremophiles) able to survive under harsh conditions where no other living being would have any chance of surviving.

The extreme environments where these microbes live are characterized by low temperature, high temperatures, high salt content or hypersaline, and high/low pH, which are distributed worldwide.

These extreme environments actually retain a high biological diversity which has been approached to create biotechnological tools.

One of the most famous tools was Taq polymerase obtained from the bacterium Thermus aquaticus for thermal environments.

Many other microorganisms are being explored to speed their use for future needs in different industries such as chemical, food, and pharmaceuticals.

In celebration of these extreme microbes, we’re taking you through some of the most extreme environments and taking a look at bacterial distribution. 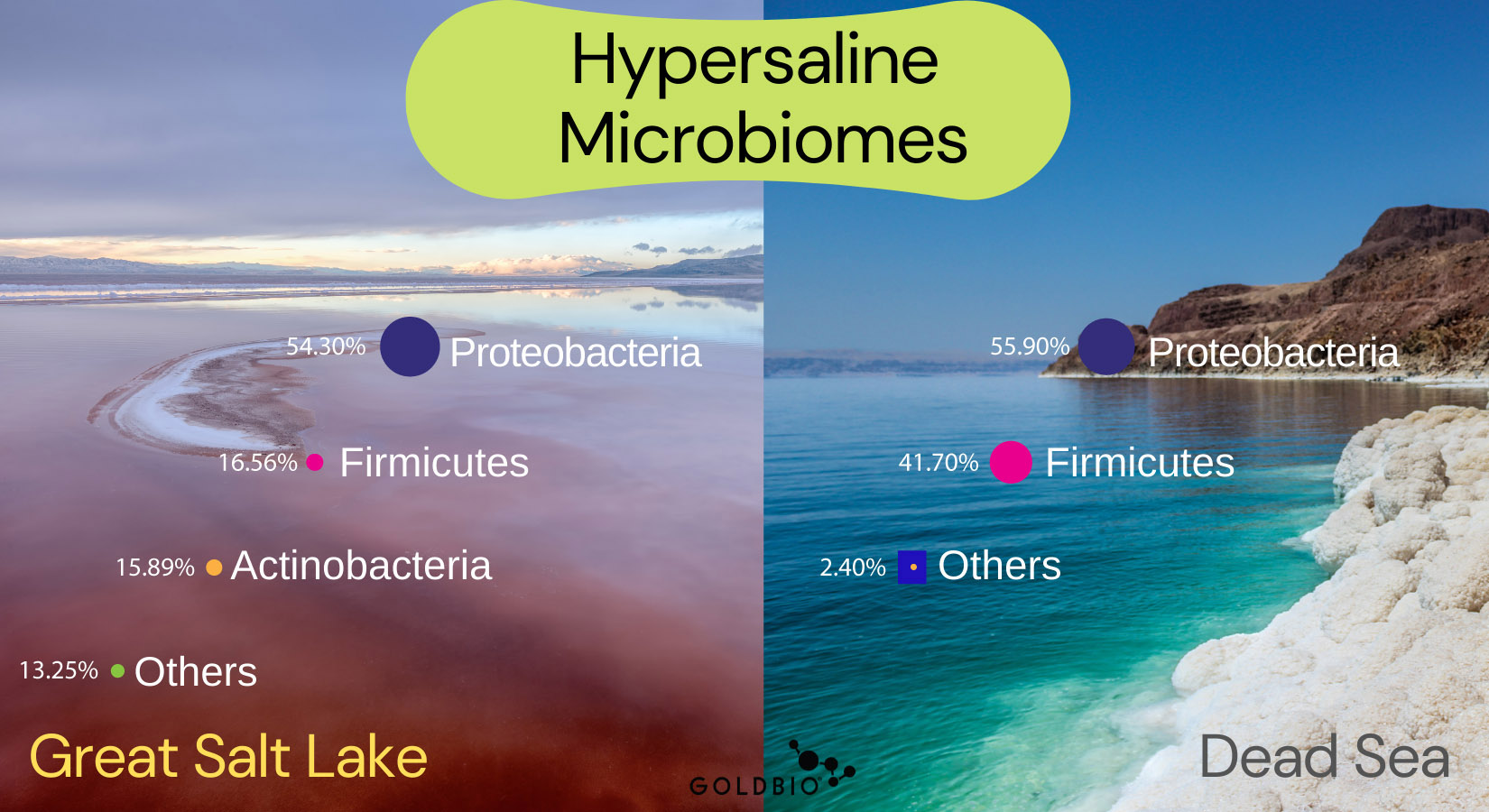 The microbes living in a hypersaline environment are called halophiles. Places such as the Dead Sea or The Great Salt Lake have allowed researchers to really study halophiles and the main taxa predominating these environments.

For instance, in the Great Salt Lake in Utah, USA, bacteria like Halobacterium and Halococcus are abundant.

Furthermore, another recent study reported that the Great Salt Lake is characterized by Proteobacteria (54.3%), Firmicutes (16.56%), and Actinobacteria (15.89%) phyla with the remaining 14% as other unknown microbes (Bhattarai et al. 2021).

Usually, the Great Salt Lake is compared to the Dead Sea located in the western part of Jordan.

The Dead Sea is characterized by 52% Archea and 45% Bacteria. Within Bacteria, Proteobacteria (55.9%) and Firmicutes (41.7%) are the most abundant in Dead Sea.

Some other factors explaining why these two salty places present different microbiomes include the temperature ranges and sea level.

On one side, the range of temperatures in the Great Salt Lake goes from -5° up to 35°C while the Dead Sea usually ranges between 21° to 36°C.

Furthermore, the Dead Sea is considered the Earth's lowest elevation on land (more than 420 m below sea level). 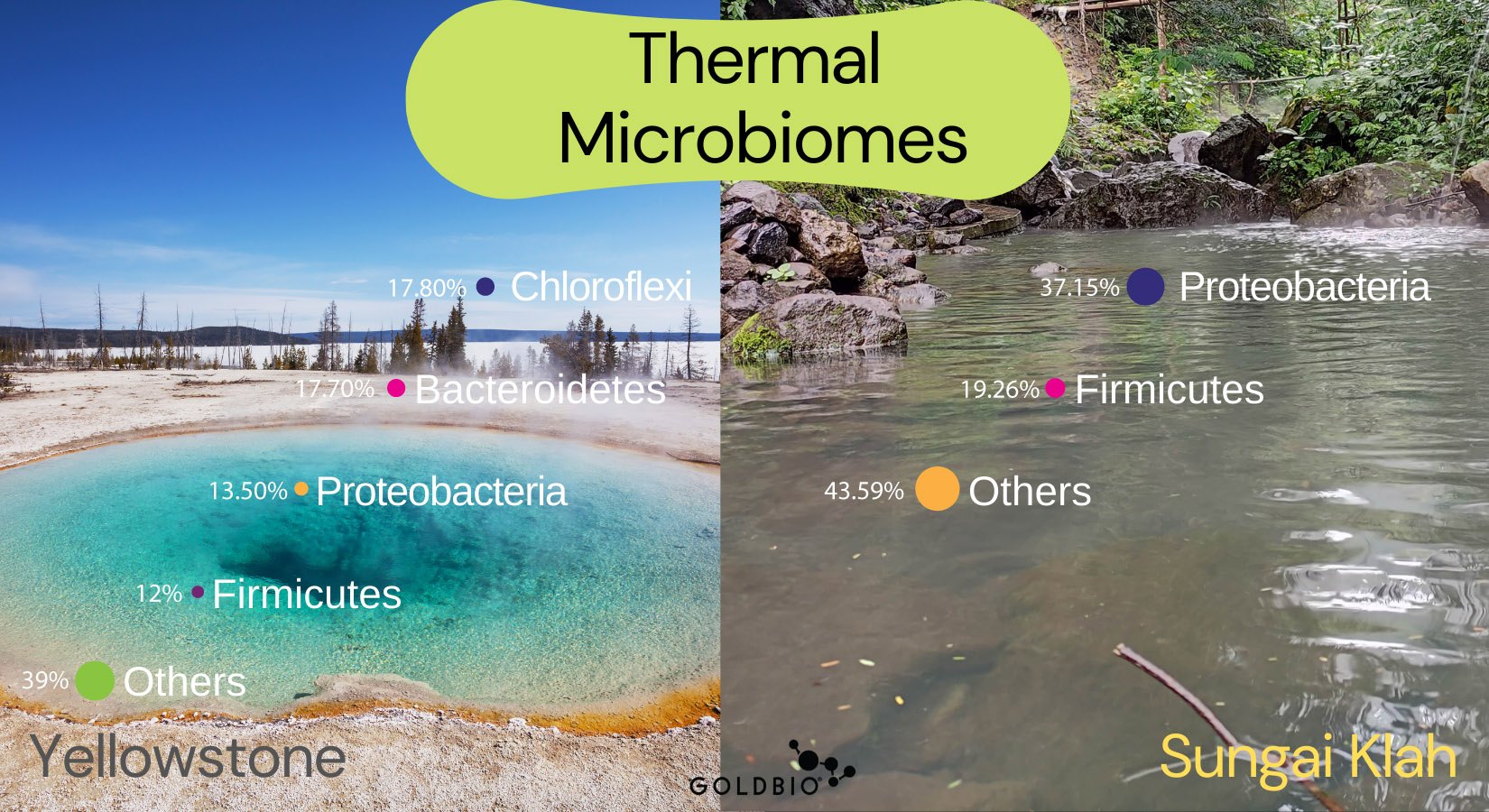 Microbes that can survive in very hot temperatures are called thermophiles.

A study at Yellowstone National Park characterized by waters between 44–75°C showed variations in the resident bacterial population over three years of study at the three sites with different temperatures.

For instance, the dominant bacterial community changed from moderately thermophilic to photosynthetic members (Cyanobacteria and Chloroflexi) at 44°C.

At 63 °C, researchers found a bacterial community of thermophilic bacteria that are also photosynthetic, or photosynthetic-thermophiles (Deinococcus-Thermus).

In another study based on 16S rRNA sequencing technology from Sungai Klah hot spring in Malaysia (50–110°C and pH 7–9), Firmicutes (37.15%) and Proteobacteria (19.26%) were found to be the most abundant phyla. Here the thermophile Hydrogenobacter spp. represented one of the major taxa.

Researchers believe this diversified phylogenetic community is due to the composition of its natural environment. For instance, the pile of fallen leaves in the ground (also called plant litter), plus shallow streams with their broad temperature and pH ranges, both contribute to this diversity. Furthermore, plant litter and geochemical parameters are also associated with allowing symbiotic relationships to occur between the members of the thermal community (Chan et al. 2015). 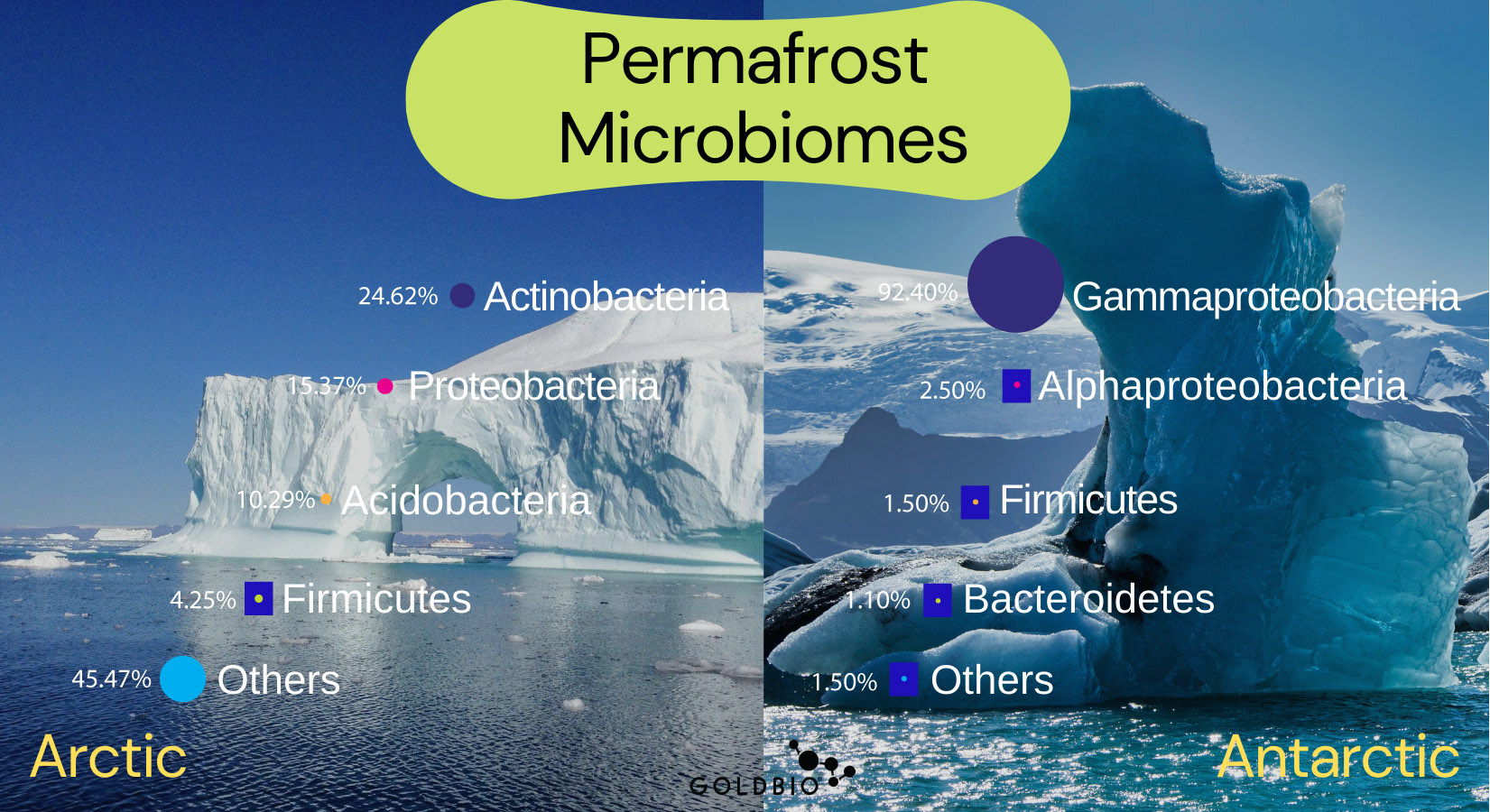 Microbes surviving very low temperatures are called psychrophiles. Permafrost environments are characterized by a permanent ice layer on their soils.

Independent studies have been carried out in both regions.

It has been suggested that Actinobacteria are successful in colonizing permafrost soils because they have adapted to harsh abiotic conditions and can degrade complex organic compounds, such as cellulose and lignin.

The hypothesis of how these microbes survive in these environments has been studied. Research suggests diverse bacteria can assimilate carbon dioxide from the air to create feed products using atmospheric trace gases like H2 and CO as energy resources (Lambrechts et al., 2019). 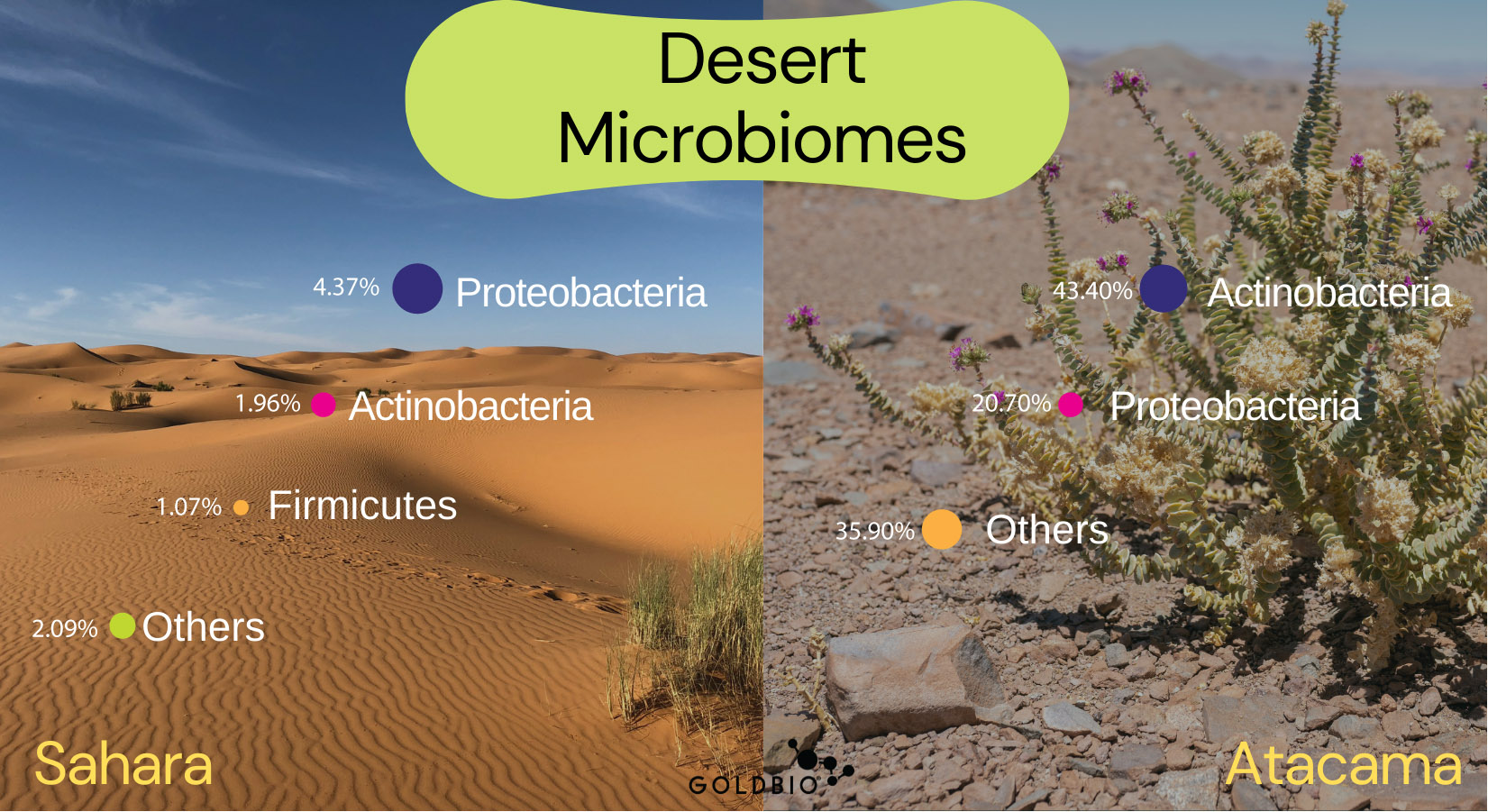 Incredibly, deserts are found on every continent, making up 33% of the total land area worldwide (Alsharif et al., 2020). 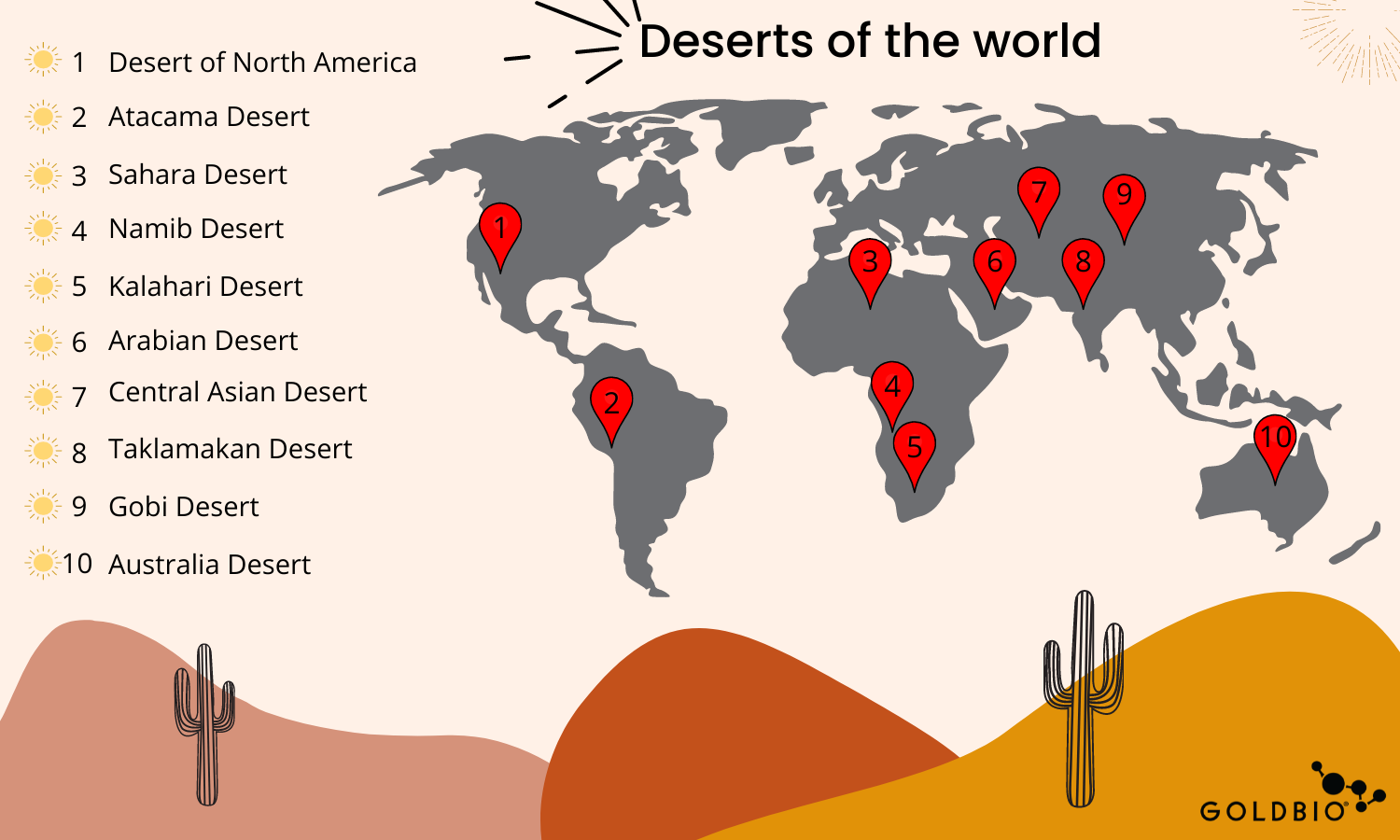 Desert soils from across the world typically contain many ubiquitous phyla, including Actinobacteria, Bacteroidetes, and Proteobacteria (Makhalanyane et al 2015).

However, in the Atacama Desert of Chile, most research takes model plants species and studies their rhizosphere-associated microbiomes.

The rhizosphere is the narrow region of soil or substrate directly influenced by root secretions and associated soil microorganisms. 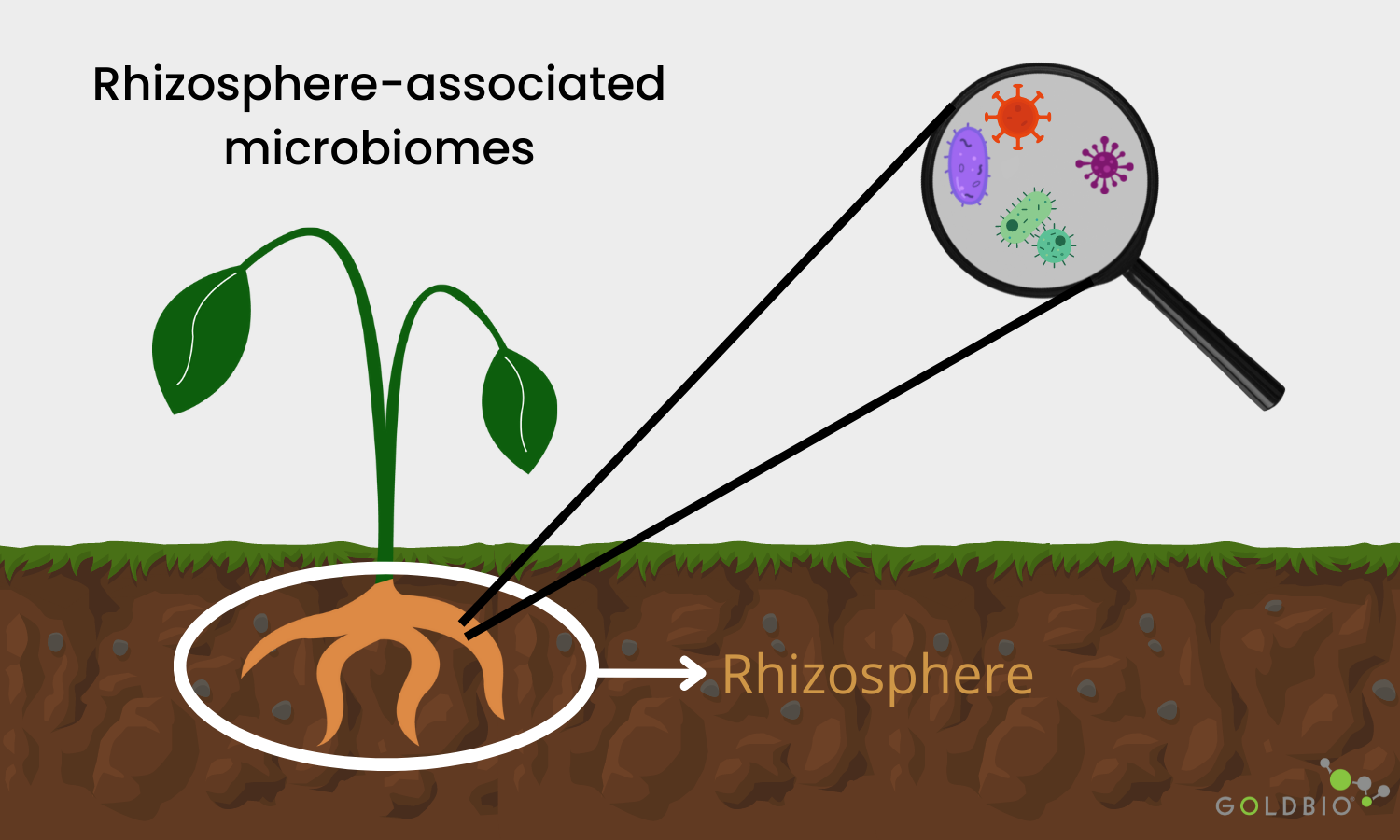 While the study of the rhizosphere can give us a very narrow idea of a specific desert soil, these microbes populations can be compared among plant species from different deserts. 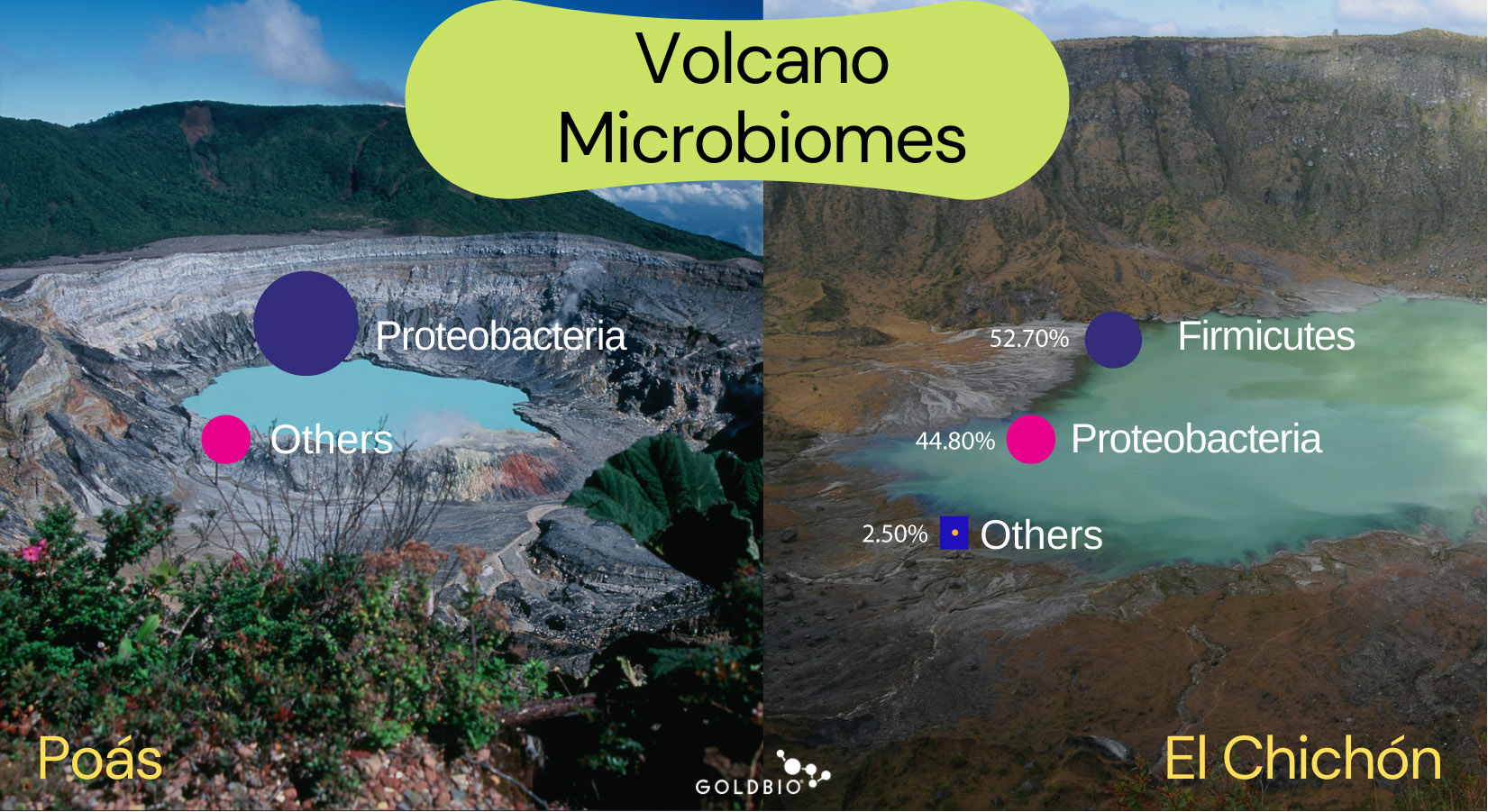 The active Poás Volcano, Laguna Caliente, in Costa Rica was sampled. This volcano is characterized by near-ambient to boiling temperatures, frequent internal eruptions, and pH fluctuations from −0.87 to 1.5.

Indeed, this volcano is an ultra-acidic, sulfurous crater lake primarily sourced through a subsurface groundwater system.

Researchers found that at the lake bottom, there was extremely low biodiversity of microorganisms dominated by Acidiphilium spp. belonging to Proteobacteria (Wang et al. 2022).

On the other hand, one of the most active volcanoes in Mexico is El Chichón volcano. The authors found that the bacteria phyla Firmicutes (52.7%, mostly Alicyclobacillus and Sulfobacillus) and Proteobacteria (44.8%, mostly Bradyrhizobium, Methylobacterium, Sediminibacterium) were the most abundant at 92°C (Peña-Ocaña et al., 2021).

Environments that are hostile to humans have been described as extreme. Microbes have evolved an arsenal of metabolites and enzymes to survive and even thrive in extremely challenging conditions over the years.

In this respect, the study of extremophiles and their cell components makes them suitable candidates for screening potentially interesting enzymes and novel compounds that provide benefits in chemical, food, pharmaceutical, paper, textile industries, and environmental biotechnology.

Deep Dive Into Common Types of Cloning Vectors
In this article we will learn about some of the cloning vectors commonly used in academic and indust... 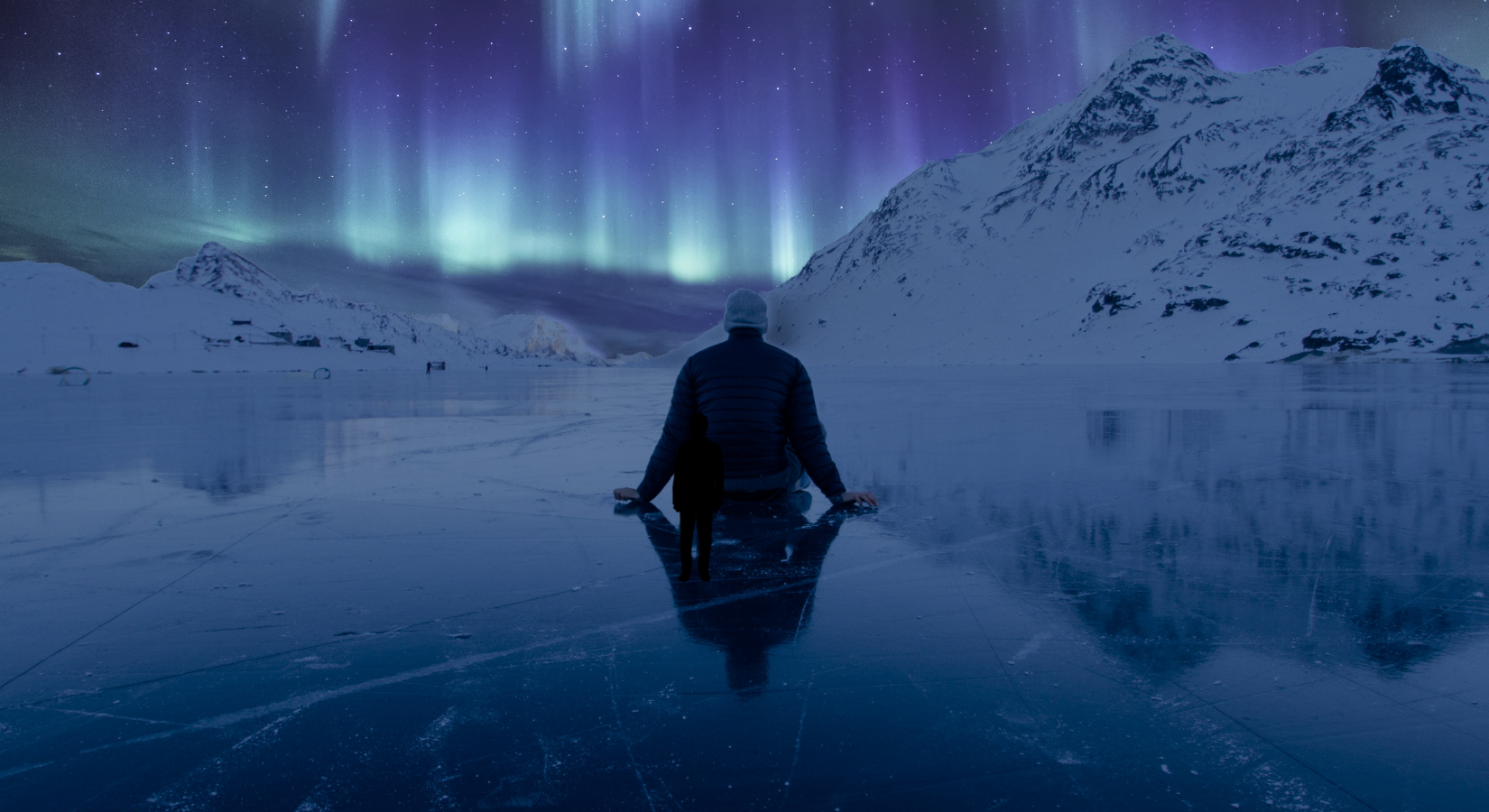 Top 5 Extreme Microbiomes
Picture yourself staying a winter night in the middle of the Arctic or lying in boiling thermal wate...
Four Steps to Design an Effective Medium for Plant Regeneration
When considering a medium for plant regeneration, there are a lot of considerations for optimizing a...
Publishing Failure in Science
I was sitting at a typical conference room table at a biomedical startup interviewing for an interns...