The Science Behind Our Dogs and Our Health

Indeed, the history of the human-canine bond dates back several millennia. Over centuries, the modern dog has evolved to be “man’s best friend.”

Dogs bring us joy and make us feel happy, but there is also real science to this – real biochemical events happening when we connect with our dogs. Not only do these events make us happy, but scientists are increasingly reporting health benefits our dogs provide.

From promoting psychological well-being to increasing cardiovascular fitness, reducing toxic inflammation to boosting immunity against diseases, biomedical literature is replete with the multi-faceted health benefits from our furry companions.

1. General boosting of mood and feeling of happiness:

A healthy way to multi-organs through the brain

As cliché as it may sound, our brain communicates within itself and other organs through chemicals: neurotransmitters and certain hormones. How we feel and behave, or how our body responds to external harm such as infections or stress is largely controlled by the secretion and concentration of these chemicals in the brain.

Recent research suggests interacting with dogs increases the production of those chemicals in our brain that make us feel happy and boost multiple aspects of our overall health. Some of the most common chemicals that get a healthy boost are oxytocin, serotonin, dopamine and endorphins – a recipe for happiness.

Oxytocin plays a pivotal role in shaping social behaviors such as bonding, affection, and maternal care.

Modern science says that when someone cuddles with their dog for even a few minutes, blood oxytocin concentration increases significantly.

Just like the deep bond between mom and baby, oxytocin plays a huge role in shaping the attachment you share with your pet dog. We consider our dogs our ‘baby’ for a reason, don’t we? It’s wonderful to see modern science biochemically validating that.

Remarkably, dogs have specifically evolved so that our oxytocin levels increase just by making eye contact with a dog or puppy.

Further, the stronger the bond between a human and a dog, the greater the oxytocin spike.

Serotonin plays a pivotal role in regulating a person’s mood by reducing depression and controlling anxiety. It can also help with bone health and healing.

Have you ever noticed how someone’s eyes widen when seeing their favorite food? Or how a deep sense of gratification creeps into our minds when we sit down all cozy to watch a favorite show?

A neurotransmitter called dopamine plays an important role during these moments. Dopamine is a key mediator controlling the reward and pleasure systems of our brains.

Dopamine is another neurochemical whose concentrations can spike in the nervous system as a result of human-dog companionship.

After a few minutes of vigorous exercise, have you felt refreshed and relaxed despite panting and sweating heavily? You can thank endorphins for that.

Produced by the pituitary gland in the brain, endorphins, in their very basic chemical structure, are long chains of amino acids.

While exercise is one way of getting some endorphins, interacting with our dogs is yet another thing we can do that leads to the synthesis of multiple endorphins.

The beauty of dopamine, oxytocin, serotonin and endorphins is their relationships.

So, when cuddling with your dog, multiple cascades of beneficial neuro-signaling often overlap and boost each other.

As mentioned, endorphins directly and indirectly play a role in lifting our mood by activating dopaminergic signaling.

Dopamine, in turn, plays a huge role in this context due to activation of reward and gratification circuits.

And finally, as oxytocin and endorphin levels increase, our pain can be decreased.

It’s certainly no surprise that in good times and in bad, dogs bring us joy. But thanks to the well-researched and documented interplay between endorphins and dopamine, the door to animal-assisted therapy has been opened for both hospital patients and patients with post-traumatic stress. The video below is an example how critically ill patients benefit from animal-assisted therapy.

And it’s not just in the medical world. Everyone knows a pile of puppies just makes the world a better place.

During finals week, when stress is high, some colleges have special puppy events. If you take a moment to watch this video, many of you will feel an immediate mood change when puppies are introduced.

While using puppies and dogs during finals week may help reduce stress, our connection to dogs can also improve cognition.

Dopamine is well-recognized in neuropsychiatry as a facilitator of cognition and learning, and motivation towards achievement of goals.

Not to mention, the feelings of calmness and overall positivity that occur when levels of serotonin, oxytocin and endorphins increase.

And while our deep bond with our dogs provides major neurological benefits, there is an amazing chain reaction that results from this. Happy brains lead to happy organs, and happy organs lead to better health overall. Here is a sneak peek into the underlying mechanisms.

Our nervous system isn’t the only thing that benefits from our deep bond with dogs. Several studies suggest this relationship benefits us by lowering blood pressure, decreasing susceptibility to allergies and infections, improving blood vessel health, blood sugar homeostasis, and so much more.

The thing is, there is a very important mechanism at play where improved brain chemistry benefits all of our different systems and leads to better health.

The steroid hormone cortisol is a gold standard marker of stress in humans. Strong scientific evidence demonstrates that owning and interacting with our dogs may reduce our cortisol levels.

Interacting with our pets profoundly impacts levels of multiple brain chemicals such as oxytocin and structures like the hypothalamus and the pituitary.

In turn, the hypothalamus and pituitary areas of the brain regulate the adrenal cortex on top of the kidneys.

Together, this is known as the hypothalamus-pituitary-adrenal (HPA) axis, which constitutes a major neuroendocrine system in humans. And this is important because it is the HPA axis that regulates cortisol synthesis and secretion.

When we play with our dogs or even during animal-assisted therapy, scientist believe our HPA axis activity decreases as our oxytocin signal increases. Or, to put it simply, our bodies are producing less of the stress hormone cortisol.

Studies suggest that your pet dog may fine tune your HPA axis, which lowers cortisol secretion. Such events are considered general readouts for lower stress in the body, and thus have widespread health benefits. 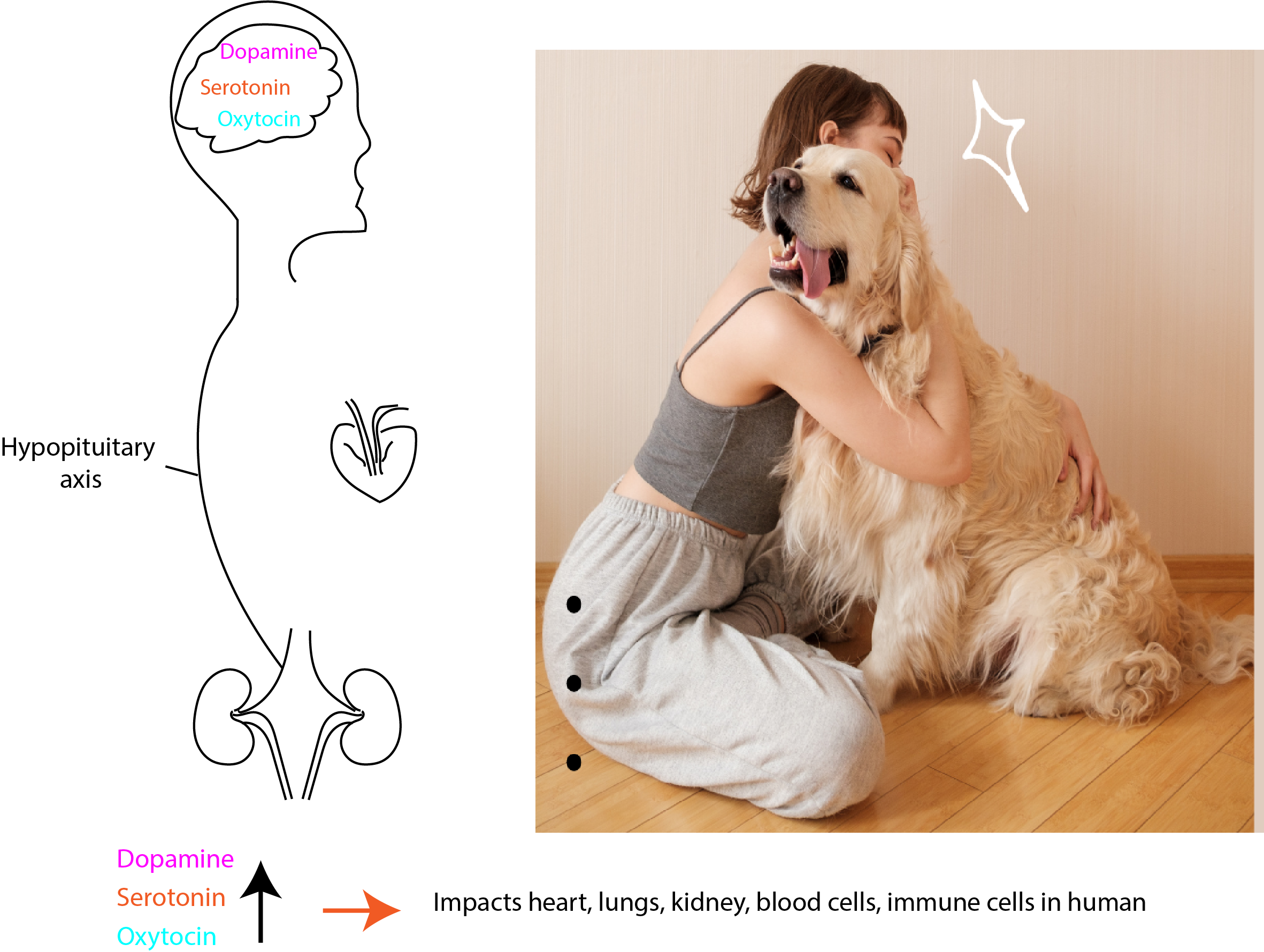 Figure 1. Elevated hormone levels in the human brain as a result of human-dog interaction have various physiological implications in the brain.

Even if you’re used to a high degree of stress, there are some consequences to all of that cortisol.

High levels of cortisol result in immune system dysregulation, which can wreak havoc on our arteries and veins. Chronic high cortisol concentration can also result in impaired memory and cognitive abilities.

When our body is in a state of constant stress response, marked by high cortisol concentration, abnormalities in our metabolism can occur. For example, dyslipidemia, diabetes, insulin resistance and ionic imbalance are commonly observed effects.

Many of these health effects are multifactorial. For example, when you have a dog, you likely go out for a run, or at least a daily walk with your pet. This increases your physical activity, and in turn your endorphin levels. Not to mention, physical activity confers widespread benefits to your cardiovascular and metabolic well-being.

Thus, as we see, it is not without reason that NIH has a dedicated Human-Animal Interaction Research Program. Further, NIH has funded strategic research partnerships to unravel the science behind these health benefits.

Such is the significance of pets, most notably dogs, in our well-being. So the next time your dog comes up with its cold nose and slobbering tongue, begging for your attention, give it a lot of love and petting. It might just be exactly what your body needs.

The Science Behind Our Dogs and Our Health
Indeed, the history of the human-canine bond dates back several millennia. Over centuries, the moder...
The Dog-Human Bond: We Wouldn’t Be Who We Are Without Them
As the old saying goes, the dog is indeed “man’s best friend.” Annals of history and folklore have...
Irresistible Puppy Eyes and Their Science
Sometimes an eyebrow raise is enough to melt our hearts. That is exactly what happens every day to m...
The Microbial World of Our Pets
Just like humans, our cats and dogs also have a gut microbiome. And just like us, their microbiome...