How to choose the right Agrobacterium vector for plant transformation

One of the key factors influencing an Agrobacterium-mediated gene transformation is the vector selection. However, sometimes you feel like you’re swimming in an ocean of vector options without really knowing which vector to choose, how to choose a specific vector and which criteria apply in making the selection.

No worries! This article provides you with information about how to select a suitable vector for Agrobacterium-mediated plant transfer. You will find in this article the Agrobacterium vector features, criteria to help with selection, advantages, disadvantages, and ease in cloning vectors.

What is an Agrobacterium vector?

In cloning, a vector is a DNA molecule used as a vehicle to artificially carry foreign genetic material into another cell, where it can be replicated and expressed.

A vector allows you to create transgenic organisms (not only plants) with improved traits (e.g., disease resistance) or to understand a gene or protein function.

More than thirty years ago, the concept of using Agrobacterium tumefaciens as a vector to create transgenic plants was viewed as a prospect and a "wish." However, today, many agricultural and horticultural important species are routinely transformed using this bacterium, and the list of Agrobacterium-mediated transformation susceptible species grows at an accelerated rate.

Researchers explored and understood the mechanism of how wild Agrobacterium strains transferred DNA into the plants. The Agrobacterium tumor-inducing plasmid or Ti-plasmid does the DNA transfer. A plasmid is a small extrachromosomal DNA molecule within the bacteria that is physically separated from the chromosomal DNA and can replicate independently.

Later, to use Agrobacterium as a "tool" for plant genetic engineering, scientists modified the transferred DNA or T-DNA region to avoid getting sick plants while introducing a gene of interest. 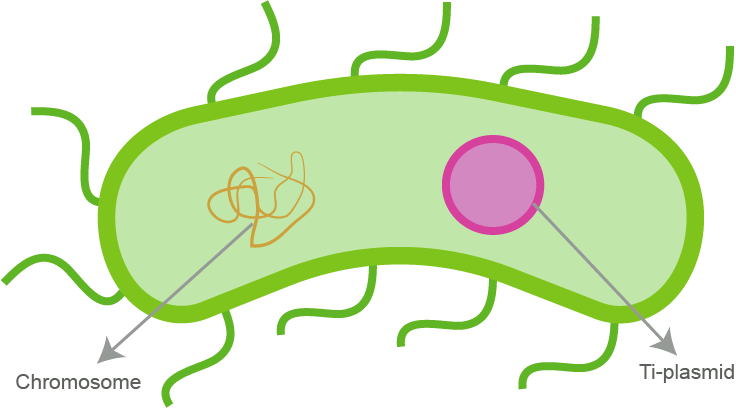 Figure 1. Components of the wild Agrobacterium.

Features of the different Agrobacterium vectors

The T-DNA is approximately 10 to 30 kbp in size (about 10% of the plasmid size). Some plasmids can contain more than one T-DNA region. Furthermore, the plasmid contains about 35 virulence genes responsible for processing the T-DNA and its subsequent export from the bacterium to the plant cell.

Most in vitro gene manipulation techniques use E. coli to increase the plasmid yield, as it is a fast-growing bacterium. Consequently, one advantage of working with binary Ti vectors is their capability to replicate in both E. coli and Agrobacterium.

Although the term binary vector literally refers to the entire system that consists of two replicons (DNA molecules), one for the T-DNA and the other for the virulence genes, the plasmid that carries the T-DNA is frequently called a binary vector. For convenience, I follow the literal definition of two plasmids to give more details to the reader.

A binary vector consists of two plasmids: a disarmed Ti plasmid carrying the T-DNA region and a helper plasmid containing the virulence genes.

Table 1. Components of the disarmed Ti-plasmid.

There are several virulence genes, named virA, virB, virC, etc., all producing different proteins that have different roles in the transfer of T-DNA from Agrobacterium to its host (Figure 2B). Below a chart describing the main functions performed for each gene.

Table 2. Description of the virulence genes functions in the Agrobacterium helper plasmid.

Figure 3. Components of the superbinary vector. S vir (in red) is the additional segment carrying virulence genes and it this differentiates with the binary vector.

The disarmed Ti plasmid is composed of the T-DNA region flanked by the RB and LB, an origin of replication (ori) for Agrobacterium (e.g., pVS1 or pRiA4) and another ori for E. coli (pUC) and a plant selectable marker (usually kanamycin).

The accessory virulence plasmid consists of an ori for Agrobacterium (e.g., pVS1 or pRiA4) and an ori for E. coli (pUC ori) and a bacterial selectable marker (spe, spectinomycin), and a large virulence region. 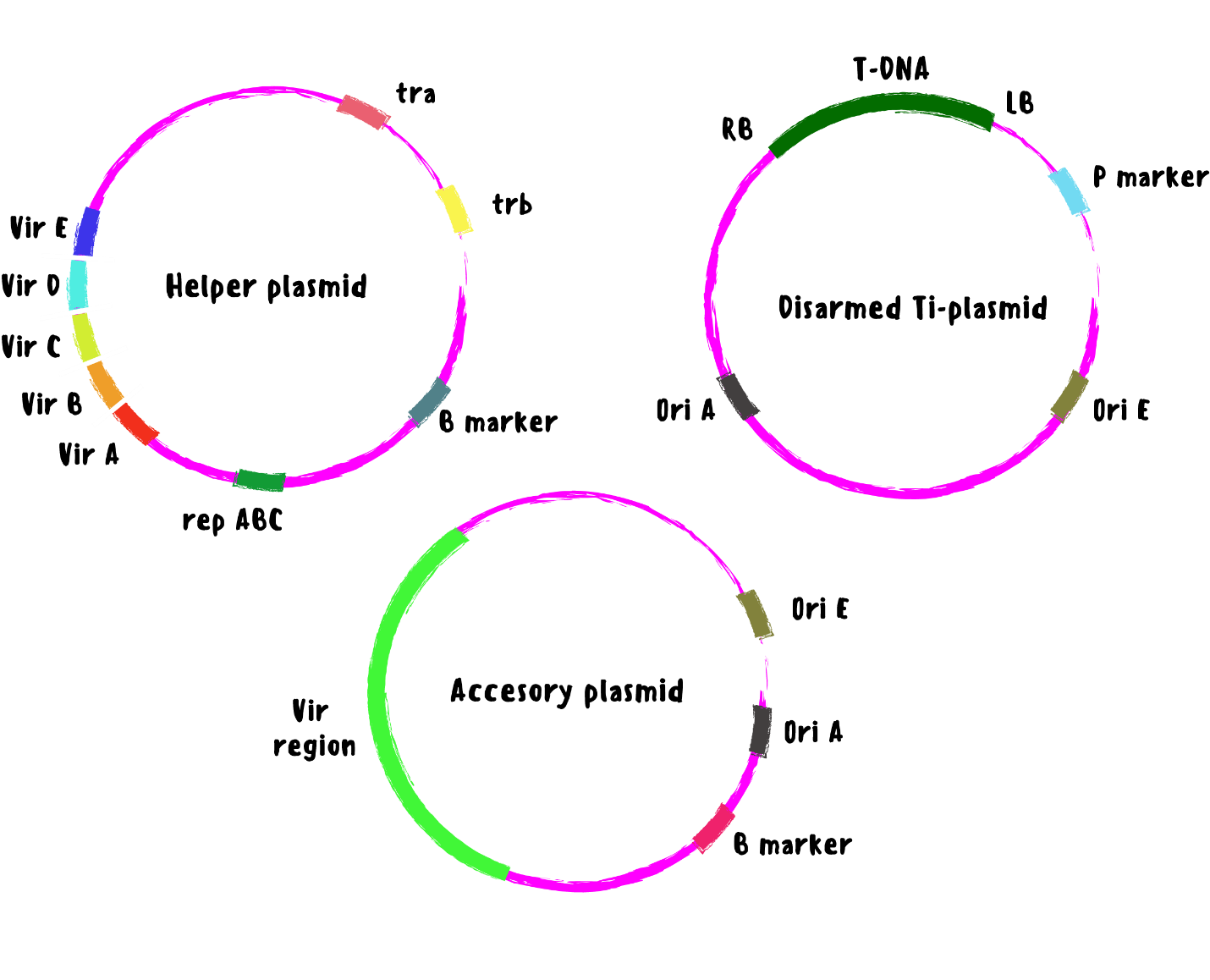 Figure 4. Components of the ternary vector. The accessory plasmid is the new component in the ternary vector and this differentiates with previous vectors. Tra/trb: transcriptional activators; rep ABC: ABC replication origin.

Table 3. Commonalities and differences between the Agrobacterium vectors.

How to choose an appropriate Agrobacterium vector for my protocol?

A wide range of Agrobacterium vectors are available now. Unfortunately, there is no vector that is good for all purposes, but many of the vectors currently available are quite versatile. No matter how difficult the choice is, you have to make a decision. Here I can provide you with some criteria to guide your vector selection.

Determine the genotype to work:

You should define if you are planning to work with dicots or monocots species. Within monocots, there are the cereals group. Within dicots, you have Arabidopsis and most of the fruit crops

Agrobacterium naturally infects dicots species. In this sense, specialized vectors (e.g., superbinary and ternary) were developed to cause intense infection in monocot plants, including rice, wheat, barley, and sorghum.

If you plan to produce transgenic plants stably, a selectable marker must be present in the disarmed Ti-plasmid.
Suppose you want to understand a gene or protein's function, a common approach in functional studies. In that case, a selectable marker is not necessary as you only wish to see the gene expression. The transgenic tissues can be differentiated using a fluorescent protein such as GUS, GFP, or LUC.
Some other vectors were designed for specific purposes, e.g., vectors for suppressing plant genes by RNA interference technology may also be chosen.

Revise literature regarding your target plant:

It is possible that your target plant already has an Agrobacterium transformation protocol reported. You can use this previous report as a base to start optimizing all the key factors influencing the Agrobacterium-mediated gene transformation.
For instance, a good review for commonly used binary and superbinary vectors in plant transformation is available in Komari et al. 2006.

Determine the size of your gene of interest to introduce:

Key criteria for delivery of transgene fragments smaller than 15 kb are (1) compatibility of selectable markers with the experiments and (2) availability of convenient cloning sites.
For delivering DNA fragments larger than 15 kb, the top consideration is whether the large DNA fragments can be cloned efficiently to the vectors and maintained stably in E. coli and A. tumefaciens. Large DNA pieces in certain vectors, e.g., high-copy number vectors, may sometimes cause low efficiency of transformation of bacteria or rearrangement of the inserts. If the DNA fragments are larger than 15 kb, IncP, BIBAC, and TAC vectors are recommended.

If you have access to different strains harboring different Ti plasmids, you can perform an infection test and quantify the infection efficiency.
For instance, Bakhsh et al. 2014 working with a dicot species like tobacco, evaluated five different strains (GV2260, LBA4404, AGL1, EHA105, and C58C1) where LBA4404 was selected as the best strain. For a monocot plant like wheat, McCormac et al. 1998 evaluated LBA4404 and EHA101 with the latter as the best strain.


You can calculate the infection efficiency by using our calculator here. 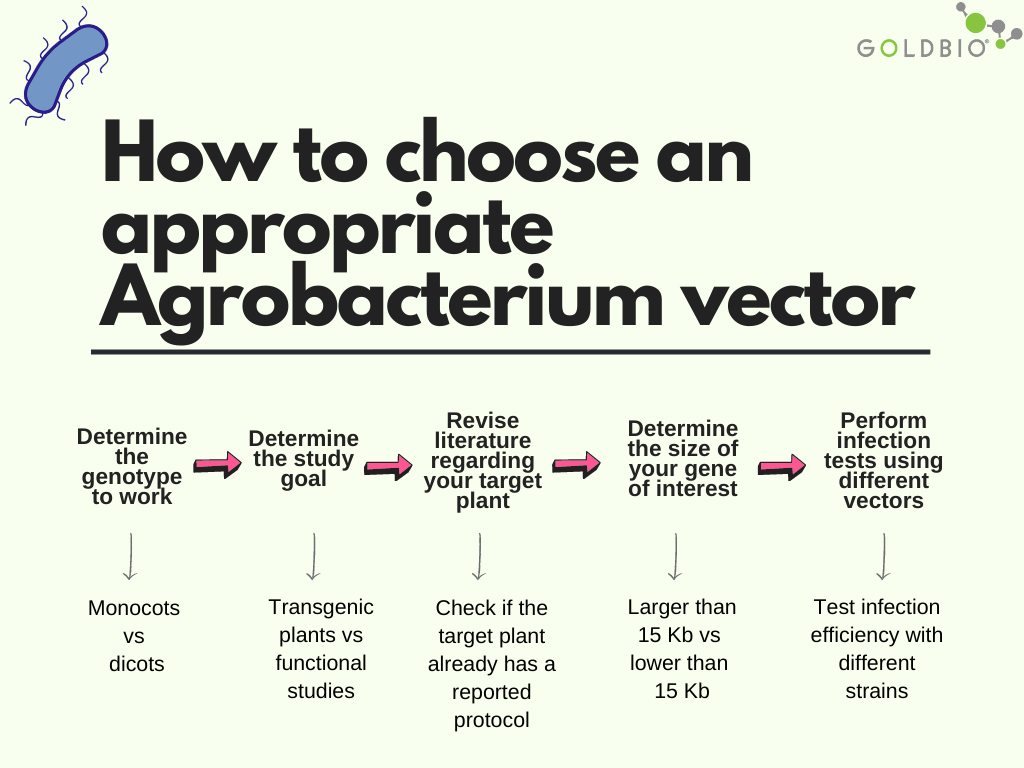 Advantages and disadvantages of the Agrobacterium vectors