Can You Reduce Pet Fights With Pheromone Plug-Ins?

The gate to the pet carrier opened, and out came Littles, not shy at all. She sniffed around corners and explored her new territory. Upon discovering the three other cats and a border collie, she took no time in establishing herself as the alpha in the household. 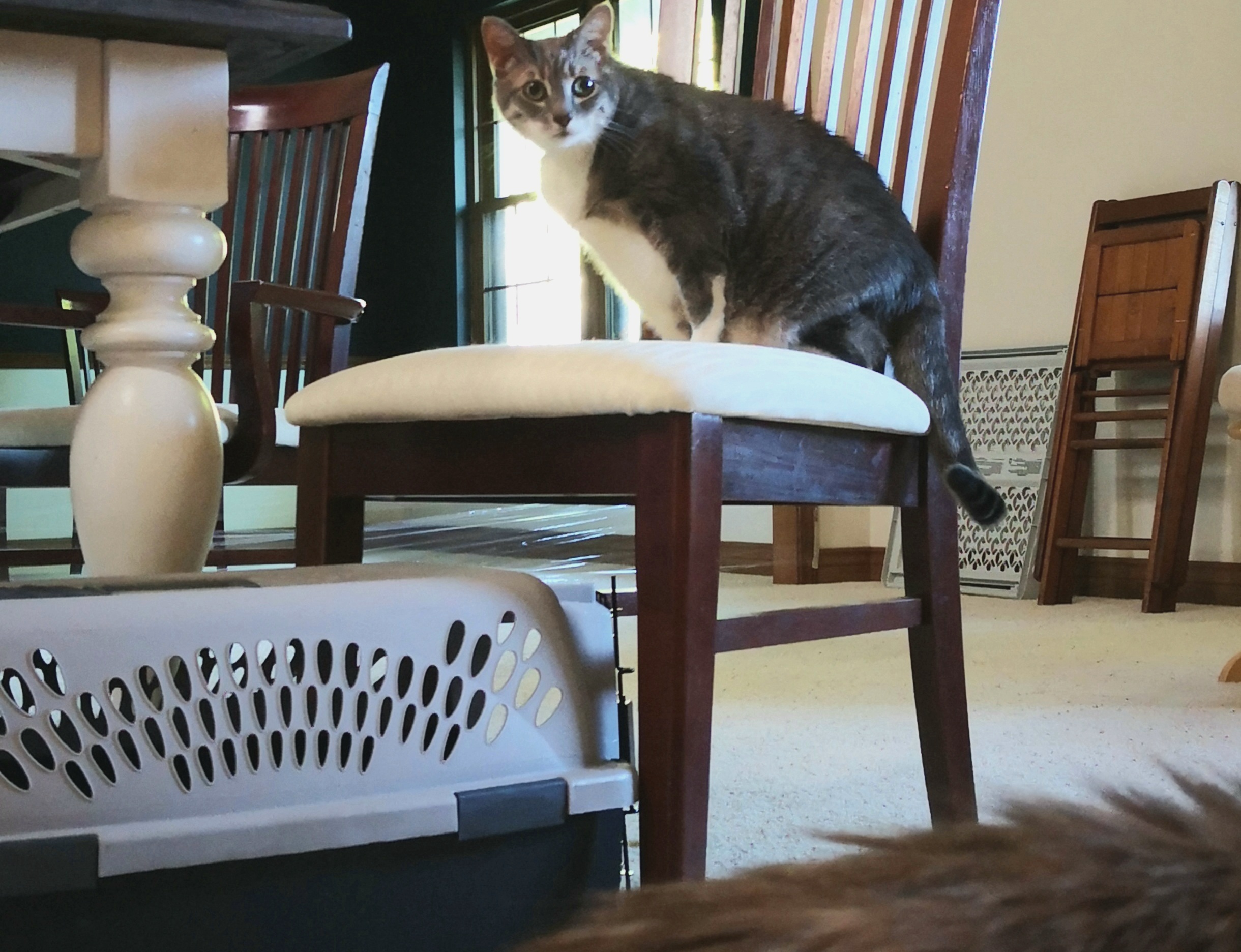 Image| Littles surveying her new home on high ground as another cat approaches. This photo is from her third home where she was introduced to two other cats, Xero and Puff. Once again, she established herself as the alpha cat in the blended household.

Surprisingly, she took to two of the cats, and the three formed a sort-of pride with a defined hierarchy. Littles was at the top, of course, then Mushi, and then Tinies. Together, the three widened their territory in the house, blocking another cat, Phoebe, from food and litter box access.

This was becoming quite a problem. And while Mushi and Tinies did not harass the border collie named Riley, Littles would swipe at her like a lynx.

If something wasn’t done quickly, the residents of the house felt Littles would have to go. To be clear, go meant either a shelter or a field – somewhere away from the house and the other pets within.

According to the ASPCA, 6.5 million U.S. cats and dogs enter a shelter each year, and pet problems is the largest cited reason.

Pet problems include aggressive behavior and problematic behavior, as well as growing bigger than the owners expected or the owner having health problems.

Some of you have maybe experienced the heartbreak of pet surrender. You go into multi-pet ownership wanting companionship and to help an animal in need of care, only to discover some unexpected consequences in a blended family.

Aggressive behavior such as Littles’s swiping at the dog can sometimes be remedied by time, patience, and good training from a professional or licensed behaviorist.

However, that route can get costly and involve a lot of trial and error. That’s not to say that route shouldn’t be investigated when pet owners are facing these challenges, but the expense particularly can sometimes be a dealbreaker. Time can be another problem since a good behaviorist can take months to book, and reducing at least some of the aggression needs to happen sooner.

So is there something that can be done to quickly minimize aggression and hostility in multi-pet households?

There might be some promise in pheromone diffusers. These diffusers work like scented plug-in products, where a cartridge of the product in liquid form is attached to a heating component that is plugged into your outlet. The pheromones, which in mammals are detected through the olfactory system, diffuse into the air.

Yes, after mentioning that, it’s only natural for a healthy skepticism to creep up. But a pilot study found some significant results in lowering hostility and tension using either ADAPTILTM or Feliway FriendsTM in cat-dog households.

Different pheromones have different actions, which can be categorized as either primers or releasers. Primers bring about changes in the physiology of the recipient. Releasers cause a change in behavior of the recipient.

Because appeasing pheromones induce a calming behavioral influence in both young and adult mammals, they would fall under the releaser category (Pageat & Gaultier, 2003).

In nature, appeasing pheromones are produced by lactating dogs and cats. They are believed to reassure puppies and kittens of safety as well as defining safe areas to explore (Prior & Mills, 2020). One of the biggest advantages of the pheromone is the secure, calm feelings they induce in offspring.

At their core, the appeasing pheromones in different studied mammals are composed of the same three fatty acids (oleic acid, palmitic acid and linoleic acid) in the same ratio. However, other components such as myristic acid in varying ratios are believed to be the species-specific part of the pheromone (Pageat & Gaultier, 2003).

For example, Patrick Pageat pointed out in his paper “Current research in canine and feline pheromones” the order of these species-specific components in dogs and cats, which are shown in Table 1 below (2003).

Pageat mentioned that because pentadecanoic acid is a missing component of the cat appeasing pheromone, the other components appear in different ratios.

The idea behind commercial production of synthetic versions of these pheromones is that they may bring about a sense of calmness and safety in other environments such as households and veterinary offices. This hypothesis has led many researchers to conduct efficacy studies with cats and dogs in different circumstances.

Do products like ADAPTILTM and Feliway FriendsTM work in reducing pet aggression?

There are several papers evaluating how well synthetic pheromones like ADAPTILTM and Feliway FriendsTM work. These studies look at the effects of these products on sheltered animals, pets in kennels, thunder and fireworks affecting pets, vet visits, etc.

But researchers at the University of Lincoln in the United Kingdom conducted a recent study that looked at whether one product or the other was better at minimizing aggression in cat-dog households.

Researchers Miriam Prior and Daniel Mills determined from this study that both synthetic pheromones almost equally and significantly improved cat-dog relationships. This is an interesting result, considering these pheromones have species specific components.

But obviously there are some questions. For instance, how long did it take before improvement was observed? How were they able to determine that it improved relationships? Could this have been a placebo effect?

How long until improvement was seen:

Results of the study were reported at a 2-week mark and a 6-week mark (end of study). And it should be no surprise that it took time before results were seen. At the end of their study, which was the 6-week mark, Prior and Mills observed the greatest improvement of behavior.

To be more specific, what they observed is that in almost half of each participant group (half of the FeliwayTM and almost half of the ADAPTILTM) there was about a 50% reduction in undesirable behavior scores.

Furthermore, in about 70% of each group, researchers found a 30% increase in desirable behavior such as friendly greetings or being comfortable in the same room together.

This study followed 34 participants (36 in the beginning but ending and reported on 34), 17 used ADAPTILTM and the other 17 used Feliway FriendsTM. Participants reported regularly on the following 10 undesirable behaviors:

But is this just a placebo effect?

Could these results be attributed to the pet owners’ knowledge that they’re receiving a potential treatment for the cat-dog relationship, thus potentially influencing the results of the study – a sort of placebo effect?

This question definitely is valid, especially because both synthetic pheromone products performed almost equally well. Prior and Mills wrote that this could either be because of a placebo effect or because both are equally effective.

They suggested this same test be ran against a placebo. However, they also noted that the results seen in their study were higher than what would be expected for a placebo.

They also took care to keep the study objective in terms of listing and having scoring and reporting instructions for desirable and undesirable behaviors.

Another reason they would not attribute their results entirely to placebo is that there was a significant difference between cat and dog relaxation scores between the two different products.

But rather than taking one study’s word for it, there was another study that compared multi-cat households and the effectiveness of Feliway FriendsTM to placebo.

Like Prior’s study, this study looked at very specific behaviors, having participants report regularly using defined metrics as well as in a focus group facilitated by a veterinarian behaviorist.

When the pheromone and placebo diffusers were removed 28 days into the study, researchers continued to evaluate results for two more weeks. What they discovered was that in households with placebo, undesired behavior began to increase. But in households with Feliway FriendsTM, undesirable behavior remained low and stable by comparison.

DePorter’s research found the most significant improvements happened at day 21, while Prior’s study found the best results after 6 weeks.

Despite these differences, what we can summarize is that the most impactful results do not occur overnight. They don’t even occur after a week.

Based on their research, it might take about a month or a little longer to see the best results. And results will still vary from household to household.

But with all of this, there is something else to consider, and that’s all of the other factors that influence animal behavior, particularly stress and anxiety. For instance, the size of the house, conditions of the home, whether or not children are present could all be factors. In a kennel or shelter environment, the number of animals, the amount of noise, the amount of space, the amount of smells could also factor into the equation.

What we can ultimately determine from these studies is that there appears to be potential for synthetic cat and dog appeasing pheromones to positively influence behavior. This influence takes time for real results to be seen. And pheromones alone are not the only contributor to animal temperament.

Littles was introduced into the blended family when the residents’ daughter (Little’s pet owner) moved back temporarily. Unfortunately, at the time, there were no commercially available appeasing pheromones. However, time resolved some of the worst issues, as well as blocking off safe spaces for Phoebe and Riley.

Finally, things were fully resolved when Littles and her owner moved into a new apartment. In time, Littles would be introduced into another blended family when her companion was married. And like the situation before, Littles established herself as the alpha, took to the other beta cat, and asserted herself over the original household alpha cat.

Time, patience and a lot of love healed much of the tension within the household, and a healthy balance developed between all three pets.

Image| Littles and Puff watching birds together. Puff was less dominant, and Littles got along better with him.

DePorter, T. L., Bledsoe, D. L., Beck, A., & Ollivier, E. (2019). Evaluation of the efficacy of an appeasing pheromone diffuser product vs placebo for management of feline aggression in multi-cat households: a pilot study. Journal of feline medicine and surgery, 21(4), 293-305.

Can You Reduce Pet Fights With Pheromone Plug-Ins?
The gate to the pet carrier opened, and out came Littles, not shy at all. She sniffed around corners...
The Microbial World of Our Pets
Just like humans, our cats and dogs also have a gut microbiome. And just like us, their microbiome...
Cat Allergy Vaccine, Will It Be As Good As They Say?
You’ve got a cat or few. They love snuggles and cuddles. They’re super warm and soft and perfect. Li...
The Dog-Human Bond: We Wouldn’t Be Who We Are Without Them
As the old saying goes, the dog is indeed “man’s best friend.” Annals of history and folklore have...