A transformed bacterium harbors a plasmid containing a reporter marker, such as an antibiotic-resistant or lacZ gene, allowing it to form a colony. The plasmid also carries a gene of interest which can be produced massively in vitro when the colonies are formed.

In a transformation process there are three steps: 1) Ligation, 2) Transformation and 3) Bacterial selection.

Through this article you will see a quick overview of the transformation process and the common methods for bacterial selection. Furthermore, a glossary of terms related with transformation is presented.

Detailed molecular studies on the function and structure of a gene require large amounts of small DNA fragments like genes in a purified way, meaning the gene is isolated from the DNA pool where it originated.

A plasmid is a small, extrachromosomal DNA sequence that can replicate independently.

A plasmid is composed of a T-DNA region where the gene of interest is placed, an origin of replication (ORI) which allows the plasmid be replicated and a reporter marker like antibiotic-resistant gene. 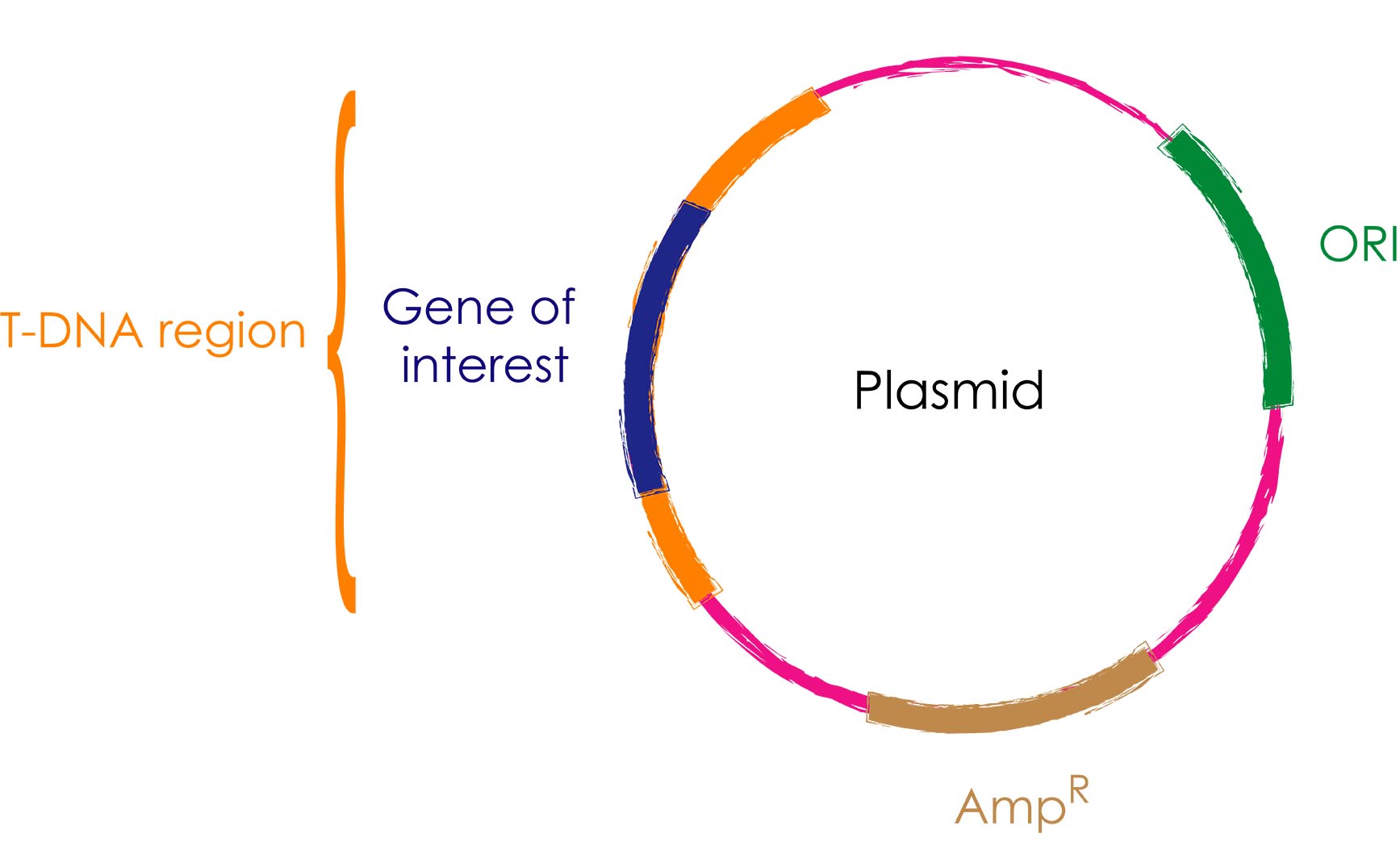 Transformation is a process in which bacteria are treated to be permeable and intake foreign DNA of a gene of interest using a plasmid as a vector.

Then, as bacteria grow, large amounts of our gene of interest are produced and therefore can be better studied.

The main steps in a transformation process are:

In the ligation step, the gene is first isolated from the pool of DNA and then connected with the plasmid through action of DNA ligases creating a recombinant plasmid.

After treatment with restriction enzymes, our gene (or genes) of interest is inserted into a plasmid with the help of ligase enzymes.

Figure 3. The gene of interest is inserted into a plasmid with the enzyme ligase.

In the transformation step, competent cells are treated to make them more permeable in order for the plasmid containing the gene of interest to be introduced.

A competent cell is a cell that is made permeable so that foreign DNA can be introduced into it. Examples of cells that researchers make into competent cells include E. coli and Agrobacterium tumefaciens.

Generally, the plasmid with the gene of interest is incubated in a solution with competent cells. Later, the combined solution is exposed to a transformation method, such as heat/cold shock or electroporation, to promote plasmid insertion within the competent cells.

Figure 4. Represents the fact that some cells will take up the intended plasmid while others might not.

Finally, the bacterial selection step consists of identifying and separating the competent cells with the inserted plasmid and gene of interest (transformants) from those that did not.

When performing transformation where you’re trying to introduce your gene of interest into a cell, not every cell will be successfully transformed. This is why bacterial selection is so important. We need to make sure that enough of our cells were transformed, and work with them in downstream processes.

Let‘s take a closer look at the two common methods for bacterial selection.

Transformed bacteria can be identified using antibiotic-resistance or lacZ reporter genes. These two processes each have different approaches and outcomes, and can sometimes be used in combination with each other.

The resistance gene is specific to certain antibiotics. Researchers can choose genes specific to ampicillin, hygromycin, kanamycin, and streptomycin.

Figure 5. Bacterium with plasmid carrying antibiotic resistance will be able to grow colonies on a plate that has the specific antibiotic that the bacterium is resistant for.

Consequently, those cells that were not successfully transformed will not grow because the antibiotic will kill them.

This way, competent cells with the plasmid harboring the antibiotic-resistant gene may be selected through the growth of the cells in plates containing such antibiotics. This method is called bacterial selection of antibiotic resistance.

The second method of bacterial selection uses the lacZ gene as a reporter marker. This alternative method is sometimes preferred because it avoids using antibiotics in later stages.

There is a concern with using antibiotics in transformation because it may lead to antibiotic resistance in the transformants.

Naturally, the LacZ gene codifies a β-galactosidase, breaking down the lactose in glucose and galactose.

In a transformation process, the lactose is replaced by X-Gal (abbrev for 5-bromo-4-chloro-3-indolyl-β-D-galactopyranoside), an analog of lactose. When X-Gal is broken down by lacZ, it turns the colony blue.

Therefore, only the competent cells which have the plasmid containing the LacZ gene will appear blue on the selection plate containing X-gal. The rest of the cell will appear white to the naked eye.

When I was in college, I took a recombinant DNA class. There my teacher showed us how to combine both methods. First, we did blue-white screening to confirm that the plasmid had the gene of interest. Then we did antibiotic selection to make sure the cell had the plasmid.

In this way these two methods are often used alongside each other to confirm transformed bacteria.

The process in which a competent cell is made permeable in order to take up foreign DNA.

A cell without inserted foreign DNA after a transformation process.

A plasmid is a small, extrachromosomal DNA molecule within the bacterium that is physically separated from chromosomal DNA and can replicate independently.

A cell product of the multiplication of an initially transformed cell.

DNA fragment with a modified T-DNA region having a foreign gene of interest.

A cell that has successfully taken up foreign DNA after a transformation process.

Reverse Transcriptase & cDNA Overview & Applications
Reverse transcription is a technique used by researchers to generate a complementary strand of DNA...
Overview of Bacterial Selection & Antibiotic Resistance
Bacterial selection is the ability to differentiate between bacteria that successfully grew on selec...
How to Choose Agarose Resins for Protein Purification
Purifying a target protein is an important step before investigating its structure and function. To...
How to Troubleshoot Restriction Enzyme Based Cloning Problems
Since the early 1970s, restriction enzymes have become an important part of cloning and many other a...