The 4 Key factors influencing the in vitro plant regeneration

As a long-term plant scientist, I have discovered four important factors that influence in vitro plant regeneration: plant material, and explant selection, modulation of components in culture media, and modifications of culture conditions. Furthermore, the plant regeneration process generates different responses in the plant material. Both topics will be covered in this article.

Plant regeneration is an important step usually applied after Agrobacterium-mediated transformation. It allows the production of whole transgenic plants harboring desirable traits like resistance to diseases. Furthermore, a regeneration protocol can be started for other goals like metabolites production or micropropagation without needing an initial transformation step.

The totipotency principle is used to regenerate plants in vitro. In biotechnology, in vitro plant regeneration is a process in which explants (tissue portions) undergo cell division and differentiation and then form organs and tissues throughout their growth period (Bidabadi et al., 2020).

The totipotent ability of plant cells is widely used in several basic studies such as in micropropagation, germplasm conservation, and formation of genetically modified plants. 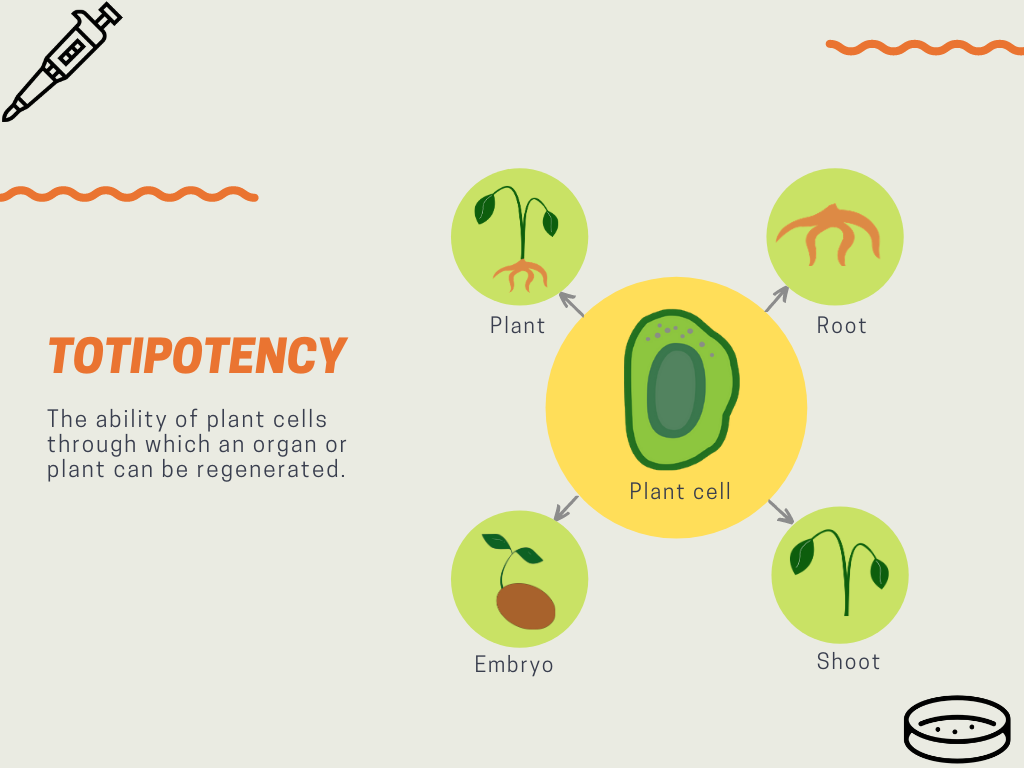 Why is in vitro plant regeneration important?

Scientists thought the ability to regenerate whole plants from selected or genetically altered cells or tissues could have great biotechnological potential in plant cell cultures to produce transgenic plants.

In vitro plant regeneration has long been used commercially to propagate and produce certain cultures when seed material is difficult to manipulate, such as:

Later, the potential for plant regeneration was broadly applied to propagate clones, cuttings, and grafts, as the base in research and agricultural applications. However, it is worth mentioning that the capability of plant regeneration varies significantly in different genotypes.

Ways to regenerate a plant in vitro: Organogenesis vs. embryogenesis

In vitro plant regeneration can be performed via somatic embryogenesis or organogenesis.

Organogenesis is the process by which new organs and even whole plants are usually formed in response to wounds in the explant.

In vitro plant regeneration by organogenesis results in organ formation through differentiated cells becoming less specialized and returning to an earlier cell state within the same lineage. This process is also known as dedifferentiation. Later, the reorganization of cell division creates particular organ primordia and meristems after the vascular connection between the explant and the newly regenerated organ.

When organs are formed directly without an intermediate callus (mass of undifferentiated plant cells) stage, this process is called direct organogenesis, and by contrast, when callus is formed, it is named indirect organogenesis.

Somatic embryogenesis is one of the biotechnological techniques for the multiplication of important economic cultivars.

This process is a type of plant cell totipotency in which embryos arise from somatic or vegetative cells without sexual fertilization. In somatic embryogenesis, a structural cell similar to zygotic embryos is formed, and then the entire plant is regenerated. Somatic embryogenesis could be well suited for the mass propagation of endangered crop species and commercial production.

Like organogenesis, the presence and absence of a callus stage determines the indirect and direct somatic embryogenesis. 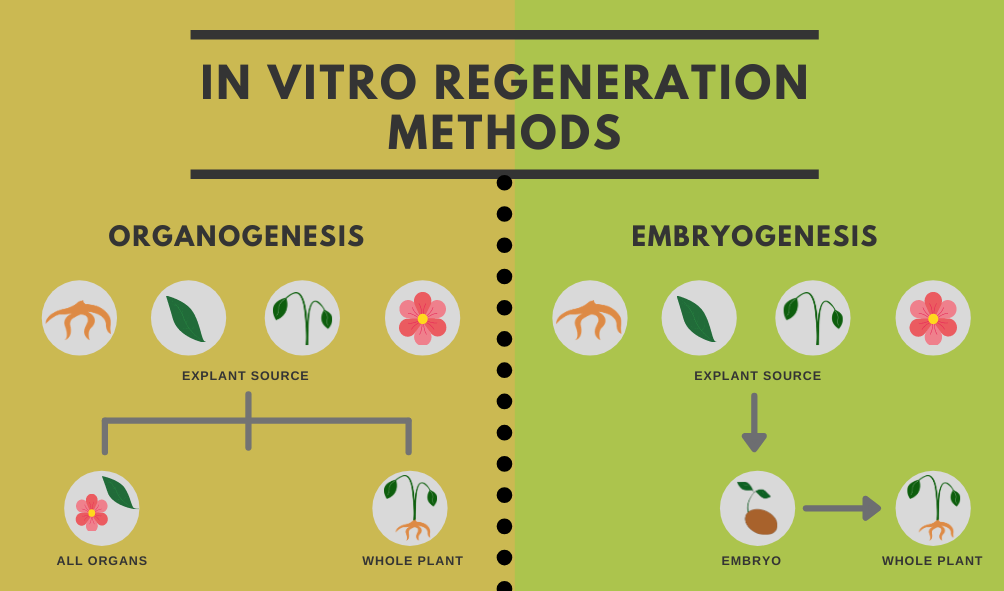 The plant material, explant selection, the modulation of components in the culture media, and modifications of the culture conditions have been studied to optimize the in vitro plant regeneration by organogenesis or embryogenesis.

The plant material should meet the next three preconditions to be used for in vitro regeneration.

For instance, while explants from the lower part of the tobacco shoot form 100% vegetative buds, those from the next zone upwards form 25% buds, which develop into flowering shoots (Endress, 1994). 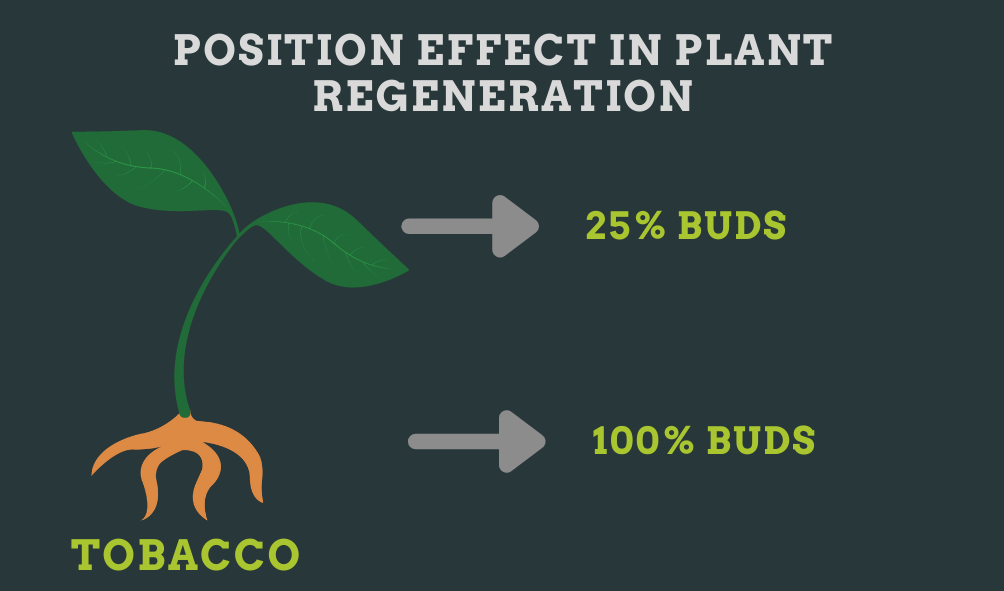 Different types of explants, such as leaf explants, root explants, glandular trichomes, or haploid cells (resulting from cell meiosis of both male and female gametophyte) and stomatal guard cells have been reported to regenerate into somatic embryos, organs, and whole plants (Bidabadi et al. 2020).

Modulation of Components in Culture Media

In culture media, the plant growth regulators or supplied hormones are fundamental to induce in vitro regeneration, and most of the studies are devoted to optimizing the hormones.

A single hormone may induce different effects on the same tissue in different species or developmental stages (dose-effect relationship). Furthermore, particular effects are not limited to particular groups of hormones. For example, auxins stimulate organogenesis, but in some cases, gibberellins can do the same. Also, exogenous addition of cytokinins generally is unnecessary for bud initiation in monocotyledonous; they may even act as inhibitors, whereas in dicotyledonous, they stimulate bud initiation.

Other components to optimize include the carbon source (sugars like sucrose or glucose) and mineral composition of salt mixtures (e.g., MS, WPM, DKW culture media). You can find more information about plant tissue culture media in our GoldBio article here.

Another aspect is the use of liquid or solid culture media for plant regeneration. The homogeneous dispersion of nutrients and better uptake of medium constitutes by the explants is one of the advantages of liquid culture. Subsequently, this causes further growth of the cultures in a suitable bioreactor system. However, among the drawbacks of liquid culture is hyperhydricity (tissues with elevated water content) as this usually leads to the production of abnormal plants.

Nontraditional inducers such as some amino acids and some antibiotics, for example, cefotaxime, have also been reported to affect in vitro plant regeneration (Bidabadi et al. 2020).

One of the well-studied conditions for plant regeneration is light. Light affects the activity of genes and enzymes, as well as explant growth. Light intensity and quality have been tested using various light sources such as high-pressure sodium or fluorescent lamp and light-emitting diodes (LED's) in in vitro cultures.

Other evaluated conditions include weak electric current and culture passages. The latter has an essential function in avoiding the loss of the morphogenetic potential (Rathore and Goldsworthy, 1985).

It is necessary to subculture periodically on a fresh medium for maintaining growth. However, repeated subculture cycles of callus could reduce its regenerative capacity. Therefore, optimization of subculture period is essential in order to obtain higher callus biomass with regenerative potency. For instance, the evaluation of the subculture cycle was reported for Chlorophytum borivilianum, an important medicinal plant. The authors reported a significant increase in the growth and development of callus however the morphology in all calluses remained the same (Nakasha et al 2016). 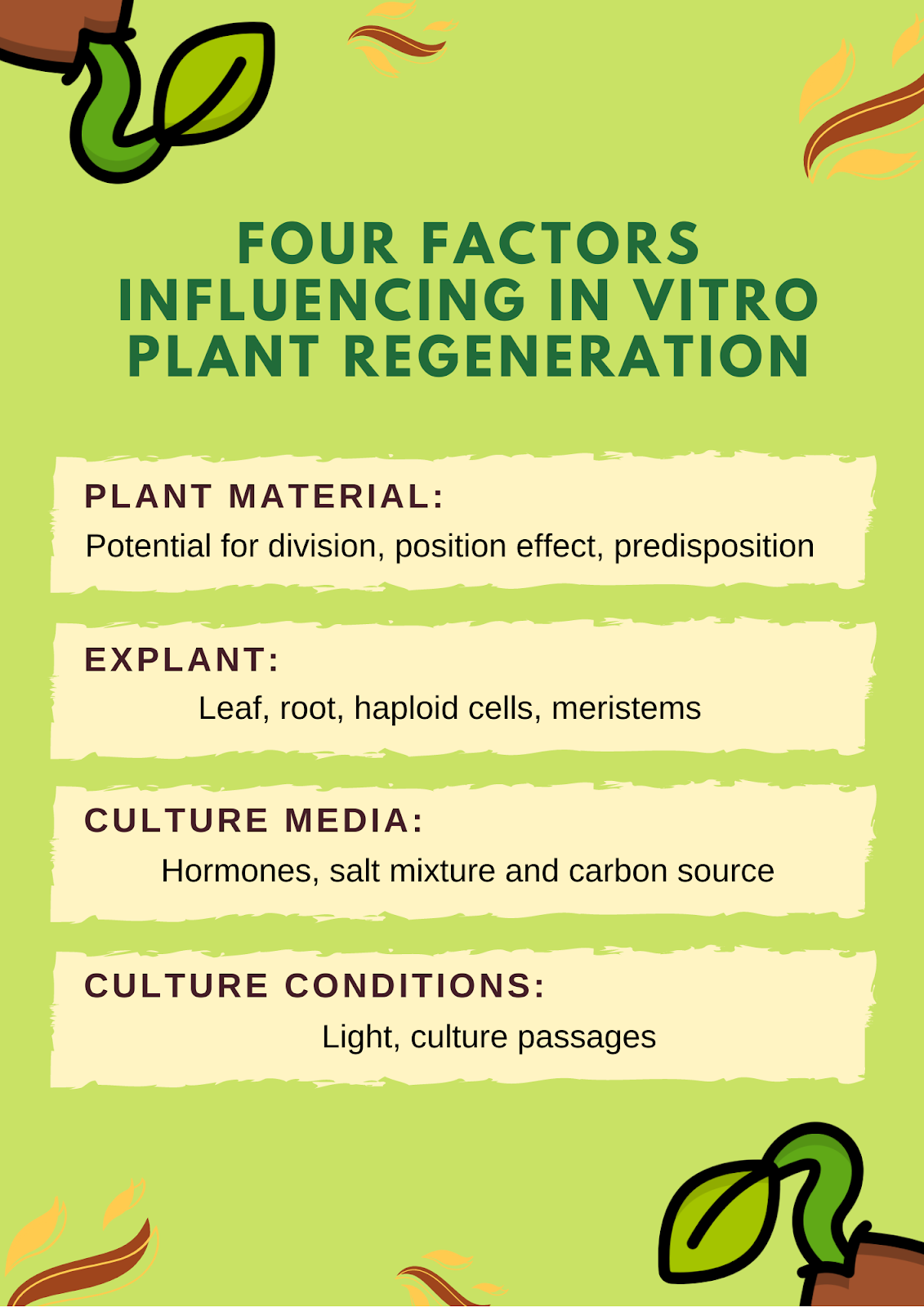 Positive and negative effects of the in vitro plant regeneration

Plant regeneration takes place in three stages. In the first stage, plant tissue responds to embryogenesis or organogenesis stimuli in a process called dedifferentiation. In the next step, it enters the induction phase, during which cells are identified to produce shoot, root, or embryo. The third step enters the realization stage, which results in the appearance of shoots, roots, and embryos. 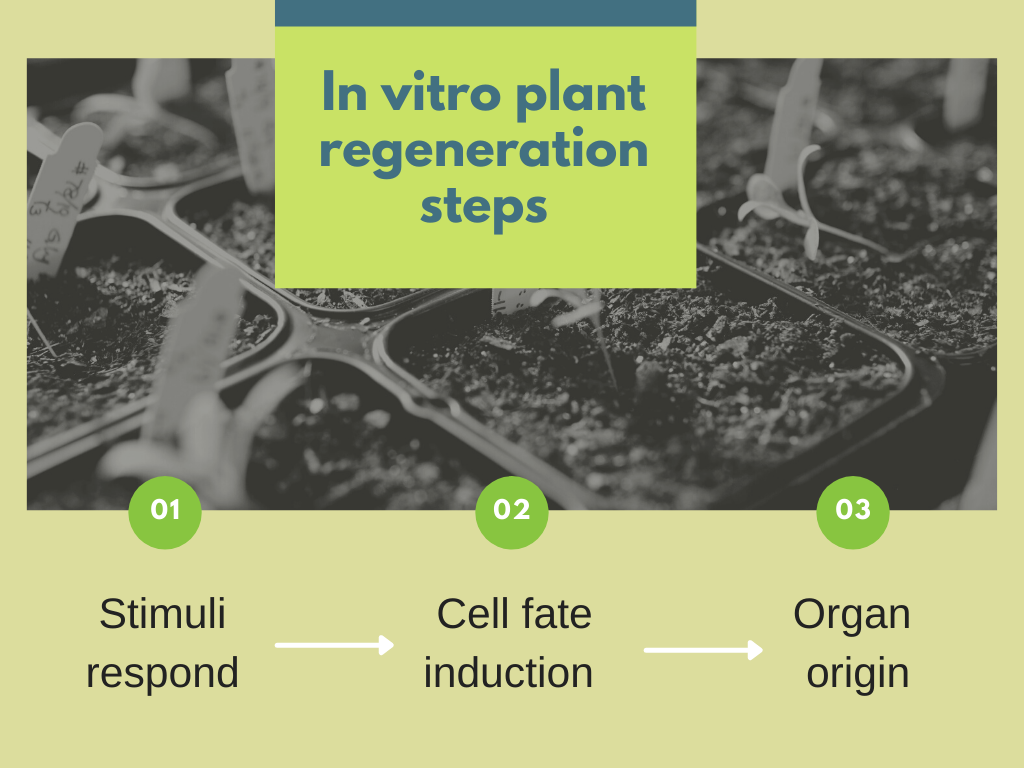 As a consequence of this three-stage process, we can have the following effects in in vitro plant regeneration:

This is the ideal stage. It requires an optimization of the above-mentioned key factors. Usually, previously reported articles for a target plant species could speed up the in vitro regeneration process.

It is the genetic variation induced in plant regeneration. Usually, it is undesirable to propagate true-to-type plants from a selected genotype. However, for plant crops that are difficult to breed or have an insufficient genetic basis, somaclonal variation can be advantageous as a breeding option.

Different factors are essential, causing many variations in the plant regeneration process. Such factors are:

Among the ways to reduce the somaclonal variation are:

The main difficulty in plant regeneration is the large number of abnormalities of regenerated shoots and embryos that cannot be converted to normal plants.

The signs of abnormalities are often characterized by a weak photosynthetic efficiency, poor stomata performance, and a significant decrease in cuticle wax.

For instance, hyperhydrated tissues are formed as a consequence of culturing in liquid media, even in solid culture media. The critical factor was found to be the relatively high humidity of the air in closed culture containers. Optimizing the relative humidity is essential to expand an efficient plant regeneration protocol.

See our catalog in the link Plant Research and Reagents .

What Are Plant Growth Regulators - A Detailed Introduction to PGRs
Plant growth regulators are important compounds that impact aspects of plant growth such as root, sh...