This article gives you quick answers to some very common questions when working with Nourseothricin sulfate (clonNAT).

Below is a clickable list of the top compiled questions as well as detailed answers to each one.

Take a look, and save time in your daily work.

4.Is nourseothricin bacteriostatic or bactericidal?

5.What are all the different names of Nourseothricin

6.What is the structure of nourseothricin?

7.What are the resistance genes for nourseothricin?

9.What kind of antibiotic is nourseothricin

10.What bacteria is nourseothricin effective against

12.Is nourseothricin a good antibiotic for cell culture?

13.What is the difference between nourseothricin and other commonly used antibiotics?

14.What are the major uses of nourseothricin in biotechnology?

15.How do you make a nourseothricin stock solution?

Additionally, nourseothricin binds to the ribosomal subunit of bacteria. This causes an incorrect alignment of the mRNA and eventually produces a misread that causes the wrong amino acid to be placed into the peptide chain.

Consequently, a nonfunctional protein is produced. Abnormal proteins accumulate within the bacteria leading to cell death.

It has been reported that streptothricin F causes errors in reading the genetic message.

In polypeptide synthesis directed by homopolynucleotides (regulatory elements at various stages of mRNAs life cycle), streptothricin F stimulates the ribosome into incorporating the wrong amino acid during the translation process.

These organisms require a stable and reliable antibiotic to be tested for long-term. Nourseothricin (clonNAT) retains > 90% activity after one week under cultivation conditions.

The enzyme acetyl coenzyme A: streptothricin acetyltransferase (ACSAT for short) inactivates nourseothricin by acetylating the β-amino group (C16) of the β-lysine residue in the molecule, causing a reduction of the antibiotic activity (Hahn, 1983).

Nourseothricin is a mixture of streptothricins D, F, C and E. The acetyltransferase synthesized by Streptomyces laoendulae acetylates streptothricin F at the β-amino group (C16) of the β-lysine residue, protecting the strain against its own antibiotic product (Ziihringer et al 1993).

4. Is nourseothricin bacteriostatic or bactericidal?

Nourseothricin is bacteriostatic and bactericidal, meaning it arrests the bacterial growth and causes cell death. The antibiotic effects of nourseothricin could be associated with its mechanisms of action inhibiting protein synthesis through the mRNA translocation interference and RNA misreads.

Furthermore, the diversity of the streptothricins C, D E and F composing nourseothricin could explain its versatility acting as both bactericidal and bacteriostatic, however the complete mechanism is not well understood.

There is a deeper difference between bacteriostatic and bactericidal antibiotics that depends on their concentrations and the effect over bacteria.

Before explaining the difference, there are two important terms to understand.

MIC indicates the lowest level of antimicrobial agent that greatly inhibits growth, and it is physically visualized as a tube with very low turbidity.

What we mean by this is if you plate an aliquot from this tube, you will be able to visualize some bacterial growth.

MBC, on the other hand, indicates the lowest level of antimicrobial agent resulting in microbial death and it is physically visualized as a tube with no turbidity. If you plate an aliquot from this tube, you won’t see bacterial growth.

Examples of bacteriostatic antibiotics include chloramphenicol, clindamycin, and linezolid.

A study reported by (Dickler et al 2017) analyzed 56 trials that compared bacteriostatic with bactericidal, and authors showed that the majority of trials across a variety of infections found no difference in efficacy between bacteriostatic versus bactericidal agents.

5. What are all the different names of Nourseothricin

6. What is the structure of nourseothricin?

The structure of nourseothricin has three moieties:

The β-lysine homopolymer chain differs in the number of β-lysine residues from one to seven and giving rise to the different types of streptothricin from A-F and X.

7. What are the resistance genes for nourseothricin?

The sat4 gene has been reported to belong to a gene cluster with other aminoglycoside resistance genes like aphA-3 and aadE which improve the bacterial resistance to nourseothricin (Derbise et al 1996; Wendlandt et al 2013).

9. What kind of antibiotic is nourseothricin?

The mechanism of action for aminoglycoside antibiotics involves a two-step process. In the first step, a self-promoted uptake involves the displacement of divalent cations such as magnesium and calcium from outer and inner membranes.

Without these cations, the outer and inner membranes become more permeable. This in turn, elevates the antibiotic uptake.

After crossing both membrane barriers, the antibiotic enters the cytoplasm and targets the ribosome.

In a second step, the aminoglycoside antibiotic binds to the A-site on the 16S RNA of the 30S bacterial ribosome hindering the normal translation process, which leads to mistranslated proteins in the cytoplasm. The accumulation of abnormal proteins accelerates cell death.

Nourseothricin is considered an aminoglycoside antibiotic because it also inhibits protein synthesis by interfering with the translation process and causes misreading of RNA molecules.

However, nourseothricin does not have the typical aminoglycoside structure core of the dibasic aminocyclitol ring (commonly 2-deoxystreptamine). Instead, the lysine residue is responsible for the antibiotic effect.

10. What bacteria is nourseothricin effective against?

12. Is nourseothricin a good antibiotic for cell culture?

Nourseothricin is used for cell culture in the selection of genetically modified plants, fungi, yeast, and bacteria.

Nourseothricin is not used for antibiotic therapy with animals or humans because of its nephrotoxicity or toxicity of the kidney.

13. What is the difference between nourseothricin and other commonly used antibiotics? 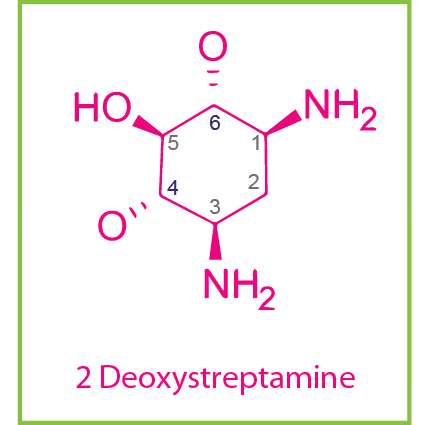 14. What are the major uses of nourseothricin in biotechnology?

Nourseothricin is commonly used for bacterial and plant selection. It is not used in animal or human experiments because of its toxicity to kidneys (nephrotoxicity).

15. How do you make a nourseothricin stock solution?

5. Prepare aliquots of 1ml each.

Although there are not many studies, nourseothricin is toxic above 60.000 units/kgm administered intravenously into mice (Robinson et al. 1944). Nephrotoxicity (toxicity in the kidneys) becomes evident in rats after 48 hours of intravenous streptothricin administration of 40mg/kg.

The opened lactam ring is considered responsible for the toxicity of kidneys (Inamori et al. 1979).

16 Common Questions About Nourseothricin
This article gives you quick answers to some very common questions when working with Nourseothricin...
Nourseothricin Overview
Nourseothricin is an aminoglycoside antibiotic and is a mixture of streptothricin D and F (&gt;85%),...