DNase: The History Behind The Name

What is it about a name that gives us that sense of solidity, structure and instant recognition that, as humans, we seem driven to possess? From the dawn of mankind, we have endeavored in the naming of the world around us. And for the last few centuries, modern scientists have wrestled as the current arbitrators of the naming of things, whether that be creatures or organisms, chemicals or byproducts, everything from planets, stars and galaxies to organs, cells, organelles, atoms or quarks. Scientists seem even more driven to derive the most absolute, unquestionably succinct name for each new discovery (caveat: I am fully aware that there are some notable exceptions to this statement). But it’s as if, in naming the unknown as precisely as possible, we can inherently shine a spotlight on our discoveries for all future generations. And maybe that’s the key. So much of what we work on in science is just beyond the range of what we can physically see. Nobel awards have been given to scientists for the discernment of the actual structure of the important parts of our world, such as Watson and Crick did in their discovery of the structure of DNA. 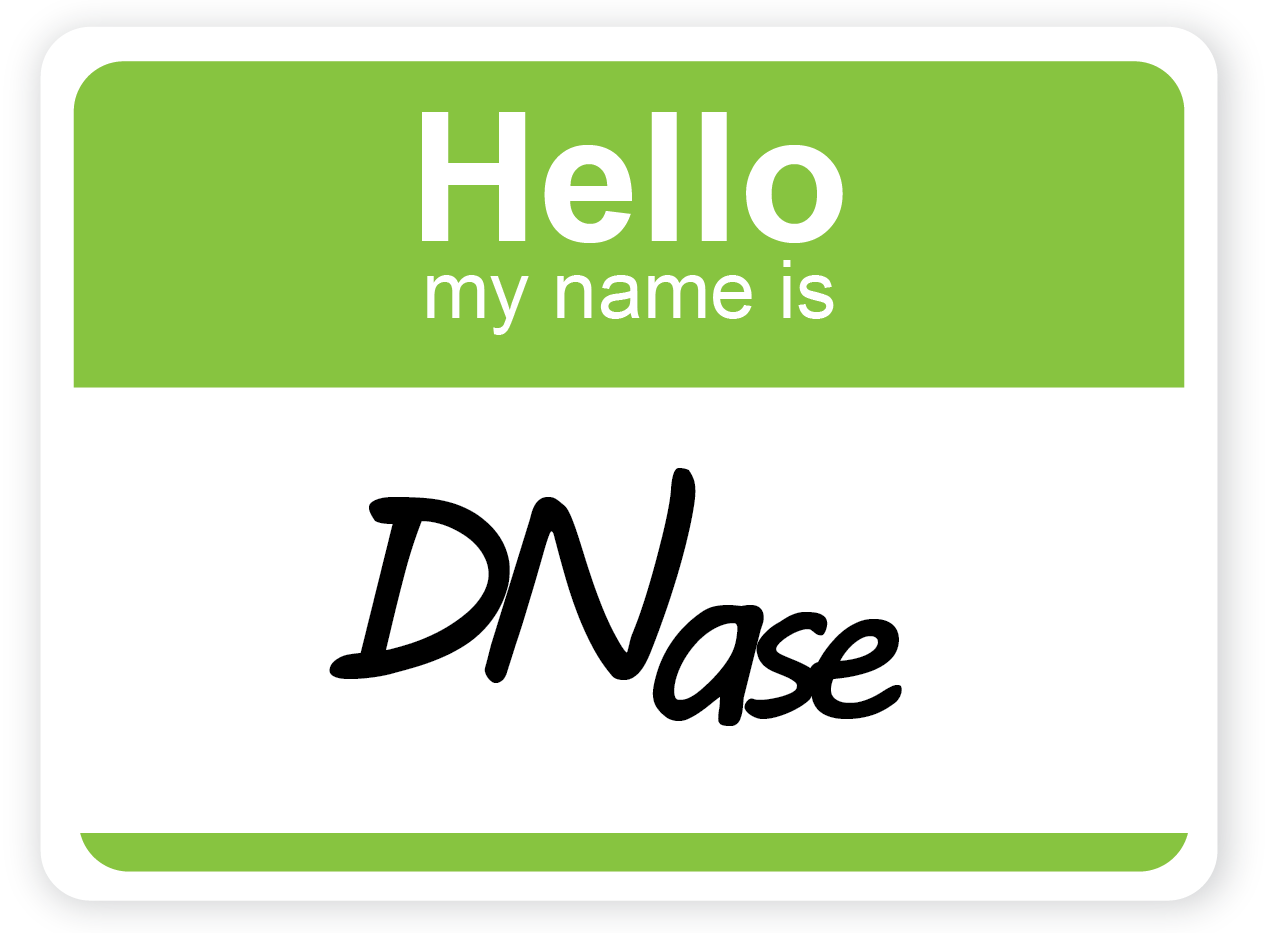 But in the darkness before discovery, figuring out what to call something is similar to the SyFy Channel‘s game show “Total Blackout” in which contestants must work while completely blind to identify things with by feel, smell, taste or sound. The results are usually humorous to those of us who can watch with special cameras. In science, the answers are often teased apart, strand by strand, sometimes even with significant setbacks, until the full understanding can be revealed. Names for these blind discoveries are given all the while, revised, debated, discarded and then eventually accepted as the norm. The history and naming of DNase is one of these kinds of discoveries.

Deoxyribonuclease, as a tool, was likely discovered via ground up bovine organs (like the pancreas, liver, or spleen) in the mid to late 1800s. Though its use was known, the specifics of what was causing the observable enzymatic reactions remained a mystery. In 1903, the enzyme was being characterized by its activity on nucleins (Araki, 1903). Later, researchers would rename it based on what they were seeing the enzyme break down; Phoebus Levene and Florentin Medigreceanu attempted to characterize it as a “thymus” nucleinase in 1911, Robert Feulgen defined it as a “nucleogelase” in 1923 and 1935, Jesse Greenstein labeled it a Thymonucleodepolymerase in 1943. Then, in 1946, Michael Laskowski stated that the name should be officially amended to either Deoxyribonucleinase or Deoxyribonuclease depending on where the hydrolysis was occurring.

The issue here is that not only were these esteemed biochemists working in the dark about the enzyme, they also suffered from a limited understanding of the particulars of the cell itself. If asked to characterize something by touching alone, how can you do so if you don’t understand the difference between round and square? It took a few more years of characterizing the nucleus of the cells, of DNA in particular, and finally the crystallization of DNase by Moses Kunitz in 1950 to firmly settle the matter of the name (Fun Fact: Kunitz was nominated 3 times for a Nobel Prize for his work in this field, but never received the award).

With the establishment of an accurate name, science can more precisely utilize a biological tool like DNase. Since Kunitz’s final characterization of the enzyme, DNase has been cited over 100,000 times in pubmed. It has been cloned and expressed in E. coli, and is even still being characterized by scientists for characteristics such as its specificity (Heddi, 2010) and binding activity. More recently, GoldBio’s DNase was utilized in the understanding of the expression patterns of Fragile X syndrome (FXS), a common inheritable genetic mutation causing autism spectrum disorder (ASD) (Wallingford, 2017).

Research such as theirs is instrumental in the continued understanding of our world and ourselves. And as we increase in our understanding of how things work, we can begin to more precisely intervene and continue the fight against the nameless (and sometimes named) monsters that still frighten us in the dark.

How to choose the right Agrobacterium vector for plant transformation
One of the key factors influencing an Agrobacterium-mediated gene transformation is the vector sel...
DNase: The History Behind The Name
What is it about a name that gives us that sense of solidity, structure and instant recognition that...
Behind Honey's Healing Power
For a few millennia, mankind has used honey as food and a healing agent without knowing how it worke...